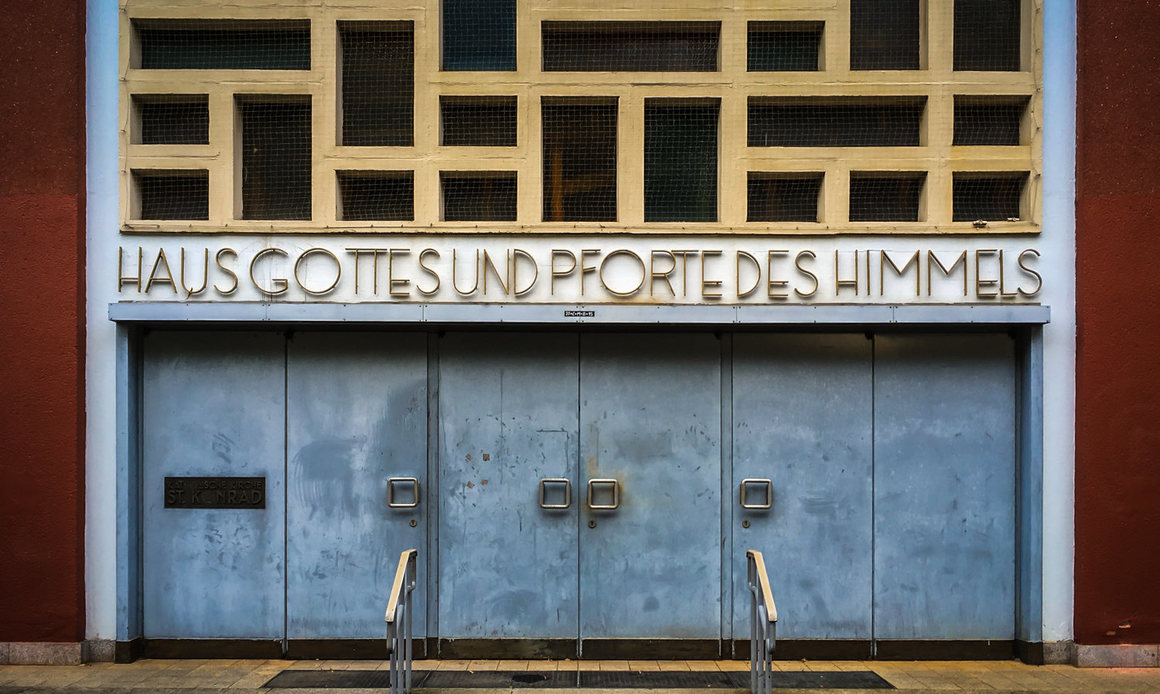 Perhaps we all harbor selected minor fascinations, all the while knowing we’ll never gain more than an ephemeral knowledge of them. Typography’s like that for me.

A text is a se­quence of words. A text stays the same no mat­ter how it’s ren­dered. Con­sider the sen­tence “I like pizza.” I can print that text on a piece of pa­per, or read it aloud, or save it in a file on my lap­top. It’ll be the same text, just ren­dered dif­fer­ent ways—vi­su­ally, au­di­bly, digitally.

But when “I like pizza” is printed, ty­pog­ra­phy gets in­volved. All vi­su­ally dis­played text in­volves ty­pog­ra­phy—whether it’s on pa­per, a com­puter screen, or a billboard.

It’s my guess that typography never occurred to me until I had spent ample time in Europe. At some point, I began to notice these visual distinctions. Appropriately, divided Berlin was a bountiful place to note the differences to be found between West and East.

Reading this article is a melancholy experience. Soon, when I get around to digitalizing the slides from Berlin in 1989, a stiff drink may be required.

A tour of the city’s most striking signs.

Jesse Simon was walking around Berlin’s Lichtenrade district one summer evening in 2016 when he had a epiphany. He’d done a lot of exploring since he’d arrived in the city four years earlier. He’d wandered through different neighborhoods and, as a former graphic designer, had noticed signs across the city: street signs, signs for public transport, storefronts. He’d even been thinking about writing a book on how Berlin’s typography contributed to its visual identity. And then he strolled past a seemingly innocuous brick-fronted store.

“I came across a sign for a shop called Betten-König, an exquisite, yellow, cursive neon sign attached to the façade of what otherwise looked to be a fairly modest shop,” Simon recalls. “Something snapped into focus.” He realized that he’d been thinking about Berlin’s civic and commercial signs only in terms of their function. And yet, “this Betten-König sign, which seemed somehow too grand and too glorious for its purpose, was doing something entirely different. It brought a kind of joyous irreverence to the street,” he says.

This realization led Simon to launch Berlin Typography, a project that documents his city’s typographic glories. “There were dozens, perhaps hundreds of similarly wonderful signs—highly individual, sometimes deeply quirky, often strikingly beautiful—scattered throughout the city. I had walked past them countless times, but had never registered quite how much they contributed to the character of the street and the city.”

There was another motivation for the project, too. Berlin currently has the fastest-growing property market in the world. Its economy is thriving, and as a city rapidly changes, so too do its signs. To Simon, Berlin’s signs “offered a direct line to a different city, a version of Berlin that had once existed but had now almost completely vanished. I felt the need to start documenting these artifacts before it was too late.”

He began to explore Berlin anew, this time armed with a camera. “Since then I’ve been trying to cover as much of the city as possible, and the more places I visit, the more I begin to understand the patterns and themes that give Berlin’s typography its own particular character.”

Simon now has, he estimates, around 3,500 photos of Berlin’s civic and commercial signs, and there is still much to document. “Instead of writing a book I ended up taking a bunch of pictures, which, in terms of writing, is an impressive feat of procrastination,” he says. “But the text will come eventually. In the meantime, there are the images, which I hope convey something of the joys and delights of Berlin’s typographic legacy.”

Atlas Obscura spoke to Simon about typographic patterns, the difference in sign styles between the former East Berlin and the former West Berlin, and how the city’s booming property market is altering its visual landscape. You can see more of Berlin Typography on Twitter or Instagram.