The city’s newly ordained symbol is an anchor buried beneath the Ohio River mud flats, but there are no brakes on the Gahan Campaign Finance Express.

The Jeopardy! question: “How important is campaign finance to Mayor Jeff Gahan?”

VIDEO: “That’s why we’re here,” Gahan flails amid a pack of lies in this classic footage from last night’s Mt. Tabor project meeting.

There’s a reason why the forever agoraphobic Jeff Gahan’s handlers keep him secured in the bunker, and it’s because the moment any public scenario strays from the script, he cannot improvise. The more he tries, the worse it gets — and the angrier he becomes.

In this video, observe his petulance escalate with each “that’s why we’re here,” until he’s demanding to know why citizens aren’t listening to him, even as he insists his Potemkin facade of a meeting was to prove he’s listening.

As you might expect, crumbs from the absurdly titled Mt. Tabor Road Restoration and Pedestrian Safety Project (did Pinocchio Rosenbarger coin that gem of purely Orwellian Newspeak?) conveniently landed in the mayor’s re-election piggy bank. 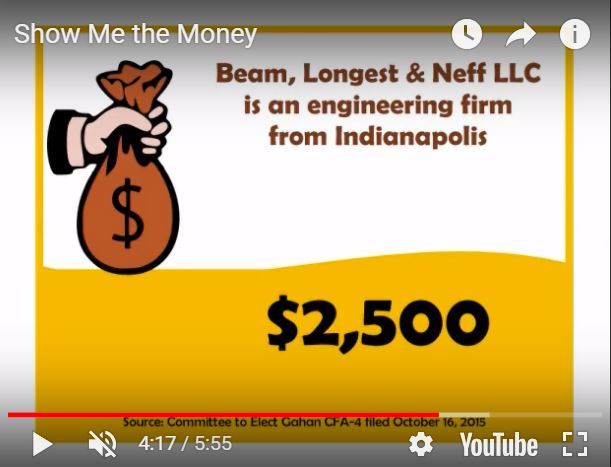 And probably in most other years, too, although those are yet to come in terms of documentation.

But let’s be fair about it, conceding that when you’re a C-minus student on your very best day, sometimes the bright kids can help with term papers.

And they pay YOU to do it.

In 2017, Gahan came close to matching his mayoral salary with donations to his Fund for Future Enfluffment.

Following are a few recently considered examples of buying and selling a city.

Gahan Money Machine 2017: Tens of thousands from corporate outsiders, who by sheer serendipity get lots and lots of work here.

Paving news, but before that, a review of pro-Gahan campaign finance “engineered” by HMB and HWC.

This just in: “I urge We Are New Albany supporters to back LaMicra Martin in tomorrow’s primary.”

ON THE AVENUES REWOUND: Money is the ultimate bully (2015).

The art of redistributive campaign finance: 1st class passengers in the Gravy Train kick the juice right back to Jeff Gahan.