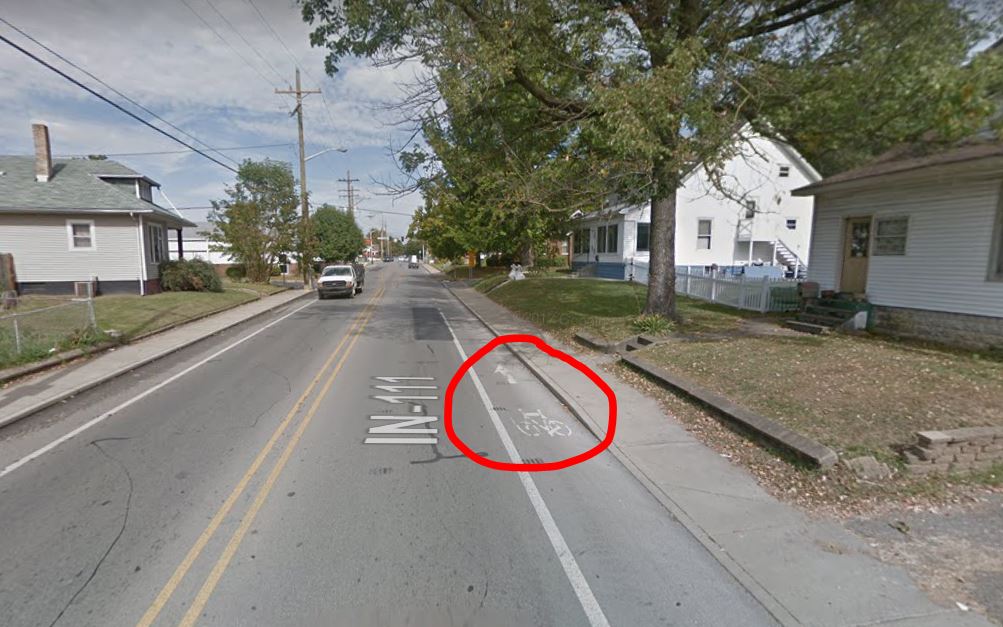 We’ve all been here before, but the fake factoids never cease, so let’s have another look at the question of whether it is legal to ride a bicycle on the sidewalk in New Albany. Not unexpectedly in a state with its own contradictory laws, sections of the official code of ordinances in New Albany don’t jibe.

(D) No person 14 years of age or older shall operate a bicycle on the sidewalks located within the geographical incorporated boundary limits of the City of New Albany (“city”).

73.01 seems to suggest that since no person 14 years or age or older should be on the sidewalk anywhere within the city limits, everyone else should be riding on the street.

Then it gets weird.

(B) No person shall ride a bicycle upon a sidewalk in a business district or upon or along which signs have been erected by authority of the Board of Works prohibiting such bicycle riding.

In 73.03, it’s legal to ride on the sidewalk with no reference to age, except in a business district, which isn’t defined (here or elsewhere in the code), or wherever signs prohibiting bicycling have been erected.

Which is it? Maybe BOW can spin the wheel during its next meeting. In truth, it doesn’t matter much because there is no enforcement of any conceivable interpretation.

As for which direction a bicyclist should travel when riding on a street, it should stand to reason that if the code of ordinance explicitly holds bicyclists riding in the street to the same duties of motorists, and it does, then these duties include riding in the same direction as traffic, seeing as a driver wouldn’t decide to drive against traffic — for the very same safety reasons as a bicyclist shouldn’t.

Lots of us were taught as kids to ride facing traffic … this sense of safety is tragically false, but that doesn’t stop it from being widely believed – especially if your last lesson in bike safety was when you were seven.

Even closer to the center of the target:

When you see someone riding the wrong way on a bike, the chances are good that they have chosen this as a crummy alternative to an even crummier series of major roads and horrifying intersections.

Yesterday during a conversation at Facebook, some guy living in Harrison County insisted that bicycle licensing is the answer to all these issues: “I believe that it (licensing) should be on the books and enforced. Especially with bike lanes now prevalent like never before.”

Bike lanes prevalent? It’s hard to believe bicycle lanes in New Albany amount to more than a few single digit percentage points of the street grid’s total acreage. Perhaps it seems like more for folks living in mobile homes by a cornfield.

Bizarrely, until recently, the city of New Albany had bicycling laws on the books, dating from the aftermath of the Great Flood.

Rewind: Bicycles, mopeds and the ordinances not governing them.

§ 73.20 LICENSE REQUIRED BEFORE OPERATING BICYCLE.
No person shall ride or propel a bicycle upon any public highway, street, boulevard or other public place in the city, unless the same shall be licensed as herein provided.
(’71 Code, §73.28) (Ord. 4120, passed 3-6-39)

In summary, city government’s relationship with the street grid is devoted roughly 95% of the time to assuring drivers that car-centrism is king. There are no stated policies v.v. bicycling (or walking), no goals for improving non-automotive access, and no evident will to improve. If you’re interested in this changing, then it’s time to begin holding feet to the fire — and next year, when there’s a municipal election, you’ll have the opportunity.