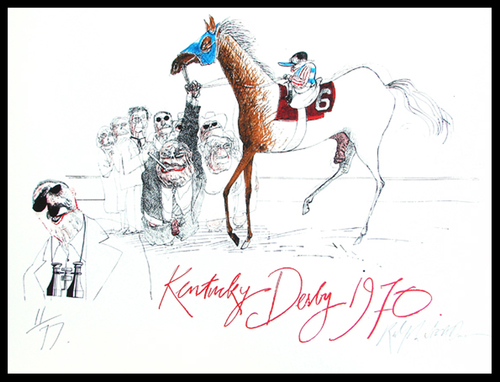 ON THE AVENUES: Sadly, the Kentucky Derby no longer is decadent and depraved. It’s just another vacuous capitalist bait ‘n’ switch.

Everybody’s working for the weekend.
— Loverboy

(Ralph) Steadman wanted to see some Kentucky Colonels, but he wasn’t sure what they looked like. I told him to go back to the clubhouse men’s rooms and look for men in white linen suits vomiting in the urinals. “They’ll usually have large brown whiskey stains on the fronts of their suits,” I said. “But watch the shoes, that’s the tip-off. Most of them manage to avoid vomiting on their own clothes, but they never miss their shoes.”
— Hunter S. Thompson

It’s getting better all the time, except when it isn’t. That’s why the Great Pumpkin invented gin.

The insipid cacophony of Blunder Over Louisville has receded from view, and the most recent iteration of Kentucky Derby Festival hyperbole approaches its yearly sell-by date.

Soon our peculiar institution, otherwise known as the Run for the Roses – or, the greatest two-minute anticlimax in all of sports – mercifully concludes, freeing the dazed masses to return to exurban multiplexes for repeat viewings of whatever comic-book-derived motion picture drivel currently diverts their attention from facing up to the daily challenges of this decidedly uncivil society.

By then the two-week expanse of festive revelry will have rendered half a month null and void as they pertain to any semblance of useful activity. Insightfully, though not judgmentally, visitors entering the gates of European cities in medieval times wrote of rampant public drunkenness, especially during celebrations, with people sprawled insensate in the streets amid mounds of garbage and excrement.

Mud, blood and beer; all merely natural states of urban occupancy. 700 years later, on Sunday, numerous residents of Louisville metro likewise will find themselves lying prone on the toasty tarmac; chewed up, spat out, and duly prepped to begin queueing at local rehab clinics. Let’s hope they bathe first, but maybe cynics like me will get lucky and it will rain all day Saturday.

Meanwhile the world’s foremost horse pimps, with their entourages of low-paid attendants and exploitative regalia, already will have traveled to fresh drugging grounds elsewhere in pursuit of the Triple Crown, which now trails full-contact tiddlywinks in the spectrum of TV sports ratings, but almost made sense back when previous masters like Heywood Hale “Woody” Broun appeared on black and white television doing commentary at Churchill Downs, Pimlico and Belmont Park.

If you’re getting an impression of personal distaste about the Kentucky Derby, that’s only because it’s entirely true. As I’ve often observed, ruinous mint juleps and atrociously unflattering hats don’t function as aphrodisiacs in my rarefied world, and yet someone always asks if I’m excited by this most over-rated time of year in Louisville metro.

It’s fine by me if the Kentucky Derby is your kind of gig, so please go forth and have right at it. Just count me out, and kindly refrain from stepping on my lawn this Saturday unless you’re bringing delicious bottles of Schlenkerla Rauchbier to accompany our projected roast beast.

Then everyone can be happy, as opposed to the flag-waving idiocy of Blunder, when the noise is impossible to muffle no matter how much I drink.

And I drink a lot whenever warplanes strafe my house.

For some, especially non-gamblers, the Kentucky Derby is a time to admire the innate beauty of horses. Indeed, they’re splendid animals, albeit regrettably subjected to criminal interference by humans when it comes to thoroughbreds being genetically engineered for the sole purpose of maintaining the custom of wagering and the devastating addiction it often spawns.

Kentucky Derby fest season also is a time for lowlifes like me to obey the one-percent’s finger-wagging instructions by displaying a proper veneration for upstart new money, inbred old money, ephemeral showbiz glamor, ostentatious (read: tacky) parties, and conspicuous consumption by our presumed “betters” of such a vapid intensity that by all rights the spectacle should impel us to commence the instantaneous honing of curative pitchforks.

Happily, the Kentucky Derby is a time for filling the Crescent Hill Reservoir to the rim with bourbon – here, at last, we find a genuinely positive attribute of the season, so please do me a favor and save that detestable mint for chewing gum or some of the wonderful chilled yogurt soup the Greeks do so well in summer.

As a lifelong contrarian, I’ll take my bourbon ration served neat, then immediately trade it for requisitely peaty drams of Scotch. On the big day, I plan on stocking plenty of hooch and keeping the doors to the 1117 East Spring Neighborhood Association firmly bolted, because in addition to the horse races, the date of May 5 in the year 2018 doubles as Cinco de Mayo, which is fast approaching St. Patrick’s Day as an expression of sheer amateurism among my fellow Caucasians, AND the last Saturday of invasive voter canvassing prior to the Indiana primary next Tuesday.

I just might be compelled to booby trap my porch with tarantulas and other deadly cargo.

(Reigler’s) affinity — or awareness, we should say — for bourbon came much earlier in her life, when she would spend Saturdays at Churchill Downs with her family.

“The track in those days always smelled of old wood, cigars, popcorn and bourbon — quite a special combination,” says Reigler.

In spite of all my cranky bluster, I can relate to these sentiments. There’s a part of me that genuinely appreciates the old-school, tactile joys of the pre-intravenous ponies, the shabby and dung-laden track, and the laid-back Southern culture that used to characterize this scene.

The native Louisvillian writer Thompson grasped it better than most, and his 1970 account remains essential reading precisely because it deconstructed the mythology and described what the Kentucky Derby symbolized — what it “was” — with what it very shortly would become:

(The Texan) had, after all, come here once again to make a 19th century ass of himself in the midst of some jaded, atavistic freakout with nothing to recommend it except a very saleable “tradition.”

Around the same time, I can remember Broun doing his televised racing commentaries — and the man could write, too.

To be great, a horse must have metaphorical wings. In mythology we punished wax-winged Icarus for flying too close to the sun, but in recognition of the nobility of their singlemindedness, mythology has let the chariot horses of Apollo traverse the sky. Race horses do not chaffer over money, get into bar fights or endorse horse blankets and aluminum shoes. They combine strength, grace, beauty and speed as perhaps no other link in the Darwinian chain can manage (cheetahs have funny-looking shoulders).

There was a certain poetic flair, albeit oblivious, to the way the Courier-Journal of old used to cover the varied expressions of Churchill Downs pageantry, a quality of an indefinable “something” both venerable and genteel involving rites of spring, colorful flowers, exclusive balls and parties, and as a last resort, the horses themselves. Customs were handed down from one generation to the next, and honored.

Compared to what the Downs and the Derby have become in this time of celebrity-besotted, Disney-cum-Vegas plasticized swipe-card, UPC-tattooed entertainment experiences, 1970 might as well have been 1905.

Listen, I’m not delusional. Breeding horses for racing, wagering on them, smoking, drinking, eating and all the social constructs draped around the experience always had to do with shaking down suckers, first and foremost.

It’s understood, although I submit that during the course of my own life – perhaps as a result of globalization, or Reagan’s trickle-down, or the entire business of America’s business becoming a 24-hour-per-day psychological waterboarding designed to sell, sell, sell – most of the tradition and authenticity have been drained away, or perhaps stripped and flipped like the Yankee Stadium demolition and rebuild, yielding an improved model in which every last corpuscle of sculpted cement, fake wood and pastel color is calculated for one reason and one reason alone – to ensure that fools and their cash are expeditiously parted now, as a racetrack, and then even more so later, somewhere down the way, as a casino.

But enough of the Kentucky Derby’s deleterious implications for human civilization.

Let’s talk about beer. In 2018, for the first time in six years, the “official” beer of this signature institution known as Churchill Downs no longer is Stella Artois, the chosen import of AB-InBev’s payola empire.

Now it’s Corona, perhaps the most vile mainstream corn-choked Mexican lager atrocity known to man, reminding us that while the Kentucky Derby has developed intrinsic traditions since its inaugural run in 1875, locally brewed beer hasn’t always been prominent among these predispositions. After all, bourbon gets you there way faster.

We can surmise that in the oldest of far-off times, there’d have been plenty of local beer to celebrate the annual race, at least prior to the idiotic onset of Prohibition, which rendered the United States a planetary laughingstock.

After glorious Repeal, local beer returned, but when the original Falls City swapped its fermenters for a fleet of semi-trailers in 1979, there was nary a single drop of hometown beer left to drown a wretched punter’s sorrows until 1993, when Sea Hero’s triumph may have been marked by a few hardy and pioneering microbrew fans drinking David Piece’s Silo Red Rock Ale from a growler on their porch with a radio nearby, because then, as now, the very last situation you’d expect to experience in this life is local beer at Churchill Downs — where first Stella, and lately Corona, is the official multinational-beer-of-choice, and there’s barely any incongruity worth noting because the multinational track itself has little to do with the schizophrenic city and impoverished state in which it resides.

Here, there and everywhere: when the real money is at stake, you can be sure that soulless neoliberal capitalism will be oozing through the keyhole, breathlessly drooling in anticipation of sponsorship opportunities, with conceptual coherence always taking a back seat to the sheer weight of numerically amassed ending zeroes.

First Stella, now Corona. Maybe next time it will be Molson. There’s plenty of time for an experiment, so go out and assemble a committee of horse pimps. We’ll see if any of them can spot the difference between the watery, beer-scented banality of Corona and those equally reeking buckets of equine drug-testing residue over there where the inspectors are being paid off.

It’s not a trick question, you know.

April 26: ON THE AVENUES: The wonder years.