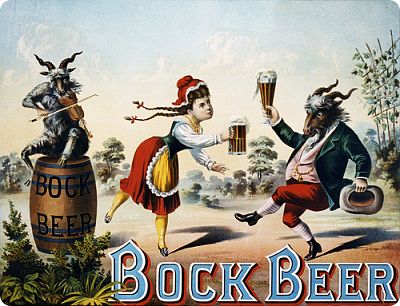 Doppelbock is the perfect example of a seasonal beer style redolent of history and faraway places, and yet deemed insufficiently sexy for narcissistic, hop-laden, shoe-gazing geeks.

No bitterness in this soul, mind you.

There actually was a Bock Fest in NuLu yesterday, and maybe I should have gone over and taken stock, but after being in Munich 20-odd years ago during Starkbierzeit (strong beer time) … well, you know.

It might not be the same, although I commend the organizers for furthering Bock recognition in Louisville.

Apart from every other consideration, and whether one prefers malty or bitter, it is the seasonal nature of Doppelbock that we found enticing during the dawning age of better beer consciousness. Celebrator and Salvator were available during the warm weather months, but who wants to drink them in July?

Summertime was, and remains, intended for Bavarian-style wheat ale.

Even before the inception of Gravity Head, we’d time the arrival of draft Doppelbocks at the Public House for the Lenten season, as in Bavaria. More often than not, is was still chilly outside. In a word, ideal.

At Pints & Union, we’ll keep a bottled version of Doppelbock (as well as Hefeweizen) year-round, but there’ll be only two spare faucets for rotating drafts, and these will be scheduled to pour as we used to do it, traditionally and seasonally.

No one ever described the theory and practice of Doppelbock quite as wonderfully as the late Beer Hunter, Michael Jackson. This piece is from 1998.

Bock brings the Germans rushing to the beer garden

After the dark months of winter, the Bavarians are now venturing cautiously into their beloved beer gardens, even though the weather is not yet reliably warm enough to ensure comfort.

They can always give themselves a little central heating with a Bock Beer. In Germany, this is a brewery’s strongest beer, unless – as is often the case – it also has a “double” Bock.

Both variations are seasonal specialties for cool weather, and the Doppelbocks are especially associated with Lent. Extra-strong beers were originally made at this time of year by monastic breweries as “liquid bread” to see the brothers through the weeks when their diet forbade not only meat but also fish.

The notion of beer as liquid bread is not fanciful. In the dawn of civilisation, bread was baked as a raw material for brewing and in some corners of the world “traditional beers” are still something of an alcoholic porridge.

A rich, malty beer like a Doppelbock is quite filling and does not, like the lighter, hoppier styles, further arouse the appetite …