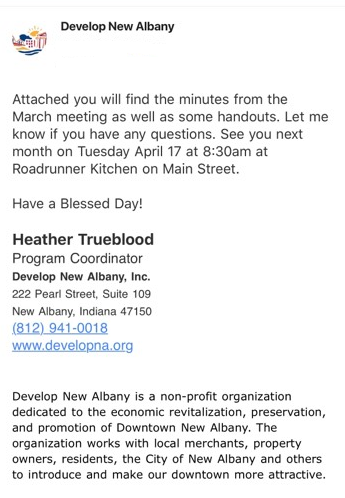 It’s like pulling teeth, but we all must practice dentistry on occasion.

Regular readers will recall NA Confidential’s frequent and fruitless attempts to engage Develop New Albany in dialogue, something our taxpayer-supported, captive arm of City Hall event planning apparently has been told to refrain from so much as even attempting.

Heck, they won’t even acknowledge my e-mails.

“We used to receive notifications about the monthly merchant meetings on third Tuesdays of the month at 8:30 a.m., as well as follow-up e-mails with the previous meeting’s minutes, but somehow (inexplicably) these have stopped arriving, so could we please be placed back on the mailing list and kept informed about future meetings?”

After all, if you look back into the blog archives, I’ve always done my little bit to encourage attendance at these meetings, and to participate constructively.

And, before anyone asks, be aware that as recently as February 27, 2018, I remained the part-owner of a downtown business (NABC) and at this precise moment, I still am a business owner: Potable Curmudgeon Inc., parent company of pro bono and profit-free NAC, at 1117 E Spring Street.

DNA receives a level of annual support from the city; I don’t know how much, but when I served on the DNA board, it was $5,000. The money comes from tax revenues by one route or another, and as a taxpayer and citizen, I’m just as entitled as anyone else to (a) acknowledgement, and (b) inclusion on mailing lists.

I strongly suspect the directive to muzzle me emanates from DNA’s governing board, not a lowly staff person, and as such, every time I’m treated as non-person, the raging pettiness merely confirms my point about improper non-transparency, which DNA’s board seeks to deny.

The Green Mouse has done some brief digging, and informants are plentiful. Thanks, guys. The next merchant meeting is on April 17, at 8:30 a.m., at the new Roadrunner Kitchen (145 E. Main).

And now, Morrissey with the coda.