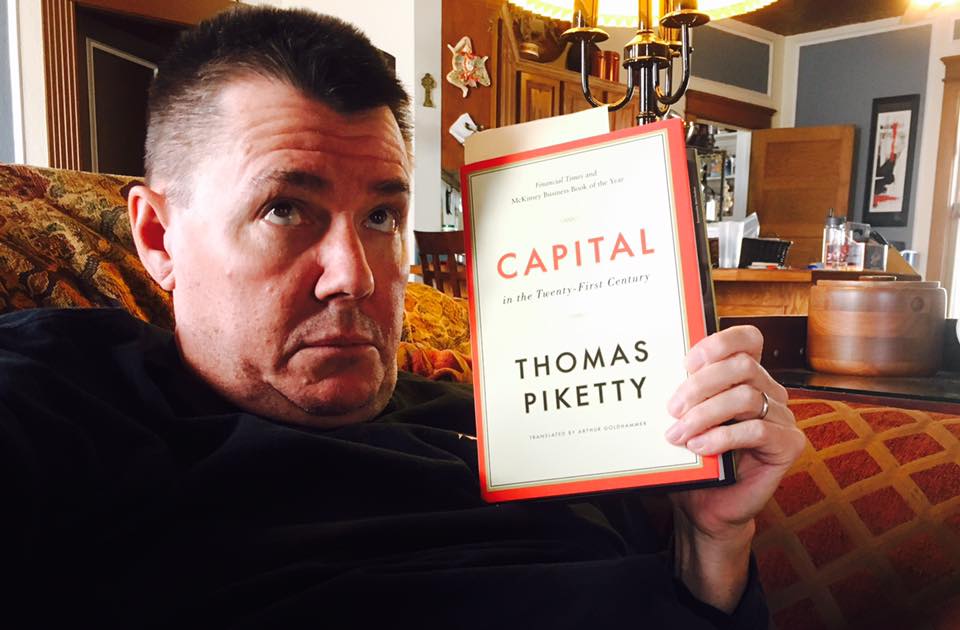 I’m old, and the memory gets hazy.

Can someone refer me to to section of the Constitution where it stipulates capitalism?

On a daily basis since kindergarten, someone always is hovering near, insisting I must worship something, whether god, flag or economic system.

I still feel the same as I always have. For so long as they’re tolerable, okay — but stay off my porch, please. Indoctrination never has been confined to a particular system of thought. Sorry, but I’d rather drink myself to death.

Following are three articles about capitalism — directly as well as indirectly.

Capitalism as Obstacle to Equality and Democracy: the US Story, by Richard D. Wolff (CounterPunch)

The conclusion to be drawn from the US story is not that efforts to reverse deepening inequality are foredoomed to failure. It is to face the fact that mere reforms such as tax law changes are inadequate to the task. To make reforms stick – to overcome temporariness across so many histories – requires going further to basic system change. Because capitalism tends toward deepening inequality and can defeat reversals by keeping them temporary, it is capitalism that must be overcome to solve its inherent inequality problem.

… Capitalists routinely exert leverage over governments by withholding the resources — jobs, credit, goods, and services — upon which society depends. The “capital strike” might take the form of layoffs, offshoring jobs and money, denying loans, or just a credible threat to do those things, along with a promise to relent once government delivers the desired policy changes.

Government officials know this power well, and invest great energy and public resources in staving off fits by malcontent capitalists. The profoundly rotten campaign finance system is just one manifestation of business’s domination over government policy. The real power resides in the corporate world’s monopoly over the flow of capital.

Buddhist Economics: How to Start Prioritizing People Over Products and Creativity Over Consumption, by Maria Popova (Brain Pickings)

Much has been said about the difference between money and wealth and how we, as individuals, can make more of the latter, but the divergence between the two is arguably even more important the larger scale of nations and the global economy. What does it really mean to create wealth for people — for humanity — as opposed to money for governments and corporations?

That’s precisely what the influential German-born British economist, statistician, Rhodes Scholar, and economic theorist E. F. Schumacher explores in his seminal 1973 book Small Is Beautiful: Economics as if People Mattered — a magnificent collection of essays at the intersection of economics, ethics, and environmental awareness.