I don’t remember much about my first trip to Portugal in 2000, but the country’s ubiquitous azulejo tile murals and decor have always stuck with me — like the reaction I had upon arrival at the Pinhão Railway Station.

Pinhão Railway Station is a beautiful train station along the Douro Line, one of the most iconic rail journeys in Portugal. The station is a major tourist destination in the Alto Douro Wine Region. The first train arrived at the Pinhão Railway Station on 1 June, 1880, and for nearly one hundred years the station served as the primary transport site of people and goods into and out of the Douro Region. It was particularly important in the production process of the Douro Valley’s Port wine. 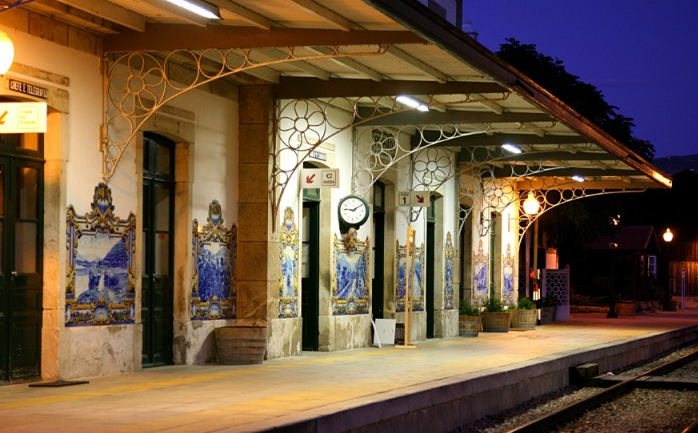 That’s right; as incredible as it seems, the beautiful tile work is at a train station.

Azulejos date as far back as the 13th century, when the Moors invaded the land that now belongs to Spain and Portugal, but they secured their foothold in Portuguese culture between the 16th and 17th centuries. The word azulejo stems from Arabic roots, meaning ‘small polished stone’. Originally they were fairly simple structures cut into geometric shapes in neutral tones.

It wasn’t until Portugal’s King Manuel I visited Seville and brought the idea back, that Portugal truly adopted this artwork into its culture. The tiles were used to cover up the large areas of blank wall that were common inside buildings during the Gothic period.

Antique azulejos were decorated in a simple color palate, dominated by blues and whites. It is believed that these colors were influenced by the Age of Discoveries (15th – 18th centuries) and considered fashionable at the time. The other colors that appeared were yellow (sometimes looking gold) and green …