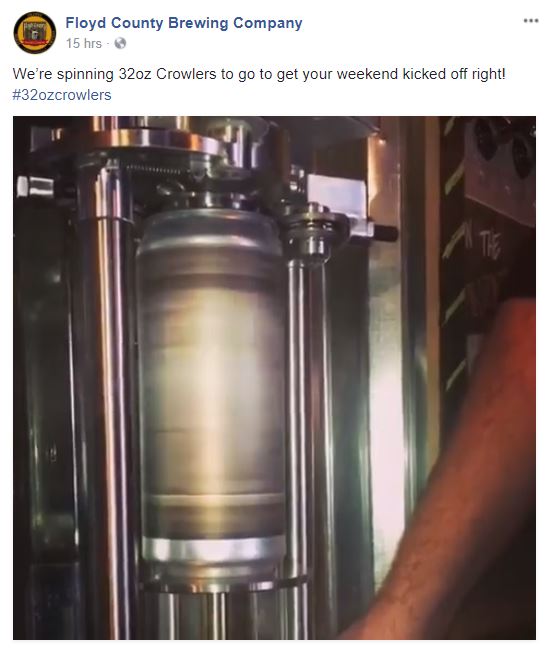 Before I proceed, heartfelt thanks to everyone who commented and asked questions as our big news leaked out earlier this week.

I’m never without illusions as to how much work is yet to be done, but the karma is good and we’re looking forward to getting it done.

So it was that yesterday I was hanging on for dear life to Floyd County Brewing Company’s bar, when I noticed the new gadget behind the bar. The Ball Corporation explains.

INTRODUCING THE CROWLER, WHERE THE CAN MEETS THE TAP.

The beer can revolution is taking on the tap with Ball’s new innovative Crowler can. It’s a 32 ounce, Growler-sized can that allows your customers to take their favorite draft beer home with them. Once filled at the tap, a Crowler lid is sealed with a bar-top seamer, so people can bring home your hand crafted beer in a package that keeps it the way you intended it because the Crowler has the superior qualities of aluminum, like the ability to block out light and oxygen, as well as provide a sharable, 100 percent recyclable container. Call it a big, 32 ounce “cheers” to your craft beer business.

Crowlers aren’t new as such, but they’re new to New Albany, so stop by FCBC, watch the show, and buy a can of beer to go.

You’ll recall that Over the 9 closed in January.

Thank you to all the patrons we have serviced over the years here at Over the 9. Unfortunately, we will be closing our doors for 2018 as a full service restaurant/bar and creating a venue space for exclusive parties and events. For more information regarding the event space and reservations, please contact logan@old502.com.

A few days ago Old 502 Winery (@Old502) tweeted that the event space and enlarged tasting room in the former Over the 9 space was ready. I asked if this new area would offer Falls City beer as well as wine from Old 502.

Yes, we will be offering beer flights in addition to wine tastings. And you will still be able to purchase beers from the bar.

Jeff Gillenwater provides this link to a brief overview of efforts “down South” to conjure a contemporary beer terroir. To me, this sort of thinking makes sense as it pertains to Americanized Saisons and sours.

What Is Southern Beer?, by Bob Townsend (Bitter Southerner)

But more and more, that sort of sense of place is being discussed in terms of the unique characteristics of the soil food crops are grown in or the aquaculture of oyster farming.

And all around the South, many breweries have been sprouting up taking a cues from those ideas, while finding inspiration in the Old World farmhouse brewing practices of Belgium and France.

Indiana’s legislative season is rapidly drawing to a close. Following is an excellent, locally written overview of the perennial weirdness of Indiana’s Sunday (and cold beer sales) restrictions, and how some of these will be changing.

Sunday alcohol sales expected to have little impact. So why was it so controversial?, by Danielle Grady (News and Tribune)

INDIANA — Ask an Indiana resident if he or she favors Sunday alcohol sales, and the answer is likely to be yes.

A June study conducted by Ball State University and Old National Bank found that a majority of Hoosiers, 58 percent, supported allowing stores to sell alcohol on Sunday, which has been outlawed since prohibition ended way back in 1933.

This year, the possibility of being able to walk into an Indiana store and buy a six-pack of beer or a bottle of wine seems more likely than ever.

Thanks to a deal struck between liquor stores and big box retailers in the fall, Sunday sales bills have made it further than they ever have in the state Legislature. Both the Indiana Senate and the House have passed their own version of the legislation. Their bills would allow stores to sell alcohol from noon to 8 p.m on Sundays. The Associated Press reports that final passage of a bill is expected in mid-March, although the law wouldn’t take effect until July.

But the businesses that sell alcohol in Indiana have met the historic news with a lukewarm reception. The state’s liquor, convenience and grocery stores expect to be affected by the new rule if passed in different, but probably not dramatic ways. At the same time, compromises on separate alcohol issues have muted the wins and losses that accompany the ban lift …