“Once you’ve been to Cambodia, you’ll never stop wanting to beat Henry Kissinger to death with your bare hands. You will never again be able to open a newspaper and read about that treacherous, prevaricating, murderous scumbag sitting down for a nice chat with Charlie Rose or attending some black-tie affair for a new glossy magazine without choking. Witness what Henry did in Cambodia – the fruits of his genius for statesmanship – and you will never understand why he’s not sitting in the dock at The Hague next to Milošević. While Henry continues to nibble nori rolls and remaki at A-list parties, Cambodia, the neutral nation he secretly and illegally bombed, invaded, undermined, and then threw to the dogs, is still trying to raise itself up on its one remaining leg.”
― Anthony Bourdain, A Cook’s Tour: Global Adventures in Extreme Cuisines 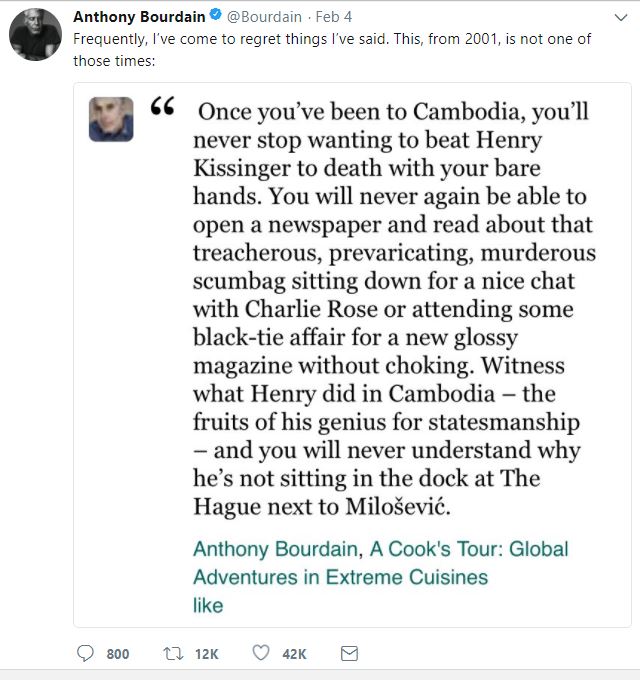 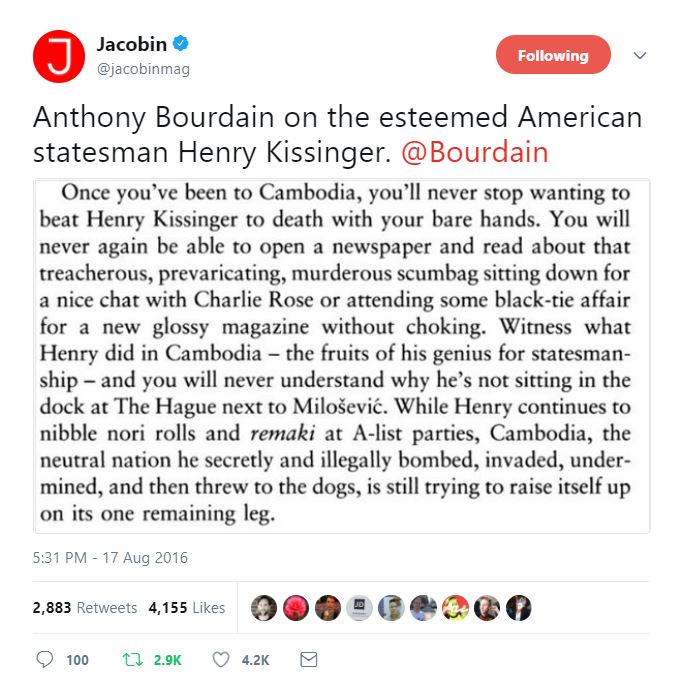 Or, as recently noted at NAC: As if today’s world isn’t grim already enough, let’s revisit Pol Pot and the Killing Fields of Cambodia. In honor of Henry Kissinger’s meeting with Donald Trump later this afternoon …

… it’s worth remembering that Kissinger should be in prison.

During his brief tenure at the forefront of U.S. foreign policy, Kissinger got a lot done. In his first two years in office, he helped Richard Nixon sabotage Vietnamese peace talks for his own political gain, expanded that war into Laos and Cambodia (the destabilizing effects of which would pave the way for the rise of the Khmer Rouge and the death of up to two million people), and advocated the bombing of, in his own words, “anything that moves.”

In 1971, Kissinger backed Pakistan in its war against Bangladesh despite evidence of massacre and rape. In ‘73, he orchestrated a military coup against the democratically elected Allende regime of Chile, installing in its stead the violently oppressive Pinochet dictatorship. And in ‘75, the then-Secretary of State lent his tacit support to President Suharto of Indonesia ― himself a despot already responsible for the mass killings of hundreds of thousands―in the deadly conquest of East Timor. Kissinger himself, in proposing an intervention in Cyprus, summed up his philosophy best: “The illegal we do immediately; the unconstitutional takes a little longer.”

Appalling though this all may be, Kissinger’s most enduring legacy is subtler in its malignance. The foreign policy of Henry Kissinger is defined, above all, by an utter contempt for human life and absolute pursuit of “American interests.” For every one of Kissinger’s crimes that goes unpunished and for every bit of praise he receives, the belief that the United States can do whatever it wants with the rest of the world is further concretized. Behind every thoughtless, disastrous intervention since then―behind the mujahideen and the Contras, behind the Iraq war and the El Mozote Massacre―is the work of Henry Kissinger.