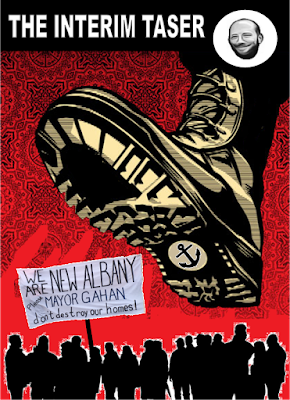 The Green Mouse has learned that David Duggins still hasn’t gotten the memo that intimidation and threats aren’t permissible management tactics at the New Albany Housing Authority — even at his heightened pay grade.

True, the former redevelopment commission chief cashier knows where all the cash-stuffed envelopes are buried … but at what point does Deaf Gahan finally begin to grasp the potential liability — not only to his own bid for re-election, but to the community at-large?

I’ll be discussing Dugout’s latest meltdown at length in Thursday’s ON THE AVENUES column, and meanwhile, the Green Mouse makes this prediction:

Now that Team Gahan knows that we know, expect the public apology from Duggins before Thursday’s column appears, because even Jeff Gahan can’t sweep this transgression under the Down Low Bunker’s soiled rug.

Also: From pizza & matchmaking to threats against public housing residents, our versatile Team Gahan truly does it all.