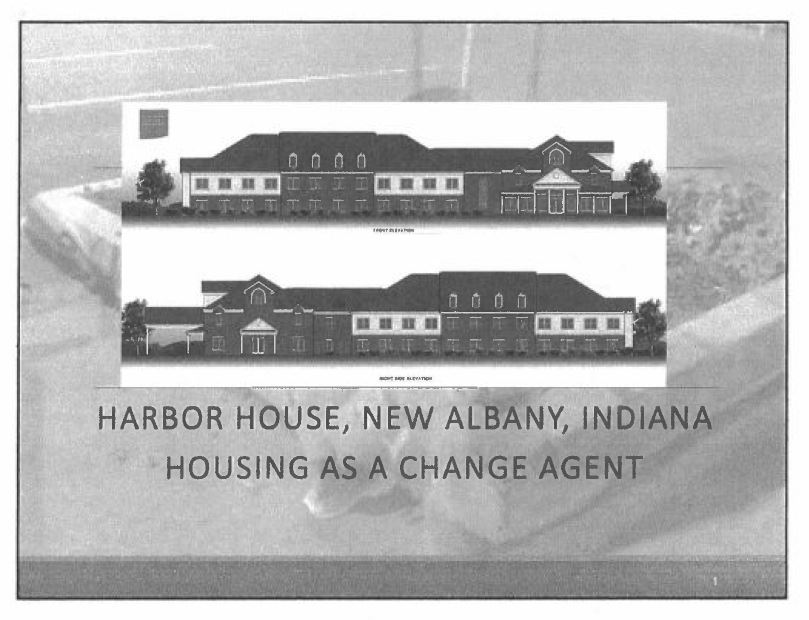 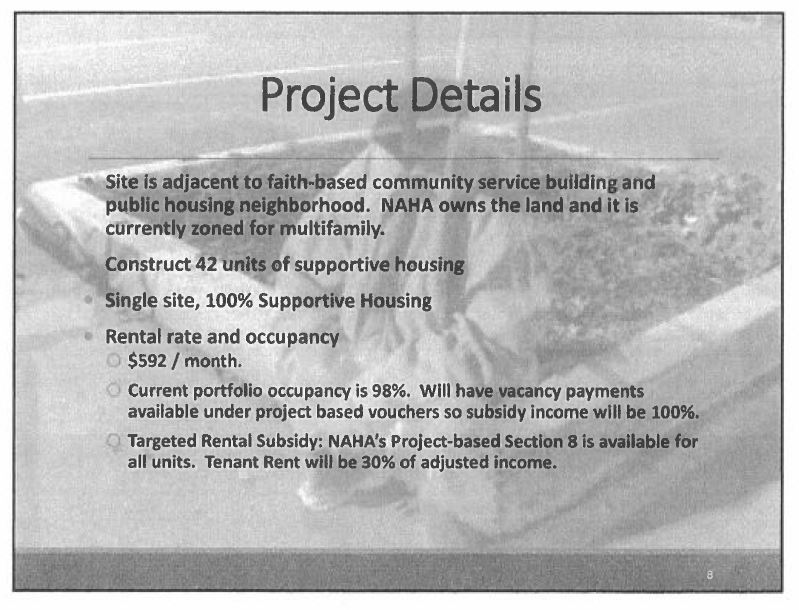 Not long ago, New Albany Housing Authority director Bob Lane and his team had their ducks in a row for 42 new units of supportive housing, to be constructed on NAHA-owned land near the hospital.

All that remained was to get Jeff Gahan’s signature. Had the original time frame progressed, these units would be finished and filling now. Instead, Gahan waited until the last minute to refuse his cooperation, and subsequently, the dominoes started falling in the run-up to the mayor’s hostile takeover of NAHA– and Lane’s cashiering.

Here’s how Lane was running the NAHA. 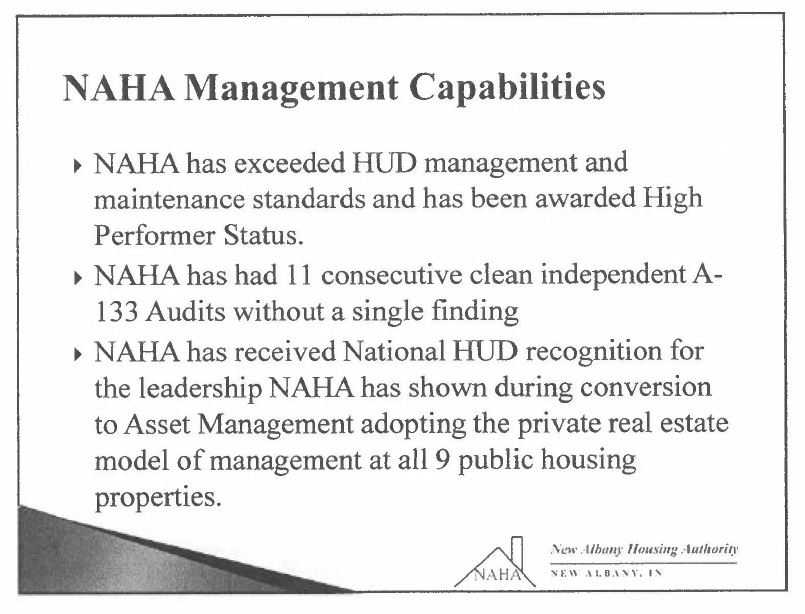 Gahan and David “Double My Salary, Double My Fun” Duggins constantly refer to a future plan for public house, which they don’t have — or wouldn’t they reveal it?

Conversely, Lane had a powerful and comprehensive plan, and had been working on it prior to 2012, Gahan’s first year in office, when these Powerpoint slides were produced. 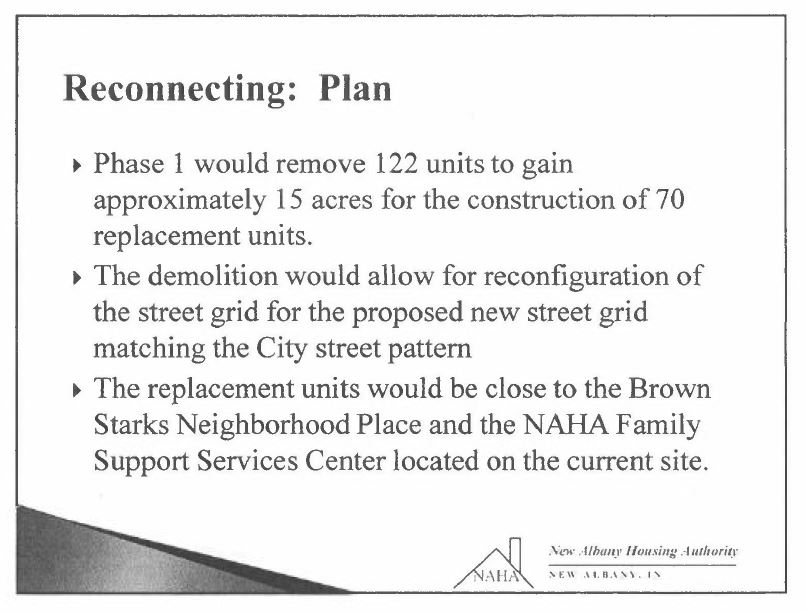 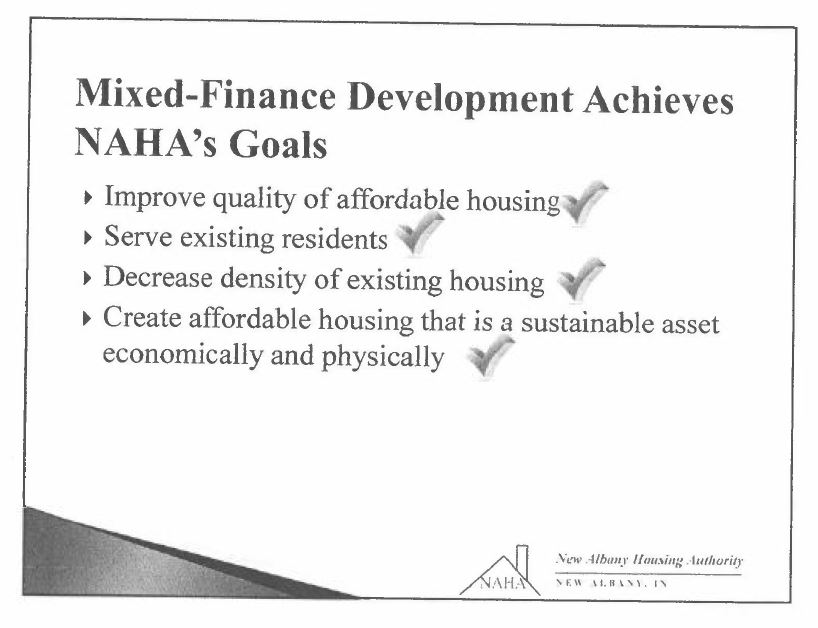 Lane planned to renew NAHA’s properties on a 1:1 ratio, to be achieved in phases over time throughout the city’s existing public housing properties. Not only that, but you’ll note the proposed return to the original city street grid.

Fact: From the moment Gahan became mayor, his own “plan” (note the use of quotation marks, Davey) might have been scratched in pencil on a Roadhouse cocktail napkin: cut the number of public housing units in half, period.

That’s the extent of it. All the verbiage Gahan and his shameless sycophants have emanated ever since is so contaminated with toxins that it would be refused processing at the sewer utility.

Monday is MLK Day, which inspired the News and Tribune.

MLK’s ‘Dream’ yet to be fully realized, local leaders say, by Aprile Rickert

SOUTHERN INDIANA — As the nation looks back nearly 55 years since Martin Luther King Jr.’s ‘I Have a Dream’ speech, local leaders consider how his words are reflected today — and look at the progress and the failures experienced toward becoming a more unified world …

Gahan’s people-purge is not exclusively racial, but on principle, it is the same. MLK Jr. Day should be a moment when JUSTICE is a top priority. Denounce Gahan and his expulsion plan.

I couldn’t have said it better. Can your hear us NOW, local Democrats? In closing, here’s a bit more about HUD and fair housing. How does this affect us here in NA, Gauleiter Duggins?

I mean, the ponies aren’t even running now, are they?

One Way to Fight HUD’s Heel-Dragging on Fair Housing, by Kriston Capps (CityLab)

As civil rights groups line up in opposition to a new HUD rule, a legal strategy emerges.

On Monday, protesters in Chicago jeered Ben Carson, the secretary of the U.S. Department of Housing and Urban Development. A member of a grassroots seniors organization also interrupted his speech. It was Carson’s first public appearance since he issued a delay in a key rule for advancing fair housing and confronting racial segregation, and the resistance may only be getting started …