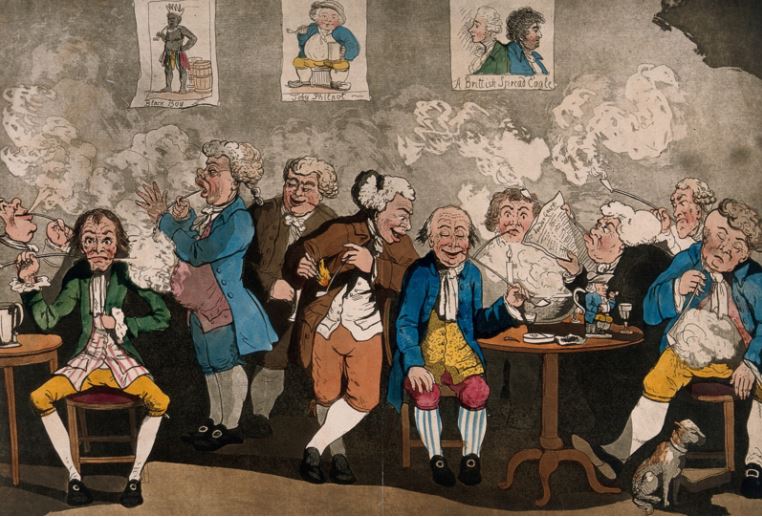 “In this climate, molly houses were an all-too-necessary place of refuge. Sometimes, these were houses, with a mixture of permanent lodgers and occasional visitors. Others were hosted in taverns. All had two things in common—they were sufficiently accessible that a stranger in the know could enter without too much hassle; and there was always plenty to drink.”

Apart from being fascinating, uplifting and horrific, this article is a mighty effective vocabulary builder. Let’s hope Shane is taking notes for a future installment of his excellent new words.

Molly houses have been scrubbed from the history books, but we can’t know where we’re going without knowing where we’ve been. It’s a constant mind-boggler as to why humans spend so much precious time persecuting each other.

Live and let live, anyone?

How the 18th-Century Gay Bar Survived and Thrived in a Deadly Environment, by Natasha Frost (Atlas Obscura)

IN 1709, THE LONDON JOURNALIST Ned Ward published an account of a group he called “the Mollies Club.” Visible through the homophobic bile (he describes the members as a “Gang of Sodomitical Wretches”) is the clear image of a social club that sounds, most of all, like a really good time. Every evening of the week, Ward wrote, at a pub he would not mention by name, a group of men came together to gossip and tell stories, probably laughing like drains as they did so, and occasionally succumbing to “the Delights of the Bottle.”

In 18th and early-19th-century Britain, a “molly” was a commonly used term for men who today might identify as gay, bisexual or queer. Sometimes, this was a slur; sometimes, a more generally used noun, likely coming from mollis, the Latin for soft or effeminate. A whole molly underworld found its home in London, with molly houses, the clubs and bars where these men congregated, scattered across the city like stars in the night sky. Their locale gives some clue to the kind of raucousness and debauchery that went on within them—one was in the shadow of Newgate prison; another in the private rooms of a tavern called the Red Lion. They might be in a brandy shop, or among the theaters of Drury Lane. But wherever they were, in these places, dozens of men would congregate to meet one another for sex or for love, and even stage performances incorporating drag, “marriage” ceremonies, and other kinds of pageantry.

It’s hard to unpick exactly where molly houses came from, or when they became a phenomenon in their own right. In documents from the prior century, there is an abundance of references to, and accounts of, gay men in London’s theaters or at court. Less overtly referenced were gay brothels, which seem harder to place than their heterosexual equivalents. (The historian Rictor Norton suggests that streets once called Cock’s Lane and Lad Lane may lend a few clues.) Before the 18th century, historians Jeffrey Merrick and Bryant Ragan argue, sodomy was like any other sin, and its proponents like any other sinners, “engaged in a particular vice, like gamblers, drunks, adulterers, and the like” …