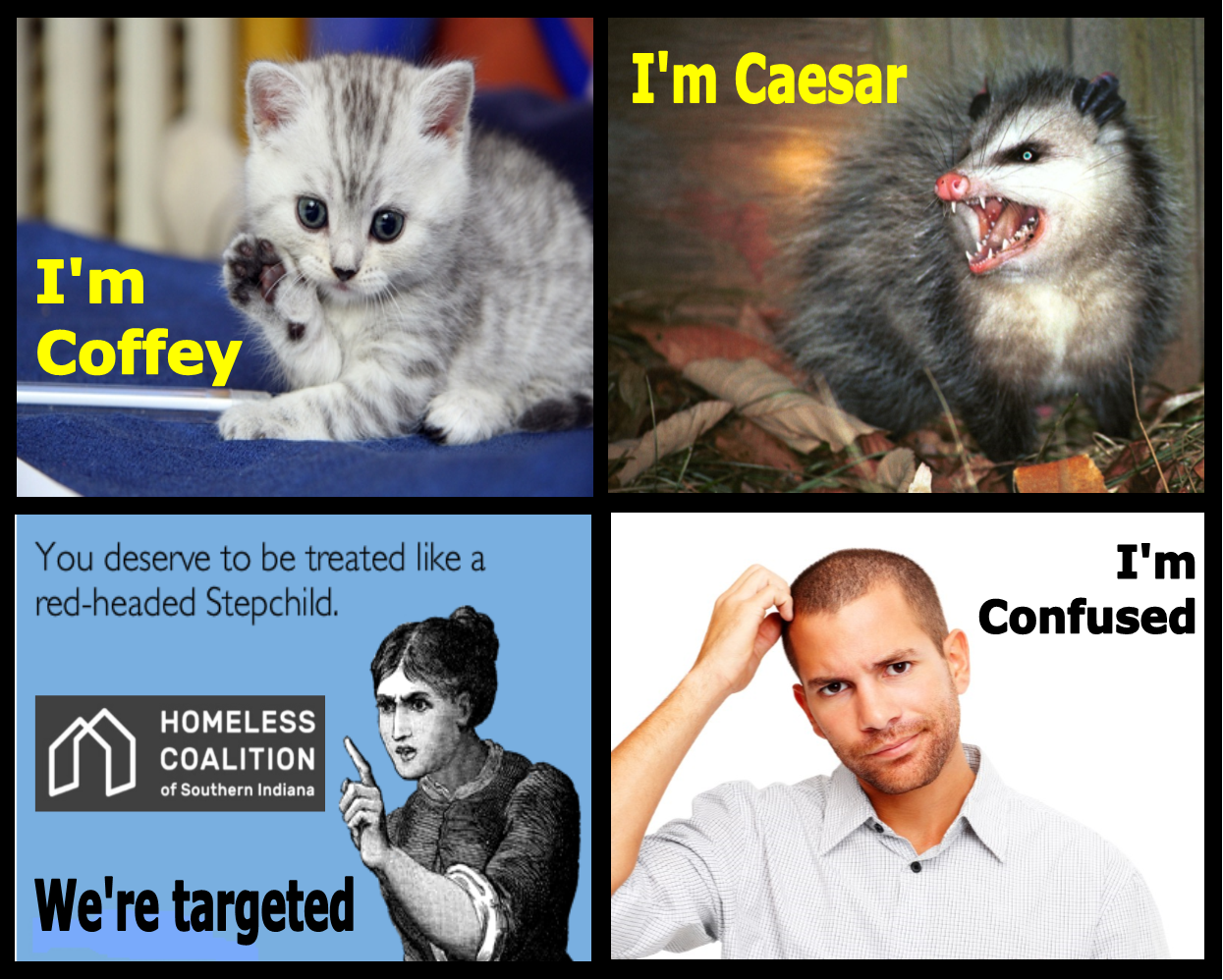 I’ve been attending city council meetings for so long, I can remember Barb Anderson’s annual appearances before the body, when she’d ask if perhaps this year our city might (a) acknowledge homelessness exists, and (b) consider absorbing just a bit of Haven House’s expense in addressing their needs in lieu of NA’s ongoing refusal to do anything itself, for its own — and the dysfunction would explode.

… Not that there weren’t full-throated, arena-sized roars last night. For outgoing at-large councilman Donnie Blevins, it was an evening of indisputably Biblical proportions. Blevins, a credentialed minister, led off what he believed would be his final meeting with a quiet New Testament prayer (a dozen or more references to “heavenly father” blessing any and all present), closed it with an impassioned Old Testament prophet’s tirade (a half dozen angry “bull craps”), and as such, played a small but significant part in the customary display of legislative dysfunction that, in the end, is the only way this council will be remembered.


Specifically, Blevins’ fire and brimstone was directed against fellow councilman Kevin Zurschmiede, who tabled R-07-45, a resolution to provide funding for Haven House, the homeless shelter in Jeffersonville. Haven House has been beset with managerial difficulties in 2007, yet remains the only local organization committed to dealing with a problem that few community members or elected officials seem willing to admit exists.


Zurschmiede explained the withdrawal as being necessitated by a “couple of phone calls” he received earlier in the afternoon. If these calls were indicative of the malice with which some in the community customarily regard Haven House’s director, Barb Anderson, then it’s likely the calls were anonymous; be that as it may, Zurschmiede summarily punted and Blevins immediately pounced on the fumble, first asking that the tabling be reconsidered, and then, much later at meeting’s end, loudly and passionately providing his view of the problem with colleagues who don’t know what it’s like to be “out on the street” at this time of year before storming out of the room, not to return.

On the first Thursday evening of 2018 we learned that yes, homelessness is a thing even if Jeff Gahan persists in disagreeing, and more amazingly, these days Haven House should receive more money than Barb comes to ask for.

None other than Dan Coffey — who was on his creepiest “good Danny” behavior all night — politely and constructively suggested upping Haven House’s tithe at the expense of the Homeless Coalition, which would see its previously promised $75,000 cut to $50K.

Bob Caesar promptly channeled his inner populist and melted down, completely and utterly embarrassing himself, launching petulant tirades in all directions, and denouncing the Homeless Coalition to everyone except the organization’s director, Keeley Stingel, who stood the lectern inviting questions, and informatively fielding them, with Caesar reverting to stone cold silence until she sat down — then off he went again.

A tad cowardly, wouldn’t you say?

Just what was the issue with Tiberius Severus Octavian Elagabalus Septimius Augustus Claudius Hadrian Gluteus Maximus Caesar– Protector of Fitting and Proper Scribnerian Values, Deliverer of all Downtown Datedness, Master of the Ex-Mercantile, and Guardian of the Gates?

Probably his unceremonious defeat in the meeting-opening election for the 2018 council presidency, an occurrence that may or may not prove auspicious in the coming year. First, let’s look back at last year’s inaugural council conclave on January 5, 2017, when the mayor’s handy squadron of envelopes easily put down an insurrection.

Dynamic Duo resumes control of New Albany city council, Boy Wonder plots next move, and the rest of us drink straight through.

I suppose someone’s got to do it, so here is coverage of Thursday evening’s city council meeting.


A rumored seismic shift in the council’s power base failed to materialize, as indie swing voters played the game the way the game is meant to be played, and extracted their minimum yearly requirement of tasty nutrients from the Dear Leader.


Accordingly, Pat McLaughlin was re-elected to the position of Council President for Life, defeating Al Knable 6 to 3, with Knable’s votes coming from GOP council block.


The vote to re-elect Greg Phipps as Vice President was 5 to 3 over David Barksdale, with Scott Blair abstaining.

However, both independents joined the three Republican members in ushering in Knable as president and Blair as vice-president, reminding us that when you’re without a political party on city council, it’s a year-to-year contract.

Blair’s motives are a mystery to season ticket holders, and we’ll believe in this coalition when we see it persevere, but ever since Coffey (at heart an unreconstructed Falangist) deserted the Democrats for unprincipled independence in the aftermath of The Donald’s enthronement, it has been at least theoretically possible for a Republican/Independent marriage of convenience to make life fairly difficult for Dear Leader.

Surely Gahan will outbid the GOP for Coffey’s services? After all, they’ve been so symbiotic for so long.

NEW ALBANY — The Homeless Coalition of Southern Indiana and Haven House in Jeffersonville both were given a financial boost at Thursday’s New Albany City Council meeting.

The council voted on third reading to give the Homeless Coalition $50,000, $25,000 less than what the organization originally asked for. Haven House also was awarded $50,000 on first and second reading, and may get a little more on Jan. 18 when the third and final reading of the ordinance is voted on. Haven House was seeking only $25,000, but council members praised the work of Director Barbara Anderson and decided to give her shelter at least a $25,000 bump.

“We all know the work she does,” Councilman Dan Coffey said. “She is proven. They need more boots on the ground right there.”

“We are the only real residential shelter of any size in 14 counties [Southern Indiana],” Anderson told the council.

“Pole Dancing at the Homeless Shelter”, and other songs of unintended mirth from the Same Song Singer.

I strolled into last evening’s council meeting just in time for the commencement of the public hearing on A-08-19, an ordinance to set salaries for elected officials.

Settling into the creaky metal chairs that we can’t afford to replace, I listened as Gonepostalman launched into pointed criticism of what sounded to me like an optional program of healthcare benefits available to local elected officials.

In the speaker’s eyes, this option amounts to a 180% raise if exercised – something positively scandalous in a country where people like the Gonepostalman customarily resist the siren’s call of universal health care like that widely enjoyed in functional countries they loath for not being as American as we are.

Of all people, it was none other than Dan Coffey who effectively lanced the boil by asking the U.S. government’s taxpayer-sponsored snail mail delivery technician to describe the history of his own pay raises and benefits, but not before Steve Price served notice that if a shameless Checkers speech was good enough for Tricky Dicky, it’s good enough for the downtrodden constituents that CM Price drives (not walks) constantly on his own gasoline dime to visit, drink Folger’s, and assure that their prospects won’t be permitted to improve on his watch.

CM Price noted that alas, he was one of the council members who had signed up for the health care bonanza, not for himself, mind you, but after friends phoned him anonymously late at night and said that some doctorin’ now and then might be good for his daughter … and now that Gonepostalman had rightly pointed out the error of his ways, a contrite Price could see that thinking about his family was selfish.

“I put her before the common good of the city of New Albany, and that was wrong,” said Price.

Instinctively, I reached for my hankie … to wipe the shit off my shoes.

As C-J reporter Dick Kaukas informs us, the council approved a $25,000 tithe to Jeffersonville’s Haven House homeless shelter, primarily as a conscience-salving means of avoiding a comprehensive consideration of New Albany’s own problem with homelessness, and yet, as Price noted during an interminable, pre-school-masterly grilling of Haven House director Barb Anderson, it isn’t that most of those homeless people really want to work, anyway, something Price gleaned from his personal experience with a deadbeat rental property resident who stiffed the councilman and fled to the shelter at his first opportunity, presumably exhausted by daily mandatory Dave Ramsey recitations.

Remarkably, the primary rationale for Price’s hectoring of Anderson was revealed to be “red flags” raised by mysterious (different) callers phoning the councilman to complain about Haven House’s management, while refusing to come on down to the council chambers and put their comments on the record, with not even a Nixonian doctored transcript as proof of their existence.

The Haven House debate continued, with Coffey forcefully upholding the need to fund help for the homeless, and suddenly the gallery gasped as Price made another shocking revelation.

Who told you THAT?

Not only would there be no overtime for firefighters and a potential City-County Building rent snafu, but all of it had come to him “ACCORDING TO THE NEWSPAPER,” not via more obvious and conventional methods like his person being seated twice monthly on a council that deliberates on such matters in spite of never receiving information that isn’t passed on to them by cub reporters and red-flag-wielding chatters.

Outgunned, and with most of his ammo actually cheap Wal-Mart blanks, Price adeptly reversed field and decided to feign some measure of concern about the homeless, extemporaneously offering his venerable, three-minute old personal plan for the city to do something positive about the problem of people who refuse to work.

(a) House them in the Tabernacle building on 4th, presumably because its engaging patio-style rooflessness would simulate natural conditions out on the street, or …

(b) House them at the Rustic Frog/II Horseshoes, since to do so would be an improvement on the go-go dancers there now, and with an added benefit of the homeless being housed out of view by the floodplain, where they would be invisible to taxpaying citizens disturbed by their shiftlessness.

Perhaps the owners of the property will give it to the city.

Believe it or not, but it wasn’t over yet.
Having approved the Haven House funding resolution by a count of 8-1 (guess who), and with little further debate in the offing on the first reading of the salary ordinance, the increasingly apocalyptic (not to mention apoplectic) Price threw a final gem of observation into the recessionary gloom pervading the vicinity of Dewey Heights.

How bad is it, Steve?

Well, it’s so bad that the uncouncilman personally knows of people who’ve been forced to dispense with cable television to make ends meet.

The soiled hankie was of no further use, so I buried my head in my raggedy sweatshirt. The humanity … the humanity … hmm …

Wonder if they’ve got cable over at Haven House?