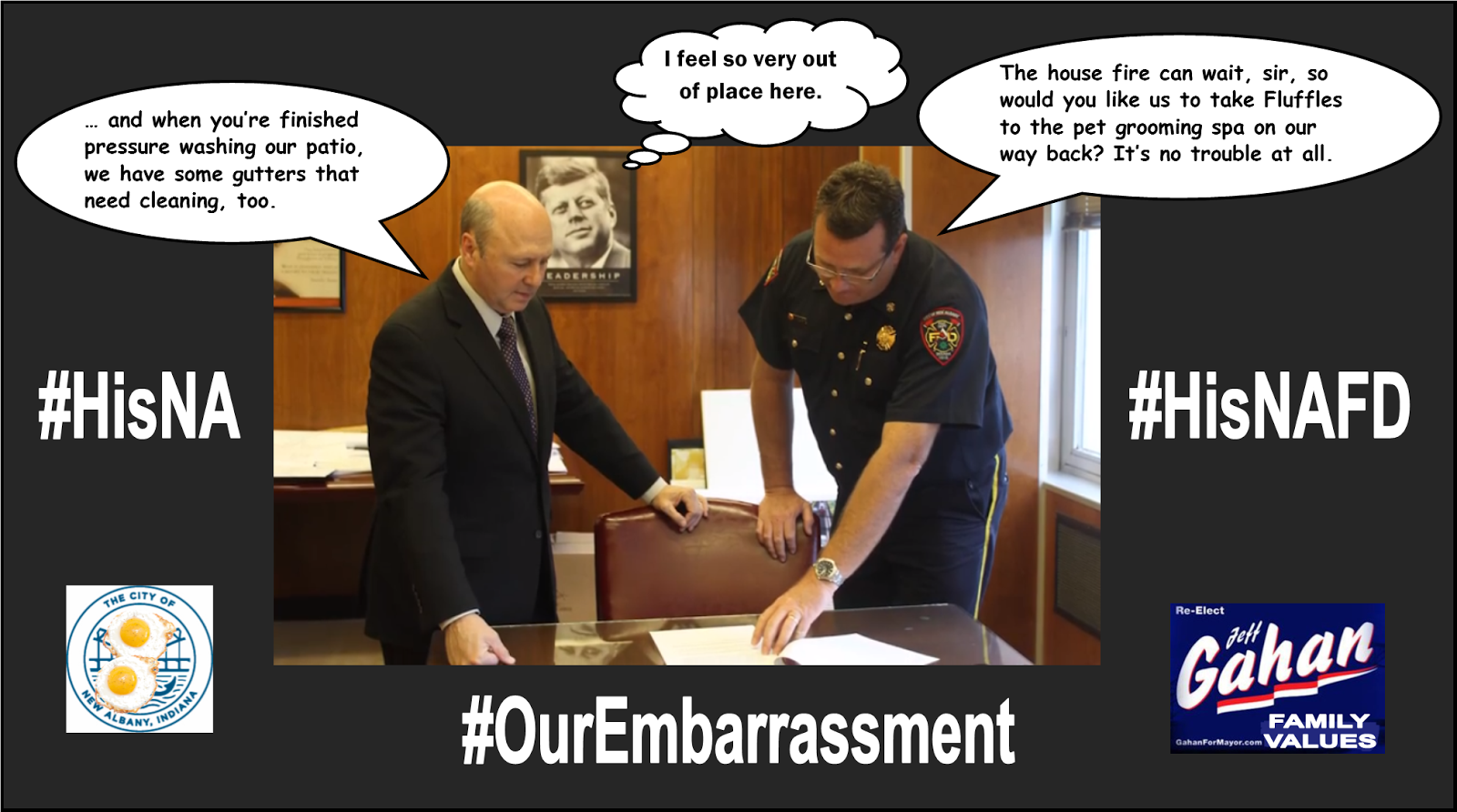 Hundreds of you are reading, and we believe this attests to a keen ongoing interest in grassroots New Albany stories, perhaps because they’re being chronically under-served elsewhere.

After all, fawning stenography and inexorably multiplying religion columnists can get one only so far.

To suggest that NAC’s December numbers stayed strong would be a understatement. First to last, it was our best month ever. Beginning with this post on December 16 …

… NAC’s page view numbers surged in an unprecedented roll, the likes of which never have been witnessed here. At Facebook, there was an accompanying spike in likes. It is humbling, and we’re appreciative.

The December list begins with ten “honorable mention” posts, before concluding with the Top Ten, escalating to No. 1. Stats are derived from Google’s internal numbers listings.

C’mon, DNA: The time has come. A fact’s a fact. Taco Walk belongs to her. Why not give it back?

There is a simple way to resolve the situation.

Let’s borrow LEO’s “Thorns and Roses” idea and apply it to the News and Tribune.

If you’re a regular reader of NA Confidential, you know the absentee Courier-Journal seldom so much as enters into the blog discussion these days, but when we consider the CNHI newspaper in Jeffersonville — well, to borrow LEO’s description, it’s something we love to hate and hate to love.

LIVE TO EAT: Hull & High Water’s lunch hours debut on December 11, and other tidbits from the New Albany food and dining scene.

Hull & High Water has been playfully hinting at new lunchtime hours, and now it’s official … as of December 11. That’s next Monday, folks.

The NewAlbanist: Tonight, we seek to speak truth to power, insisting that no public housing should be demolished unless and until viable alternatives are made available to public housing residents.

“The problem with speaking truth to power comes when power has no respect for truth, public sentiment, or open government. There is a non-zero chance that we will be confronted by the power tonight regardless of our Constitutional rights to peacably assemble and to petition for the redress of grievances. We demonstrate tonight on public property, without trespass, in exercise of those rights and will not impede the rights of any other. Nonetheless, we live in an America and a New Albany where the exercise of rights is not sacrosanct. We live in a city where vindictive retaliation is the norm and where there is little hesitation to deploy police powers to intimidate and do injury.”

Hilariously, all David “Brownie, You’re Doing a Heckuva Job” Duggins can do is spout bilge about “politically motivated” protests and outside conspiracies. As we noted yesterday, paranoia is on the rise within the ranks of Team Gahan — and where are all the Democrats?

A shout out to LT for reminding me about misandry, which I don’t recall seeing mentioned in the “Collected Spasms of Herr Trump,” although misogyny is another story. Predictably, a book already has been written about all three of Shane’s words for today: Misogyny, Misandry, and Misanthropy. It’s a collection of essays published in 1989 by the University of California Press.

ON THE AVENUES: My Franz Ferdinand heritage trail, 30 years ago in Sarajevo.

On Tuesday morning, my Franz Ferdinand obsession took root, and I embarked on a self-guided walking tour of those parts of Sarajevo’s core that prominently figured into the fateful day in 1914 when the Habsburg heir and his wife were killed. The following, originally written as part of my 1985 beer blog travelogue about Vienna, hasn’t been published at NAC previously.

Unsurprisingly, the ongoing saga of Matthew Landan and his Haymarket Whiskey Bar seems to be settling into the familiar pattern of trench warfare within the legal system.

A farewell to wonderful Haarlem on Saturday, September 23.

The last full day in Europe always seems bittersweet, even after three dozen goodbyes. My body returns to the daily grind, but something of my spirit remains behind, to be reclaimed next time.

New cases in the case of Haymarket Whiskey Bar.

Haymarket Whiskey Bar’s listing at the Urban Bourbon Trail has been restored (scroll down at the site to see it), and these two links tell the story of recent legal salvos.

THE BEER BEAT: The Bechdel Test, and what 1980s lesbians can teach us about beer.

It’s best just to read what Emma Inch has to say about what 1980s lesbians can teach us about beer, with a minimum of commentary on my part, but a brief diversion to signpost the Bechdel Test.

30 years ago today (May, 1987): Five days in Skopje with the greatest seismologist of them all.

And so it transpired that Rady opened his apartment to a complete stranger from America, exhausting his limited English, awarding me his couch for sleeping, showcasing the local sights during the scant free time he had, putting me on a round-trip bus to Lake Ohrid for a day trip, and finally driving me back to the bus depot stupidly early in the morning when it came time for my getaway to Bulgaria.

This strange holiday digression begins with a social media group devoted to jazz legend Leon Bismark “Bix” Beiderbecke, where this little known Christmas song from 1945 by Hoagy Carmichael was posted: “My Christmas Song For You,” with vocals by Martha Mears.

This story ends with a view of outdoor space that few folks in this town have seen for many decades, but it begins with this tale of coworking space.

From 2015, “Fairytale of New Albania” … including my favorite Christmas story.

But you see, as an unbeliever, I simply cannot indulge the Christian aspect of the day as it pertains to my sphere of individual conscience. For the same reason, I cannot support Christian displays in the sphere of public property. There is secular rule of law in America, and it reaffirms and protects an individual’s religious or non-religious conscience, whether it speaks to no gods or many. Without this fine line, Mike Pence really will try to tell me which church to attend – or else.

Reacting to We Are New Albany’s candlelight vigil, Deaf Gahan is confused and stunned like a duck hit on the head.

Let’s help our enfeebled and agoraphobic Dear Leader: Having defeated a series of weak, throwaway Democratic candidates, Clere has been in Indianapolis, serving as state representative, a position Deaf Gahan won’t ever experience in his life … especially after this weird, ongoing, small pond student council sociopath’s jihad against New Albany most vulnerable residents.

And yet Deaf Gahan remains ensconced within his Disney-fried fantasy bunker, writing mash notes to heroes like John F. Kennedy and Nicolae Ceausescu, both of whom, if reincarnated, would flick the Deafster aside like an annoying insect, asking: who’s that fanboy poseur over there?

Team Gahan swears its engineering contractor will listen to your comments about the Mt. Tabor deforestation project at the mere formality on January 2.

Five whole days later, the News and Tribune somehow meandered around to the story, including an half-assertion this meeting will be different; this time around, there’ll be some down-home, old-school listening going on. Uh huh. Does anyone have a grain of salt the size of size of Jeff Gahan’s ego?

The Floyd County Democratic Party is terminally ill. That’s why its members are praising Gahan’s Goons and the ongoing attack on the city’s vulnerable public housing residents.

Actions like these make Gahan’s clique profoundly untrustworthy — and precisely the sort of lawless element we should actively resist, not condone. Local Democrats say they’re part of the solution. Reality on the ground is markedly different.

Comments on the pre-determined Mt. Tabor deforestation and auto enrichment outcome can be given on Jan. 2 at 7:00 p.m. at Our Lady of Perpetual Help Catholic Church (1752 Scheller Lane).

The Green Mouse received a message.

It looks like the city is posting the notice for the Mt. Tabor project today – they are trying to skirt open public comments again. They are also cutting out half of the project citing money issues. Maybe if they would leave the intersection alone, they could do their sidewalks all the way.

Indeed. I don’t suppose any of this will prevent the deforestation slated to begin the following day.

DNA’s and the newspaper’s masks … or, thoughts occasioned by an excellent essay called “Meet the man who hides behind a mask.”

As an interesting side note to all this frantic circling of wagons, both here and in Jeffersonville, it helps to know that a member of the community first conceived of the Taco Walk idea and brought it to DNA with the best of intentions, imagining that by doing so, the community would benefit.

At 11:00 p.m. on a recent evening, four firefighters (Engine 3) were awakened and sent to the vicinity of the YMCA, where Mayor Jeff Gahan already was on the scene, taking control of the situation.

Gahan promptly asked the firefighters to change a flat tire on a vehicle owned by friends of his.

Eric Morris talks about his plans for Gospel Bird in the New Year.