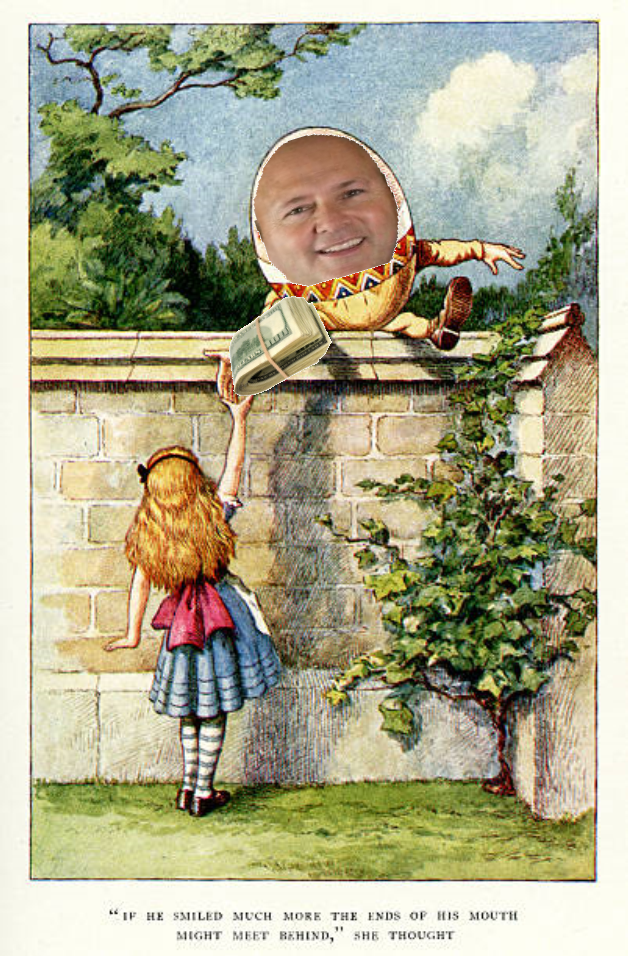 The walls of the Down Low Bunker must have been all aquiver. I wouldn’t want to the the Domino’s delivery man or the meter reader in times like this.

How can there be two mayors so close together, neither of whom without a single mistake in six years?

Jeffersonville’s Moore looks back on 2017, ahead to more growth, by Aprile Rickert (Obviously Jeffersonville Gazette)

JEFFERSONVILLE — In the past year, Jeffersonville has seen the start of new retail growth, housing opportunities and major infrastructure improvements that Mayor Mike Moore say will carry the city into a brighter future for decades to come … “If you sat down and tried to create a perfect scenario for a community to grow and prosper, Jeffersonville is the perfect example of it.”

The Green Mouse says he received this rebuttal scrawled on the back of a discarded promise to public housing residents, then stuffed into one of David Duggins’ old piggie banks.

Humpty Dumpty smiled contemptuously. “Of course you don’t—till I tell you. I meant ‘there’s a nice knock-down argument for you!’ ”

“When I use a word,” Humpty Dumpty said, in rather a scornful tone, “it means just what I choose it to mean—neither more nor less.”

“The question is,” said Alice, “whether you can make words mean so many different things.”

“The question is,” said Humpty Dumpty, “which is to be master—that’s all.”

Alice was too much puzzled to say anything, so after a minute Humpty Dumpty began again.

“They’ve a temper, some of them—particularly verbs, they’re the proudest—adjectives you can do anything with, but not verbs—however, I can manage the whole lot! Impenetrability! That’s what I say!”

On second thought, this doesn’t sound at all like Jeff Gahan. Too much wordplay for a C-minus student, but boy, that Mike Hall’s getting cleverer and cleverer, isn’t he?