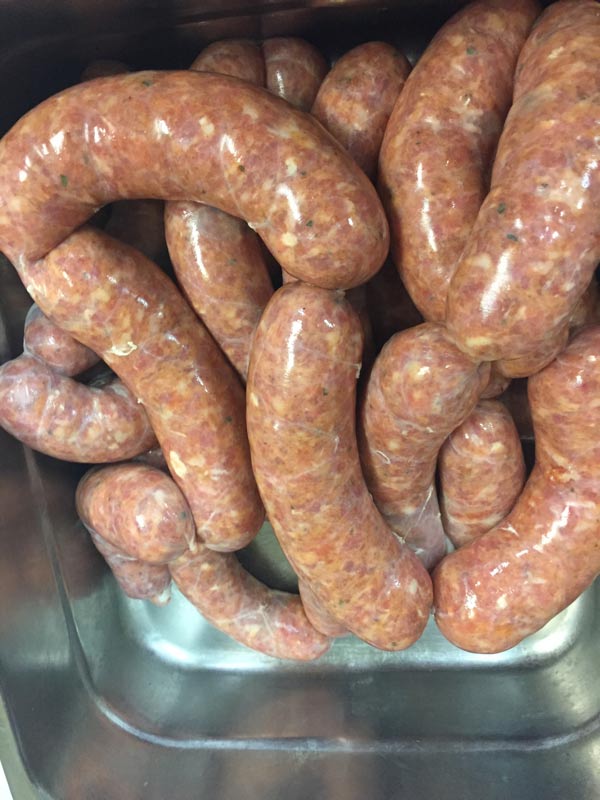 Yesterday the countdown began at number 70.

Number one wasn’t a surprise to me. Stories about local food and drink invariably perform well, and thanks to a bit of insider assistance, NA Confidential got to this one ahead of local media.

I love it when this happens. The more they ignore me, the closer I get. Now, take it away, Don Pardo.

In Vol. 21, we asked questions about the soon-to-be-repaved intersection at Spring and 10th Street, and the disappearing “No Trucks” sign at the intersection of Spring and Vincennes. Afterward, city engineer Larry Summers swooped into a discussion at the New Albany Indiana page at Facebook and gave these answers.

On Monday, there’ll be a minutely choreographed meeting of the New Albany Housing Authority’s board, which Mayor Jeff Gahan merrily neglected and starved before packing it like tinned sardines with craven bootlickers, all the better that they might huddle in the nether reaches of the Down Low Bunker, concocting the essentials of a socially-engineered property takeover designed to address poverty by attacking the impoverished — and if valuable land cleared of poor people might then be devoted to luxury-based campaign finance enhancement, well, that’s just a happy coincidence, isn’t it?

ON THE AVENUES: A downtown business owner’s open letter to Harvest Homecoming.

These aren’t new issues, these aren’t new complaints. At what point will the Harvest Homecoming committee and the city finally make adjustments for the betterment of the whole community, not just those who enjoy the festival?

With all due respect to the history of Harvest Homecoming and my assumption of good intentions on the part of the committee, I simply cannot support an event that shows such blatant disregard and disrespect for the year-round businesses that lose money year after year.

Something’s happening at 129 W. Market, where Wolf Supermarket used to be, and we know one of the principals.

Recently there have been signs of construction activity at 129 W. Market Street, which old-timers know as the former Wolf Supermarket (closed circa 1993; Gary Wolf died in 2011).

From the folks who brought you Exchange and Brookyn, Longboard’s Taco & Tiki is coming to downtown New Albany in 2018.

“The Southern Indiana dining scene continues to see growth as proprietors Ian and Nikki Hall, owners of The Exchange Pub + Kitchen and Brooklyn and the Butcher, announce their latest project, Longboard’s Taco & Tiki. Described by Ian Hall as what would be considered a hybrid of fast casual dining, Longboard’s Taco & Tiki looks to deliver flavorful chef-inspired tacos, tiki-influenced cocktails, in a relaxing, cool, California beach vibe.”

Grid Control, Vol. 13: “Dear Deaf Gahan and minions: FOR THE LOVE OF PETE, STOP TRYING TO BE COOL AND DESIGNER-ISH. YOU’RE NOT, AND IT’S EMBARRASSING ALL OF US.”

Since Cool Papa G’s and his wagon-knitting-circle at City Hall feel threatened by creativity, we’re compelled to go guerrilla for shits and giggles, so let’s take a glance at a few hilarious (and purely accurate) reactions to this morning’s post:

Spring Street stage block: “It’s like buying a new car and then putting it in the garage and driving a rental to work.”

By chance, did anyone notice that Friday on Spring Street the city closed the single eastbound lane for a stage? I want to say we have a nice big stage somewhere already — it’s yellow?

Yes, sir. That’d be the Bicentennial Concert Series blocking a traffic lane, and the Riverfront Amphitheater three blocks away, perched by the Ohio.

The pace of buildout has increased at Hull & Highwater, and soon it will be July.

These photos harvested from Facebook capture recent progress toward completion of the Hull & Highwater buildout. The most recent photo is at the top, and the oldest (April) placed last. It’s yet another Resch Construction project. When does he sleep?

This time nothing bad happened, but who are you going to believe — City Hall or your own two eyes?

City Hall describes the four major projects to be funded (in part?) through the Horseshoe Foundation’s $5 million gift.

Earlier, we had video from today’s ceremony. There’ll be time for further discussion. Until then, following is the city’s press release — Team Gahan’s own words and illustrations, offered without comment.

It’s been roughly six weeks since NAC broke the errant cross hatching story. At the most recent BoW meeting, city engineer Larry Summers said he expected repairs to occur before the debut of two-way traffic, and that doing so would not require the westbound lane of Spring Street to be closed. At any rate, the work was underway before the end of the week, beginning at 4th Street and moving east. 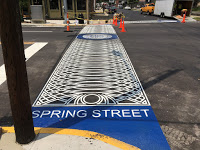 Always identical logoed designs where mandated by engineers, not anything to be confused with grassroots creativity. Always the Mark of Duggins. Can the NAHA anchor logo be far behind?

I ran into Matt McMahan yesterday at the post office, and later he sent these photos of District 22 Pizzeria, his new project, located next to Big Four Burgers + Beer NA.

At 11:00 p.m. on a recent evening, four firefighters (Engine 3) were awakened and sent to the vicinity of the YMCA, where Mayor Jeff Gahan already was on the scene, taking control of the situation. Gahan promptly asked the firefighters to change a flat tire on a vehicle owned by friends of his.

Thanks for reading NA Confidential, where we enjoy burrowing beneath the boilerplate headlines to offer unique local perspectives. These June numbers testify to a keen interest in New Albany stories, perhaps because they’re being chronically under-served elsewhere.

Irony alert: Many of us feel that the city of New Albany definitely is at fault concerning the beautification-oriented redesign of East Main Street … just not in the exact way alleged by the plaintiffs in a plainly frivolous lawsuit. First, some background from the fall of 2015.

Here’s one for Wendy: “How Corporate Welfare Is Killing Small Businesses.”

BREAKING: Bob Lane has been fired by Jeff Gahan’s stacked and packed NAHA public housing board. 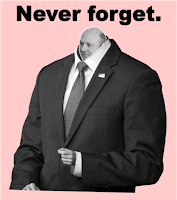 Mt. Tabor Road euphemism project: If City Hall looks bad, that’s only because it’s doing the damage to itself.

Colin Receveur is to be commended for pursuing every legal mechanism in an effort to compel Team Gahan to practice transparency. It isn’t just that those federal 80/20 construction grants are like crack. It’s that to Team Gahan, openness is like Ebola. 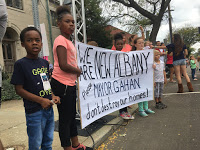 Very seldom apart from eye-rolling satire (our default coping mechanism in New Gahania) can it be said that New Albany’s ever somnolent Harvest Homecoming parade actually boasted a highlight, but yesterday was the gratifying exception that proves the rule. In short, His Excellency had an impromptu Ceausescu moment while soaking up the adoration of the gathered throngs.

These handy visuals illustrate “The Ripple Effect When You Shop Local.”

Before … the Google street view (220 State Street) from December, 2016. After the crappy facade was removed, a pristine sign was revealed.

Following is a press release, courtesy of local businessman Colin Receveur. Municipal corporate counsel Shane Gibson’s cavalier disregard for public information requests is legendary. I’m delighted to him snared in arrogance of his own making. But just remember that taking metaphorical bullets for the mayor is why Gibson gets the big money — the really, really big money. Jeff Gahan’s the one who should be answering for this, isn’t he?

Talkative and friendly, probably the only harm Brack ever did was to himself, and he’s certainly not alone in this regard. He had issues, many self-inflicted. So do the rest of us. It isn’t something I often say, though surely merited in this instance: I’m happy he’s at peace, as I suspect it often was elusive in life.

Eric Morris talks about his plans for Gospel Bird in the New Year.

“Just to make it a little more clear, we want to stay competitive and cutting edge in an industry that is becoming over-saturated. We feel like the way to do that is to serve people food that we feel very passionate about, with no limitations. Some of it will be adventurous, and some you will recognize, but by trimming down our menu it allows us to focus more on each dish, from where it came from to how it is prepared.”

Keeping it short and sweet: The Urban Bread Co. location at 145 East Main Street has officially closed, according to Jeff Mouttet, owner of the adjacent Match Cigar Bar.

The obituary and visitation arrangements for Bettye Sue Baylor (1932 – 2017). 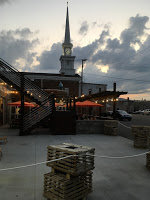 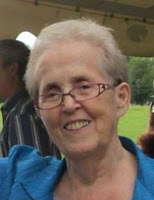 Diana and I are saddened to report my mother’s passing. Sue Baylor died this afternoon at around 4 p.m.

It looks like the demolition of the old Tommy Lancaster’s on Market is underway. Presumably, Gahanesque luxury is on the horizon.

Only the functionaries deep within the shadowy bowels of the Redevelopment Commission know for sure, but they’re not talking, and it appears the building formerly housing the Tommy Lancaster restaurant is being gutted in preparation for whatever TIF-laden grandiosity is to come.

“I believe that effective art is more about process than project” is a statement we don’t often hear around here.

Pay close attention to the street piano scenario described below (ASK THE BORED: In 2015, the New Albany Street Piano was utterly perplexing Team Gahan’s artistic sensibility), and never forget the lessons we learned from ours. Are those dogs still playing poker?

Top Ten posts at NA Confidential for May, 2017.

Thanks for reading NA Confidential, where we enjoy burrowing beneath the boilerplate headlines to offer unique local perspectives.

In a disgusting sign of the times, white supremacists have landed in New Albany. 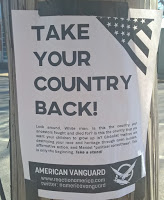 It’s a group briefly referenced in this Southern Poverty Law Center post. Our friend Brandon Smith saw the sheet today on Spring between 3rd and 4th and photographed it. The image appears here with his permission.

Matt Nash to purchase Karem’s Meats, which will relocate to Plaza Drive (off Grant Line Road) on or about May 1.

Congratulations to Karem’s. I can think of no better way to end this accounting of the year’s top stories than direct your attention to this song from Keith Moon’s only solo album in 1975. Ringo Starr is at the megaphone in “Solid Gold.”