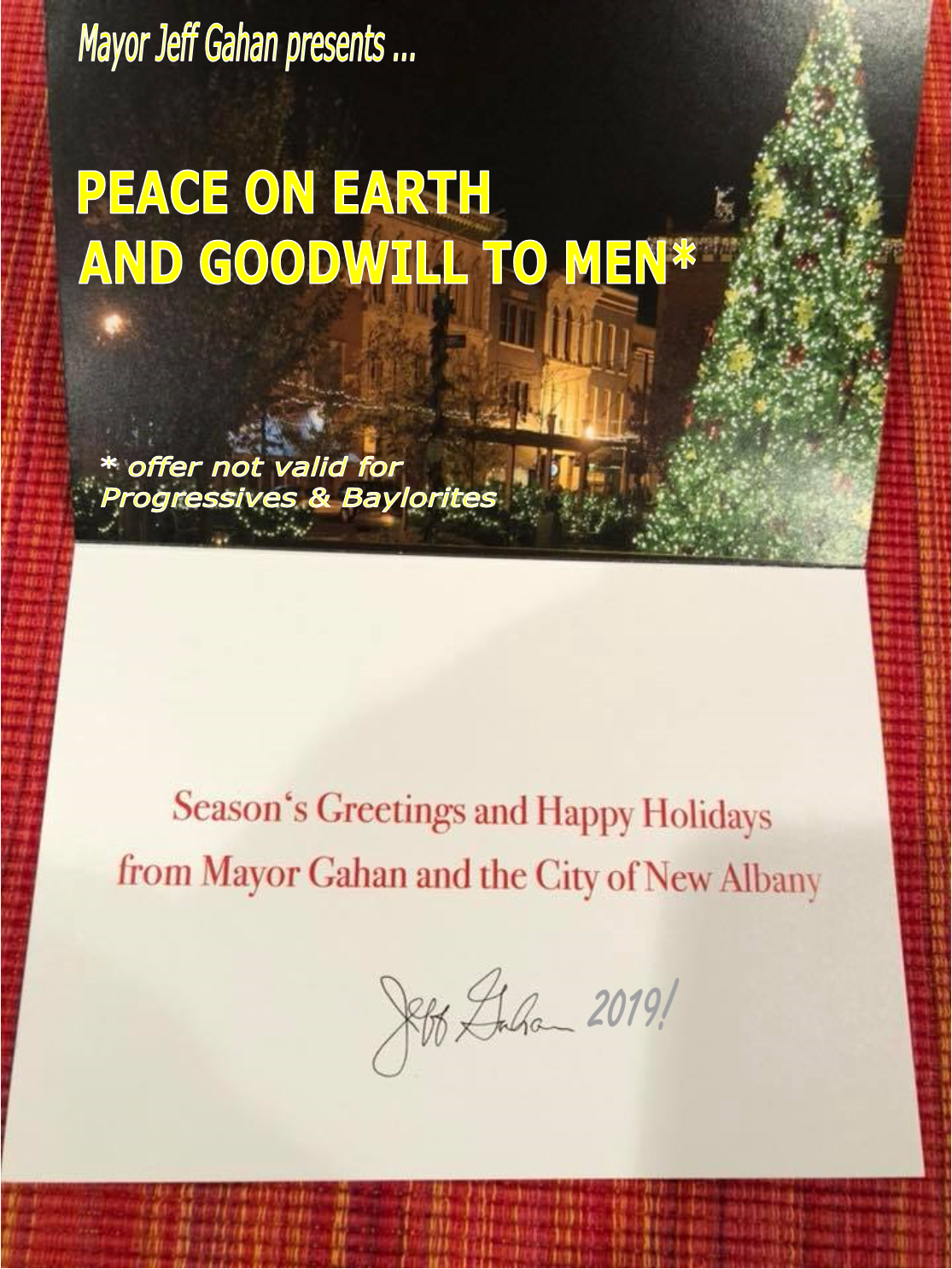 ON THE AVENUES: Fairytale of New Albania (2015 mashup).

I had intended to take the day off from the rigors of column composition, but with such a beautiful spring day outside in the aftermath of flash floods and tornadoes on December 23 — Festivus, no less — why not huddle indoors a bit longer on Christmas Eve, and plagiarize a previous effort?

After all, there is a legitimately important news item to report.

First, there is you. As a regular reader, you already know that I publish my ON THE AVENUES column on Thursday, a slot inherited from the pre-merger Tribune.

However, you may not be aware of your curious non-existence as a regular reader. Upon closer examination, it seems the page views and hit counts recorded here are entirely figments of my imagination, and the curiously timed denunciations and rebuttals emanating from purportedly non-reading public officials and functionaries merely an Orwellian coincidence.

There is no dissent in the Hermetic Dixiecratic Disney Republic(an) of New Albany, where the referendum of support for Mayor Jeff Gahan Presents the Doggie Doo Doo Fun Park and Canine Water Slide passed muster with 98.6% tally in favor, but disclaimers aside, I am informed that tomorrow is a religious holiday of some vague sort – a forever confusing proposition for an atheist like me – so I’ll try and keep it short.

“In spite of Indiana’s flagrantly fascistic proclivities, substantial progress has been made in freeing innocent tipplers from the oppressive yoke of the preacher man’s hellfire and damnation, and yet we retain at least one world-class example of prohibitionist backwash.

“It remains illegal to sell any alcoholic beverages on Christmas Day, a ban that violates church-state separation so openly and brazenly that I’m surprised the ACLU hasn’t parachuted into Indianapolis to help save us from ourselves.”

See what I did there? That’s right: The law finally changed in 2015.

It’s about time, isn’t it? Maybe the Freedom from Religion Foundation intervened. After all, the prohibition of alcohol sales on Christmas Day was a blatant imposition of selective religious blue law on what should be secular tippling.

Indiana may be a basket case, but at least this one’s finally right.

The Indiana Alcohol and Tobacco Commission (ATC) announced today you can buy alcohol on Christmas.

Although many businesses are closed on Christmas, restaurants, bars, liquor stores and grocery stores that are open will be allowed to sell alcohol to you.

I’m told that Kansai Japanese Steakhouse in Clarksville will be open on Christmas Day, is cognizant of the change (many probably aren’t), and will be serving adult beverages. Surely Horseshoe Casino will be, as well. Anyone else? Let me know, and I’ll spread the word on social media.

(Let’s assume that by now, two years down the road, everyone knows the drill.)

Often I’m asked: Roger, why not relent and embrace the Christmas spirit?

Would it be so hard to be human, just for once?

Contrary to popular perception, I do relent – after a fashion – and in spite of my best efforts, Vulcan-caliber logic continues to elude me. It is enjoyable to have a (relatively) work-free day, to spend time with loved ones, to plan parties, to eat and drink, and to do what anyone else does on a holiday.

But you see, as an unbeliever, I simply cannot indulge the Christian aspect of the day as it pertains to my sphere of individual conscience. For the same reason, I cannot support Christian displays in the sphere of public property. There is secular rule of law in America, and it reaffirms and protects an individual’s religious or non-religious conscience, whether it speaks to no gods or many.

Without this fine line, Mike Pence really will try to tell me which church to attend – or else.

At Christmas time, I respect the wants and needs of the genuinely devout, for whom the day is an expression of deeply held belief. More grudgingly, I acknowledge with deep groans the annual recitation by Ayn Rand fetishists of a belief in hyper-consumerism and pervasive materialism as a capitalistic manifestation of self, one worth glorifying in priestly fashion.

Maybe, but only up to a point. Rolling Stone’s Matt Taibbi has contributed a thoughtful essay linking consumer Christmas to the stoking of irrational fears: This Christmas, Tune It All Out.

As for the rest of that shopaholic, mall-rushing craziness that can make this holiday so stressful, it turns out that it’s optional. Switch off the wi-fi for a few days, turn off the TV, and it’s amazing how much more reasonable the world instantly seems.

In the main, just know that you can count me out. Perhaps religion remains the preferred opiate because too much of the profit from consumerism remains in the hands of the 1 per cent.

In fact, I do have a favorite Christmas story.

My sole “corporate” day job lasted from 1988 to 1989, with a solitary Christmas in between. So it was that in 1988, management at our office in downtown Louisville declared a contest for best work station decoration.

With entirely uncharacteristic zeal, my friend and co-worker Jeff Price, who was well-connected within local radical leftist circles and later would meet me in East Germany to take part in the “summer of ‘89” volunteer student brigade, went to work toward his stated goal of winning first prize.

He soon appeared with scissors, glue, armloads of construction paper and dusty old copies of the English-language edition of the “New Albania” propaganda magazine, as borrowed from a socialist workers group somewhere in town.

Who even knew Louisville had such an organization?

Come the day of judgment, Jeff had transformed his pod into a veritable showplace of dully-colored agitprop, with a few bright red placards bearing impenetrable phrases in the Albanian language, photocopies of stiffly posed Communist leaders like Enver Hoxha and Ramiz Alia, and a genuinely demented final touch, which I’ll never forget.

Jeff’s display was dubbed Christmas in Albania – at the time, the world’s only officially atheist state – and while the judges could not quite bring themselves to give him the top prize, second place was decreed his, from sheer perverse creativity alone.

The very best Christmases are the ones that come and go with nary a trace, but this tiding truly is special. Clay pot catfish and beer?

In the absence of Slovak carp, it’ll have to do.

(Addendum: My friend Peter Dedina evidently is visiting his hometown of Košice, Slovakia, and posted this photo of yuletide carp.) 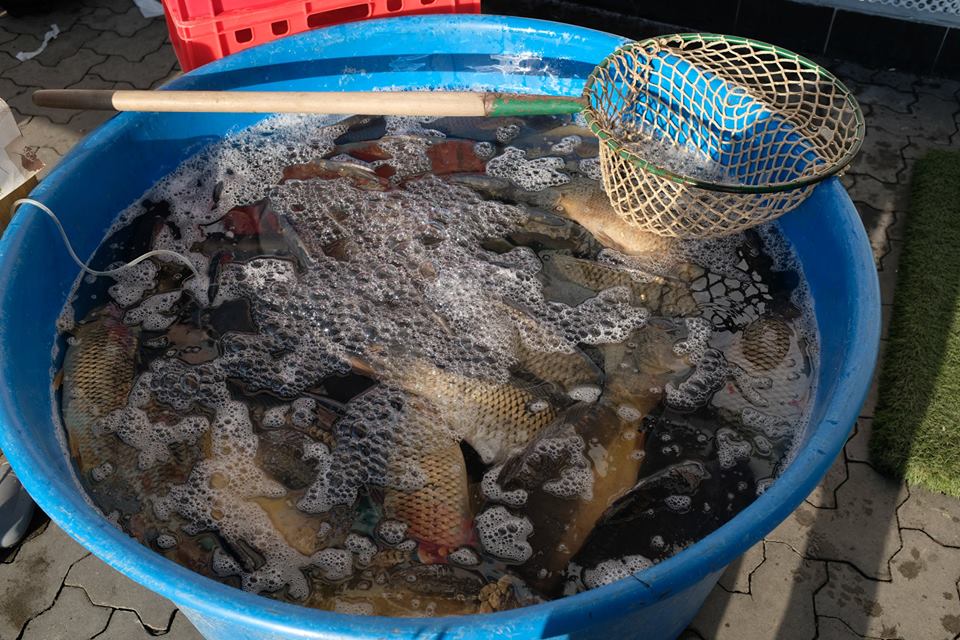