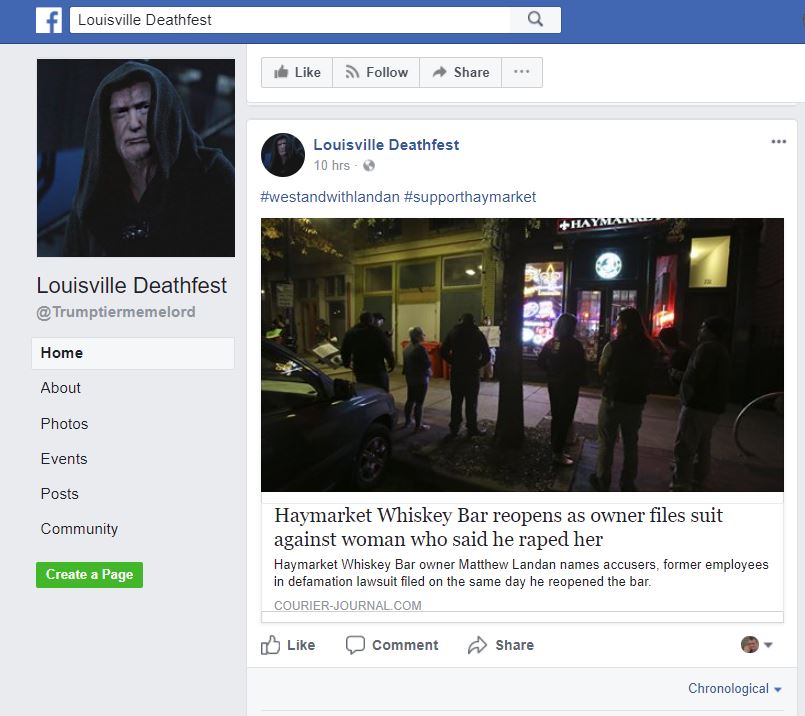 This is an interesting juxtaposition.

Much to the chagrin of neck-beard and MRA enthusiasts, the #MeToo movement marks a moment when enough is enough, and women and men are coming forward with their stories of being sexually harassed. Statistically speaking, it was no surprise, then, when allegations arose locally on social media, this time leveled against the owner of a popular bar. The accused has denied the allegations and filed a lawsuit against the women, claiming they defamed him. So it was a light in the darkness when the Craig Henry law firm tweeted out its offer to provide free legal aid. Now, that’s magical. — Syd Bishop

Now, for a more detailed examination of the legal landscape.

The cultural movement inspired by #metoo has dominated national discussion in recent weeks — with people worldwide taking to social media to share stories of sexual assault and harassment.

And in Louisville and elsewhere, the effort intended to empower and enlighten is also becoming a tool for justice.

Women and men have taken the hashtag a step farther by naming their alleged abusers online — a move that, in some cases, has resulted in instant ramifications against those accused.

Advocates say the quick response can be gratifying for assault survivors who’ve felt let down by the court system. But they warn that the posts can also open the accusers to devastating legal risks.

“Too many people post on social media thinking that they’re bulletproof,” said Colby Bruno of the Victim Rights Law Center in Massachusetts. “I would never, ever, ever counsel someone to go on social media without really thinking it through.”

Bruno has spent more than 10 years providing free legal work to survivors, and she said she’s recently seen a rise in defamation lawsuits filed against people who’ve publicly accused others of sexual violence …

We’re not exempt, so NAC’s New Albany “Person of the Year” for 2017 is #MeToo — the NA silence breakers.