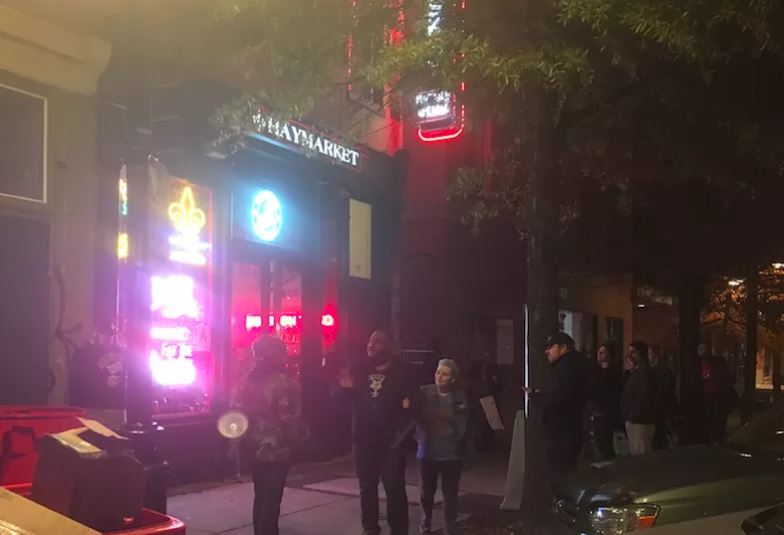 Unsurprisingly, the ongoing saga of Matthew Landan and his Haymarket Whiskey Bar seems to be settling into the familiar pattern of trench warfare within the legal system.

“When internet justice is likely the only justice”: Allegations of rape against Matthew Landan result in the closing of Haymarket Whiskey Bar. Are we learning yet?

“I’ve always considered myself to be something of a liar.”

That quote, from Haymarket Whiskey Bar owner Matthew Landan, appears at the top of a response filed by former employees Landan sued after he was accused of rape on Facebook and his NuLu bar temporarily closed.

Landan said this in a dissertation at the University of Louisville in 2014, according to the workers’ counterclaim and motion to dismiss filed Thursday in Jefferson Circuit Court.

Their filing raises Landan’s credibility as an important issue. And the motion to dismiss alleges the true purpose of Landan’s lawsuit is “vengeance and suppression” of those who choose not to work with him or talk about the alleged sexual assaults …

The masters thesis is an interesting twist, although it might be noted that a creative writing syllabus doesn’t necessarily support an obligation to pass along concrete truth.

As part of the motion to dismiss, attorney Jeremiah Reece, points out that Landan’s master thesis indicates he is a liar.

“It makes sense that there is a lie bundled into the name of my bar,” the motion quotes. “I have always considered myself to be something of a liar and once even went so far as embarking on a career in public relations (another way of saying I was paid to lie).”

As you might imagine, Landan’s seemingly autobiographical thesis has been downloaded very often as of late. Here is an expanded excerpt, from which the WDRB quotes were extracted.

Then there’s me, me and the Haymarket—my attempt to prove that not all work is work, that commerce in whiskey is actually fun. That whiskey is actually a wish key. The ticket to making my dream’s come true. My dreams of course are fairly simple. I don’t want to work for anyone but myself. I want to some day live on an island and go scuba diving five days a week while money from the bar is deposited into my account. I want to be paid for my charisma and good looks and the fact that once upon a time I put in the hard work and took the thumps and knocks, that I paid my dues and now I can enjoy the rewards of my creation.


Yet like the historic Louisville Haymarket, our name is a bit of a lie. We do not sell hay in any quantity at the bar. It makes sense that there is a lie bundled into the name of my bar. I have always considered myself to be something of a liar and once even went so far as embarking on a career in public relations (another way of saying I was paid to lie).


Owning a bar is a profitable way to make one’s living, but it has drawbacks (alcoholic tendencies). I used to own a coffee shop, but this is more exciting and allows me to work fewer hours a day and fewer days a week. In fact I rarely even bartend any longer. Mostly these days I work at playing the host. By and large it is a pleasant way to kill time while on planet Earth. It is rarely boring and there is always someone new walking through my door. In the two and a half years I have owned the bar it has earned a reputation for being one of the preeminent bourbon and whiskey bars in the city and the nation. We (the royal “we”; a way to refer to myself as well as the bar as a unit that is larger than myself) have played host to master distillers from the majority of the major bourbon distilleries. From Julian Van Winkle of the Old Rip Van Winkle Distillery to Jim Rutlidge of Four Roses we have poured drinks for nearly all the major payers in the Kentucky bourbon industry. Haymarket have been lauded in the national and local press. I have served drinks to the mayor, to the bums, to millionaires, the guys building the new bridge over the Ohio River. The Haymarket is home to everyone while they are within its friendly confines. This fills me with both a sense of accomplishment as well as a level of self-satisfaction that I have never felt before in my life. The Haymarket is an accomplishment and an establishment unlike any other. It is a physical manifestation of my dreams and hopes. It is my refuge, my home, and my pal.


The act of arrival at a destination, be it on a train or a plane or by automobile, is not new to me. The act of arriving at success at this level is new. Never before in my life have I been more financially secure. Never have I felt more right foot forward as I approach my destiny. I have not always been a person who sets goals and achieves them. For more than the first half of my life I was adrift and rudderless. I learned how to be an achiever. I started small. And in no way am I now too big to fail. Failure is always within the realm of possibility. But success at this level is new to me. I no longer have to work in the conventional sense. And in that sense, the bet I made with the Haymarket has paid off in spades. Of course I still work. I manage, I stock and order, I count the money, and I pay the bills. But I don’t have to work a forty-hour week (let alone the eighty-hour weeks I used to work when the bar was a coffee shop called Derby City Espresso). In the place of work, I have found a new calling, that of the host, that of the professional drinker, that of the professional entertainer. “Step into my parlor. Let me pour you a dram.”

As an aside, the main point to me isn’t Landan’s reference to being a liar. Rather, it’s the last two sentences in the above excerpt. Meanwhile, LEO’s having none of the maneuvering.

Can you say: narcissist? | Absurd

In a disappointing, absurd turn of events, Haymarket Whiskey Bar reopened last week, with owner Matthew Landan behind the stick and protesters marching outside. About the same time, his attorney filed a lawsuit stemming from allegations on Facebook that Landan had raped women. Landan has denied any wrongdoing, and he may prevail in court, but we have to wonder: What makes him think his bar could succeed now that the court of public opinion has ruled against him?

Readers might consider stocking extra microwave popcorn, because this story’s likely to get even more surreal.