After all, stenography and inexorably multiplying religion columnists can get us only so far.

The November list begins with ten “honorable mention” posts, before concluding with the Top Ten, escalating to No. 1. Stats are derived from Google’s internal numbers listings.

So, neither BOW nor Chalfant gave the okay. It’s possible the Redevelopment Commission authorized it, or even the mayor himself, though it’s unlikely. Coffey’s wasting no time; he’s already skipped ahead to the inevitable excuse: charging drivers to park their cars on city-owned property without permission may have been illegal and all, but it was for a good cause. 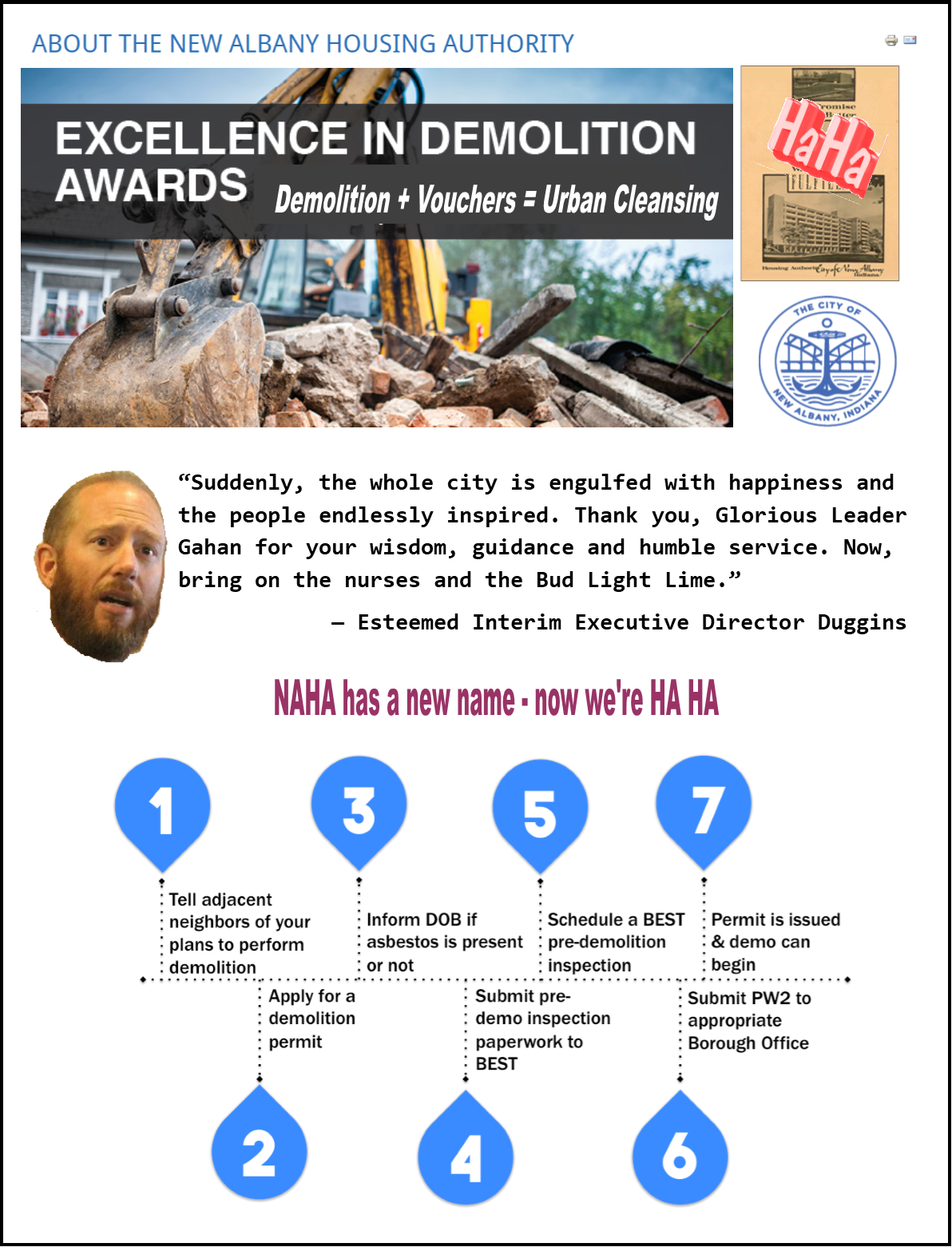 “When internet justice is likely the only justice”: Allegations of rape against Matthew Landan result in the closing of Haymarket Whiskey Bar. Are we learning yet?

At least for the moment, the Haymarket Whiskey Bar has ceased to exist. For Matthew Landan, the bar’s owner, the feces hit the fan on November 13, via rape allegations on social media. It’s been a week and a half, and my aim is to digest the news to date in three sections.

“I asked Mr. (Warren) Nash yesterday about your concern and he said he is not sure that the board of works knew about that situation.”

Consequently, I asked for this issue to be placed on the agenda of next Tuesday’s BOW meeting, if for no other reason than ensuring it becomes part of the permanent public record by making the board aware of it.

The plaque-ing of the New Albany Riverfront Amphitheater began with the late Darrell Sweet, drummer for Nazareth.

Mark Keeler said that the drummer for Nazareth died in New Albany after 1995. I said he died before the pub started business in 1992. Let the record show that Darrell Sweet died in 1999, which means that Mark was right and I was wrong. Can anyone remember why Nazareth decided to play New Albany in the first place?

Interestingly, the reversion has a side effect in the sense of restricting access to the parking garage for traffic traveling eastbound on Market — including those drivers eastbound on I-64 who exit into New Albany and approach downtown from the west.

Louisville Orchestra recap: A big crowd for Rimsky-Korsakov at the Ogle Center on Saturday night (and beers at Pearl Street Taphouse afterward).

On Saturday, the Louisville Orchestra performed at the Ogle Center on the campus of Indiana University Southeast, performing two of the composer’s most popular works. Both crowd and orchestra were large; there were only a few empty seats scattered among the spectators, and something like 55 musicians on stage, including six (!) percussionists.

COMMENTARY: Deaf Gahan mentioned “opioid crisis” in a press release, but this probably doesn’t mean what you think it does, so let’s clear it up.

It seemed like big news earlier this week, but with a wee bit of scrutiny, the spiel is exposed as more of the same New Gahanian institutional flatulence. Three years after Southern Indiana’s opioid crisis exploded into widespread consciousness, both here and throughout the nation …

A great deal of effort has been put into Explore New Albany, a new and evolving website. There may never be a “one stop shop” for fluid situations like downtown, but this portal has definite potential, so check it out. Congrats, Dan. Looking good, indeed.

When Team Gahan’s most recent handicapped-user initiatives turn out looking like this, and all the operatives can do is express public confusion over potential repair options, it’s no surprise to learn the functionaries are on notice to refrain from acknowledging any questions as yet not subjected to formal study in the form of a lucrative contract with HWC Engineering. It’s not Red Tape, it’s Red Alert — and you can expect a reply in a year or so, though only when Jeff Gahan is prepared to “present” it.

A personal request to sign this on-line petition to Jeff Gahan: No demolition without a plan to replace public housing in New Albany.

If you’re in agreement and haven’t already done so, please sign the on-line petition.

We Are New Albany is a grassroots movement being organized by Hoosier Action.

ON THE AVENUES: Harvest Homecoming chairman of the board David White replies to Cisa Kubley’s column of November 2.

Readers, it’s up to you to decide what to think. My position remains firm, in that Harvest Homecoming is an organization partnering with the city, and as such, because public time and money is “invested” in Harvest Homecoming, it is subject to the same transparency and open dialogue as we customarily (and damn well should) expect from elected officials and their appointees. Far more prosaically, having reserved my usual column length for David’s reply and readied no essay of my own this week, there is space to fill.

Harvest Homecoming guest column follow-up: Our peculiar institution has no basis in ordinance, only habit.

I’ll add only that the very weakest arguments mustered in response to critiques of Harvest Homecoming are these: It’s inevitable; it’s always been done this way; if you don’t like it, just leave. Apart from the fact of the city’s existence for 150 years prior to the advent of Harvest Homecoming, it should be pointed out that the festival’s inevitability has no absolutely no basis in statute.

ASK THE BORED: It’s Mt. Tabor Road’s turn to be pillaged as our lumberjack fetishist mayor readies another round of clear-cutting — for the sake of the cars, of course.

It’s been four months since the mayor triumphantly announced what amounts to a survey of previously sawed stumps; having felled hundreds and perhaps thousands of trees during the course of his Ceausescu-esque TIF and Green(!)way projects, he’d now prove there was the beginning of the precursor to an embryonic “master” plan to reforest the city by 2065 or so.

Mathes Pharmacy will expand into a new building. Congrats to a New Albany indie stalwart. 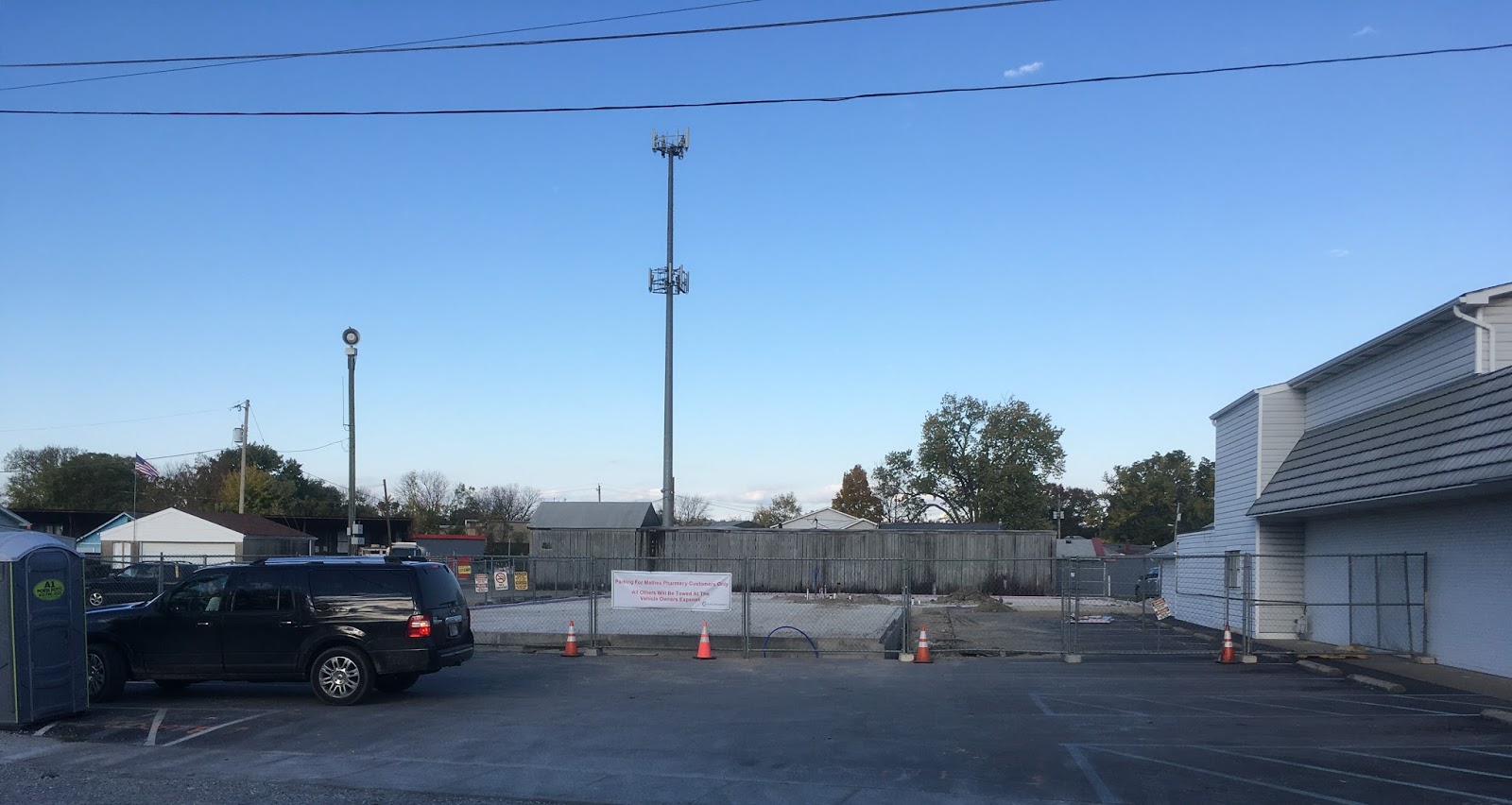 Chain and big box subsidies cost us far more than we imagine, but who cares so long as Starbucks is there?

In short, government picks winners, and the chosen winners usually are the ones who had enough money to start with.

THE BEER BEAT: It’s a cornucopia of ephemera, from Quaff On to Lazlo Toth.

What I didn’t anticipate in 2014 was (first) that Big Woods/Quaff On would be the next brewery to fulfill my prediction, or (second) that it would do so not on the Indiana side, but in the vacated Doc’s Cantina space in Louisville.

THIS JUST IN: ‘We Are New Albany,’ a campaign to save the homes of more than 1,700 New Albany residents from planned demolition, will publicly launch on Thursday at 4:00 p.m. at the City-County Building.

“I was born and raised in New Albany, bouncing around house to house because of unaffordable rents” says ‘We Are New Albany’ campaign Deputy Chair Brandon Brown, a resident of one of the properties slated for demolition. “I will not let the homes in my neighborhood be demolished, forcing children into the insecurity I struggled with at their age. Mayor Gahan, we call on you not to demolish a single unit without a plan to replace it.”

ON THE AVENUES: A downtown business owner’s open letter to Harvest Homecoming.

These aren’t new issues, these aren’t new complaints. At what point will the Harvest Homecoming committee and the city finally make adjustments for the betterment of the whole community, not just those who enjoy the festival?

These handy visuals illustrate “The Ripple Effect When You Shop Local.”

Now for a few facts for business owners and holiday shoppers alike. 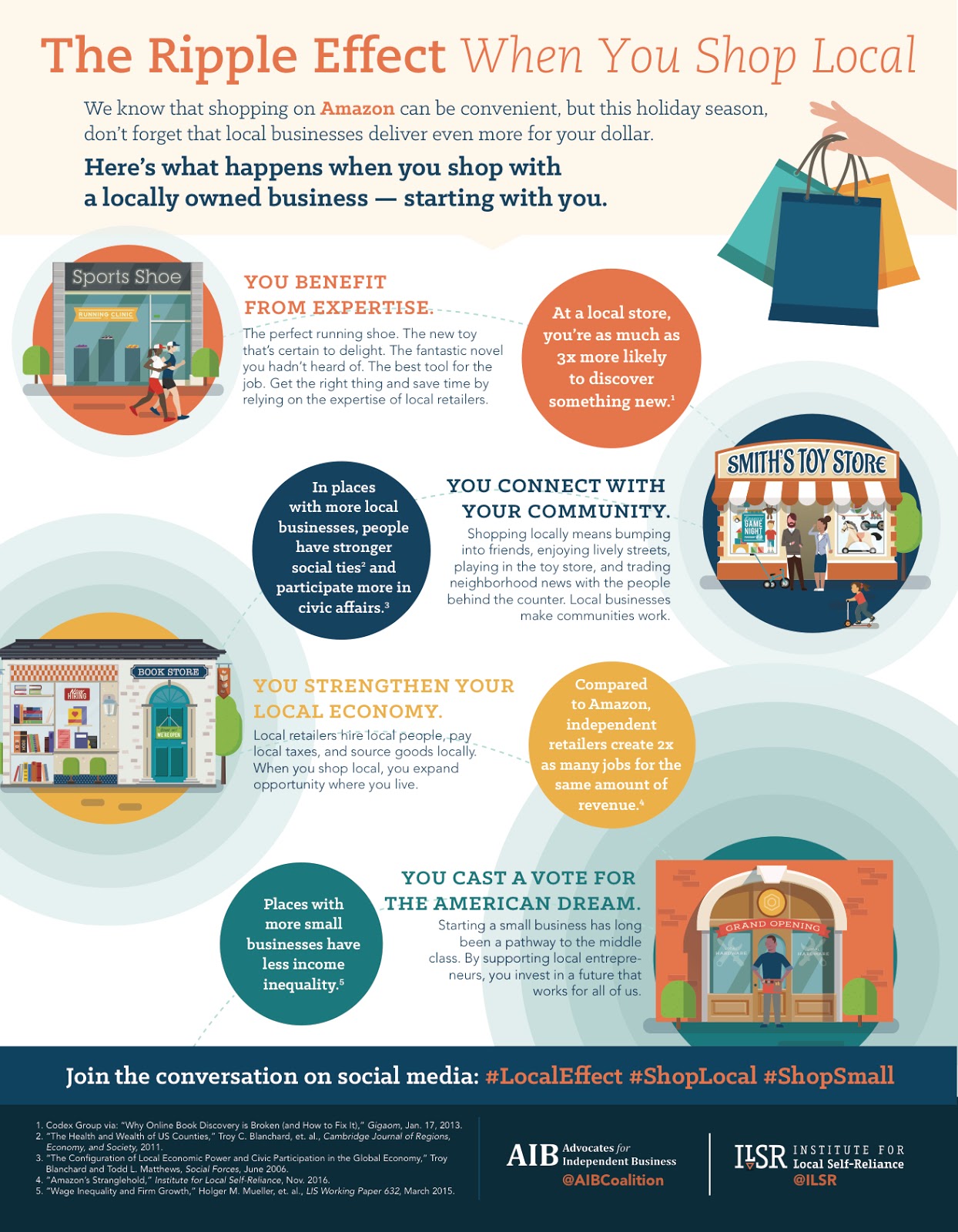