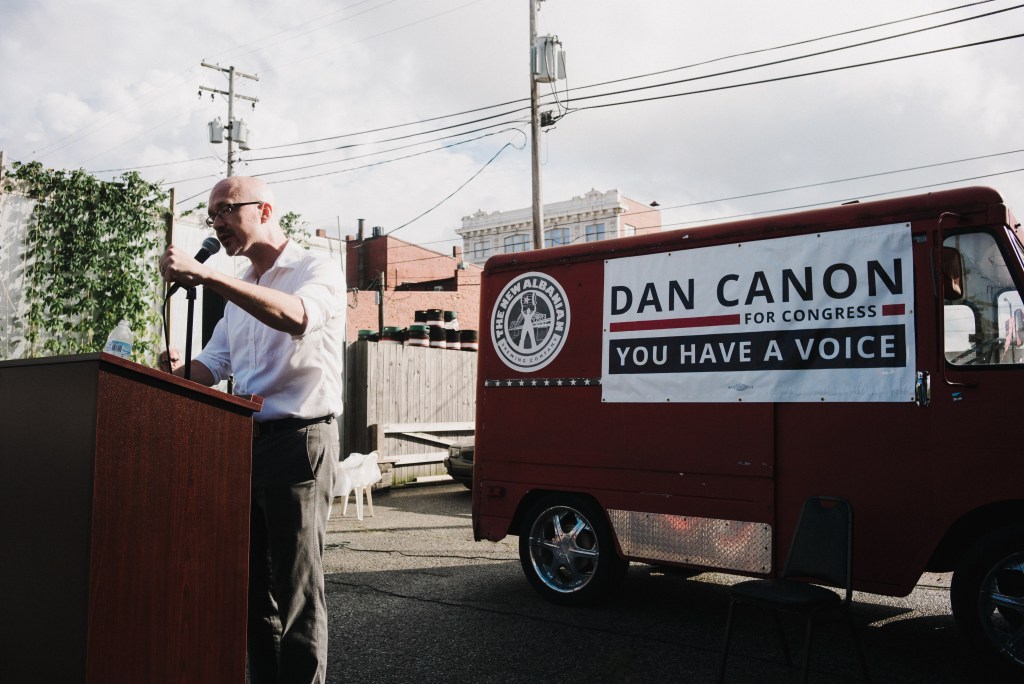 In spite of the many reasons that seeing this photo might annoy me, only one of which pertains to the candidate himself, I can’t convey my pleasure in seeing it continually pop up during coverage of Dan Canon’s congressional campaign.

The photo dates to Canon’s campaign kickoff party in July at the downtown NABC location, whatever it’s being referred to these days.

Jordan Valerie spoke with Dan Canon on the podcast about his candidacy, America’s racist criminal justice system, and some of his more controversial opinions. Make sure to follow Dan Canon on Twitter @dancanon, like him on Facebook, and check out his website.

It’s only been a few months, so please forgive  me for repeating a few paragraphs from July 8 — and no, not yet. Is Clarence Darrow still practicing?

THE BEER BEAT: Dan Canon and the welcome return of progressive thinking at NABC.


I was in Chicago on Thursday, doing my little bit for Anglo-American relations, or else I would have walked down Spring Street to my former beer joint to toast Dan Canon and his congressional run on the occasion of his well-attended kickoff party — although actually the words “former beer joint” won’t be 100% accurate until the deal is done and a check is written.


For those readers who’ve been asking for an update: Two years later, and no, not yet.


Apart from all this, I’m sincerely delighted to see progressive politics return to Bank Street Brewhouse, which since my absence has been renamed the NABC Cafe & Brewhouse. You’ll understand it’s difficult for me to think of it other than BSB, founded to further to cause of Progressive Pints.


Somewhere along the way, the ghosts of Lord Cornwallis’ musicians struck up the tune.


The serving men doe sit and whine, and thinke it long ere dinner time:
The Butler’s still out of the way, or else my Lady keeps the key,
The poor old cook, in the larder doth look,
Where is no goodnesse to be found,
Yet let’s be content, and the times lament, you see the world turn’d upside down.


So it was that back in 2015, during my indie campaign for mayor, I was expressly forbidden by my business partners from hosting campaign events. I was told that we simply had to keep politics out of the business.


Consequently, I’m terribly envious of Dan for his signage on Rosa, the draft truck (shown above).


In 2015, she was off-limits to my stylish pirate logo, in spite of it being hard to imagine a better place for a skull and crossbones than a vehicle named for a legendary activist — nay, Marxist, just like the fellow whose triptych is the single most famous feature of the Red Room at the Public House.


Noting that I’m a shop floor kind of guy, know that I’ve never doubted the political instincts and integrity of NABC’s staff and crew. They’ve always gotten it, even when the owners didn’t, and I’ll always appreciate their support.


Ironically, my partners weren’t ever concerned that a lefty progressive like me would chase away local Republican customers, most of whom converse freely with me whether or not we agree on politics.


Rather, they were terrified of retaliation from the local social and civic favors club known as Let’s Pretend We’re Democrats, for whom the emerging Canon candidacy might be the most entertaining litmus test in all recorded history.


Well, in name only. It simply cannot be that Canon and the likes of Caesar both are Democrats, at least without them or me or all of us doing heavy drugs, and there’s something in so very instructive (not to mention blatantly hypocritical) herein about NA’s perennial political dysfunction that I really have no choice left but to continue drinking heavily and waiting for a check in the mail …


… Most importantly of all, welcome back to the real participatory local world, NABC. I missed your political consciousness these past two years. It was something I’d taken for granted. Maybe it will survive without me, after all.