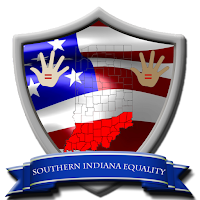 We received a question from a regular reader.

How do I get in touch with Southern Indiana Equality? Their web site and Facebook page are gone. Do they still exist?

The answer is no.

According to SIE president Brad Bell, “We disbanded right after Jeff Pride. Too many other groups sprouted up doing primarily the same thing, plus we (SIE) never got good traction to get moving in the right direction.”

Southern Indiana Equality began in 2015, in part as a response to the city’s “built to be docile” Human Rights Commission.