For reasons unknown, the reversion of Market Street to two-way traffic (specifically, between State Street and W. 5th) was not part of the federal 80-20 funding mechanism of the grid modernization and (and campaign monetization) project.

It has happened. Interestingly, the reversion has a side effect in the sense of restricting access to the parking garage for traffic traveling eastbound on Market — including those drivers eastbound on I-64 who exit into New Albany and approach downtown from the west. 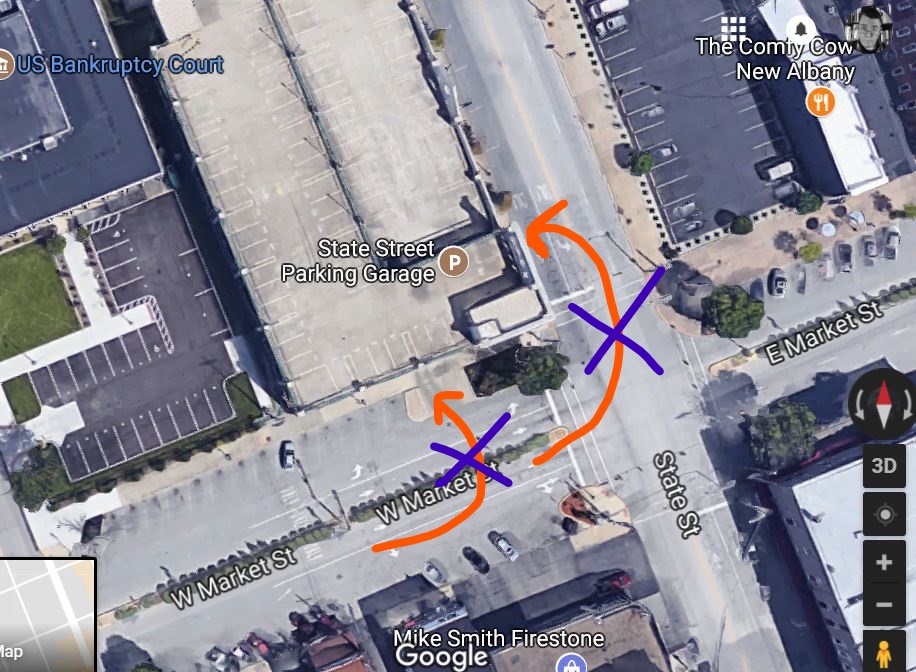 The median precludes a left turn into the Market Street garage entrance; while a left turn into the parking garage from State (northbound) remains theoretically possible, it involves crossing two lanes of traffic where southbound cars are stacked headed south at the light.

Of course, drivers eastbound on Market can circle the block via Pearl and Spring to get back to State southbound, and easy garage access; ironically, ending the necessity of making such loops was a prime reason for the reversion to two-way traffic.

In my opinion, both medians between W. 1st and Pearl would have been better removed, traffic lanes narrowed and moved to one side of the street or the other, and room for human use added. For Jeff Speck’s innovative (and predictably discarded) thoughts on this stretch of street, go here and scroll to page 68.

For previous “Grid Control” series links, go here: Grid Control, Vol. 28: Elm Street capitulates to two-way modernity with a whimper, not a bang. Now, to the next stage.