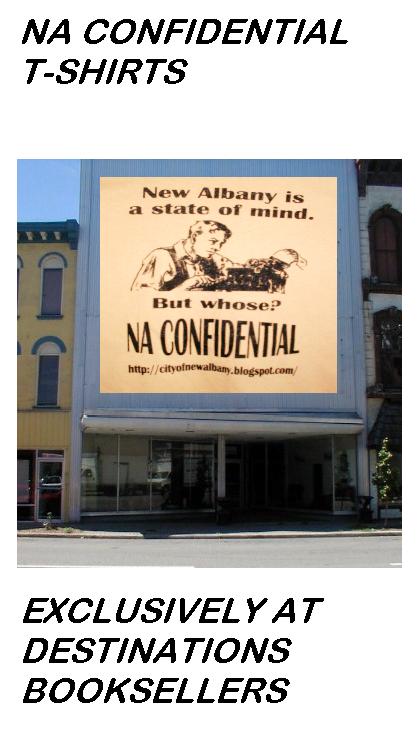 This essay is revised substantially from its original publication on the occasion of the blog’s 10th birthday in 2014. Much has happened since then, both publicly and privately, but through it all one question still remains: New Albany is a state of mind … but whose? We continue to observe the contemporary scene in this slowly awakening old river town, because if it’s true that a pre-digital stopped clock is right twice a day, when will New Albany learn to tell time?

As usual, I pondered the possibility of a party in celebration of making it another year without my being institutionalized, but there’s no pressing reason for a gathering. We need only gather at the pub of our choice for commemorative elixirs (Progressive Pints remain my drink of record, though fewer than before) and call it good.

Thirteen years is a long time. Admittedly, I’ve been guilty of fudging when making the claim that the blog’s conception was a direct result of massive personal despair in the wake of George W. Bush’s re-election; obviously, the actual NAC birth date in October preceded Election Day in 2004.

However, in retrospect it is perfectly accurate to suggest that the grim promise of four more wasted White House years merely exacerbated the development of an epiphany already budding.

Since then, it’s hard to tell whether matters have gotten better or worse. In 2016, in a cataclysm at once bizarrely inconceivable and entirely understandable, election day gave us Donald Trump in the presidency.

In New Albany, we already possessed ample reason to resist — and once we’re done with Gahan, it’ll be on to Trump. More than a blog will be needed to cope, and so I’ve started drinking bourbon.

However, the blog’s opening phases remain somewhat intact in the historical record.

During the years 2003 and 2004, several previously disparate threads gradually were coming together in my life. The most significant factor was my own renewal. My first marriage was over, and a wonderful new relationship under way.

We felt sure enough about our combined future prospects to begin shopping for a house, and in 2003 came the purchase of a home located on Spring Street, in what is now occasionally referenced as Midtown. Halloween of 2017 will make 14 years of living there.

Verily: Trick or treat? If we’d only grasped these nuances of civic foreshadowing.

Even before the ink was dry on our bouncing baby debt, I’d experienced dozens of walks and bicycle rides through the deserted wastes of a criminally neglected downtown, with a huge question eventually looming over all of it: Why was New Albany’s devastated former business district downtown different from those vibrant quarters I’d visited in other states and nations?

Was the decay avoidable? Could it be these people in other places knew something we didn’t? If so, why weren’t we emulating it? Was it money, politics, culture … or something in the water?

The questions mounted, and easy answers seemed frustratingly elusive. I didn’t fully understand at the time the extent to which my ground was shifting. Thoughts previously devoted to escapist obsessions (generally, variants of beer and travel) began turning elsewhere, toward a vague context of rootedness.

Surely, something could be done, right there in the city’s core.

NABC already was brewing on the north side, but it was only a small facet of the “good beer bar” business model. It began to occur to me that the answers to these questions of everyday life in one’s place of residence impacted this model. As a brewery, perhaps NABC was transitioning toward a fuller embrace of local existence. Might brewing make sense as the ultimate, local, creative act – in fact, what we should have been aspiring to achieve from the start?

This emerging epiphany was about place, and one’s place in it. As the presidential election year of 2004 advanced toward the pathetic re-enthronement of the second-worst American chief executive ever, an absurdity began gnawing at me.

Most of us spend vast chunks of our lives living in a specific place, but spend much of our time debating issues far beyond it. Granted, being aware of the world outside remained absolutely vital, and I wasn’t about to renounce my planetary citizenship, but when it came to action, as opposed to verbiage, what chance did I have of influencing the tragedy of a second Bush administration?

To devote precious psychic energy debating these faraway issues left none to apply to matters nearest me, when these were precisely the sort of local conditions best addressed through direct participation. How to make things better right here, outside the doors of my home and business?

At this juncture, a deeply personal proclivity came into play, because what I decided to do first was write about it. After all, everyone is entitled to my opinion, although some might say that writing and action aren’t the same things at all. I disagree. Ideas, words and how we use them do matter.

Lately I’m phrasing it a bit differently: You’re entitled to my opinion, and as time has passed, I’ve come to see that facts are crucial — but they should never stand in the way of a proper polemic.

Quite early in my life, it was obvious that being able to arrange words on a page was essential to my being. I don’t know why. It just is. Through most of my adult life, I have awakened to a jumble of thoughts centering on topics for the day, along with thoughts on how this jumble might be untangled and organized. They must be written, as soon as possible, in order to expel the current crop of thoughts and make room for others.

I suppose it’s a compulsion of sorts. Music always plays in my head, alongside sentences forming there. I’m convinced that when these idiosyncratic synapses cease to occur – or when math and numbers finally start to make sense to me – death will be imminent.

Concurrently, what better way to facilitate these needs in 2004 than electronic media? It required no start-up money. I could write locally, and disseminate globally. And so it has gone, from then until now. It builds character, and makes me a better gadfly.

On the occasion of this column, NAC’s 12,108th post, thanks to Jeff Gillenwater, Randy Smith and the late Lloyd Wimp for their credited contributions over the past nine years, and to all the green mice, guest columnists, moles, agitators and malcontents who help our ideas to gestate. Thanks to my wife for tolerating my writing and cage-rattling compulsions. Thanks especially to you, the reader.

Doing so has required a learning curve, but I’m damned proud of the results, and I think we’ve helped provide a body of work and an alternative record, while offering more ideas per square pixel than New Albany’s local political power structures and non-local media combined. Disney does fantasy just fine. I prefer the real world.

Has any of it really mattered? It’s a question others must answer. I’m too close to the beating heart to tell. Personally, I think NAC is ridiculously underrated, particularly by local “media” outlets, but of course this doesn’t matter all that much. It’s their loss, and that’s life.