I chose “secularist” because the mood struck; “infidel” was close, but as you can see, there’s a non-delusional shading for every occasion. 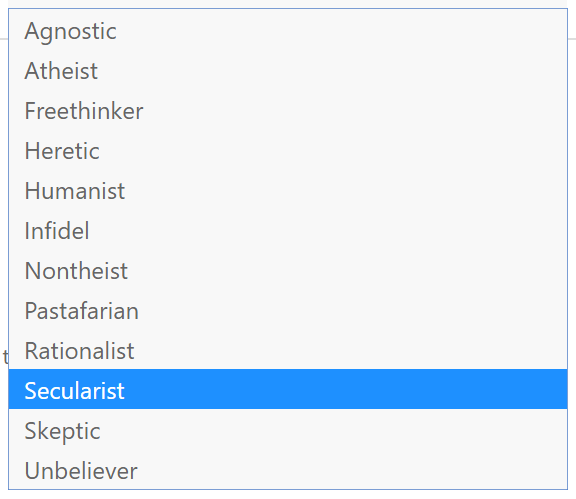 It’s one of my go-to orgs, based in one of our favorite towns.

The Freedom From Religion Foundation, based in Madison, Wis., a 501(c)(3) nonprofit educational charity, is the nation’s largest association of freethinkers (atheists, agnostics), and has been working since 1978 to keep religion and government separate.

Remember the time when FFRF called Deaf Gahan on the carpet?

Maybe this year’s event can be a weenie roast atop the smoldering remnant of a demolished public housing unit.

Meanwhile … a chance to express yourself.

Join FFRF’s Out of the Closet Virtual Billboard Campaign

Declare and share your nonbelief! Although the nonreligious — including one in four U.S. citizens — is a significant segment of the world population, many Americans have never knowingly met a nonbeliever. You can help dispel myths, educate and promote reason by adding your voice, face and message to FFRF’s friendly neighborhood freethinker campaign. This is your chance to proclaim you’re a freethinker and why. It’s working for the gay rights movement. Now it’s time for atheists and agnostics to come out of our closet. Many faces make Enlightenment work.