There were two posts on October 23, 2007. The first refers to the infamous and now entirely forgotten era of the Trog Blog Wars.

Okay, so I changed my mind …sue me already. 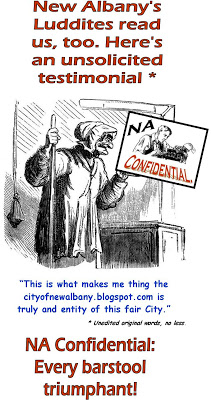 
The second posits the inconceivable (DNA being neutral about politics prior to its annexation by Deaf Gahan) grafted onto the “look how far we’ve … er … never mind.” Stay tuned for 2019, when Deaf will dodge many of these same questions.

Develop New Albany, the City’s non-profit, Main Street organization is hosting a Mayoral Candidates Forum to be held on Wednesday, October 24th from 7:00 – 9:00 pm at the Strassweg Auditorium at the New Albany-Floyd County Public Library.

The sessions will be moderated by Greg Sekula, Develop New Albany Vice-President, and a series of questions will be asked by the moderator that relate to the issues of downtown and neighborhood revitalization. The public is invited and encouraged to attend.

The following topical issues are likely to be covered in the forum in no particular order:

1) Your vision for Downtown New Albany;

2) Strategies for furthering economic development in Downtown New Albany and surrounding older business districts such as the Vincennes and State Street corridors;

4) Strategies for promoting and increasing homeownership and re-investment in older urban neighborhoods;

5) Relationships between the City and local neighborhood associations and non-profit groups;

6) Historic preservation, including the role of the Historic Preservation Commission, historic district designation, and design guidelines;

7) One-way vs. two-way street circulation patterns in the Downtown;

8) Enforcement of violations of City ordinances;

13) Relationship between the office of Mayor and City Council;

14) The role of public transportation in downtown revitalization and regional economic development;

15) Strategies for the City and school system to work together to strengthen inner-city schools and what impact that would have on downtown neighborhoods; and