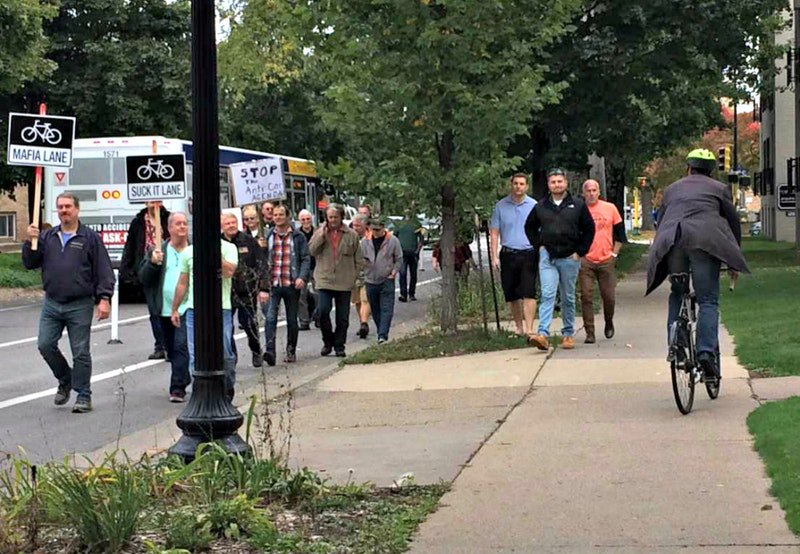 I hesitate passing along this information, given the existence locally of satire-resistant automobile supremacists. They might get ideas — then ram the ideas with their monster trucks.

But allow me to offer this prediction: If such a protest occurs in New Albany, the aggrieved won’t (in many cases can’t) get out of their cars to walk the parade route.

I mean, who wants to carry that bag of Rally’s Archer Daniels Midland Burgers through the Nazi Lane when it can rest so very handily right there on the front seat?

How a Satirical Call for Bikelash Became a Real, Invective-Laden Protest, by Jared Goyette (CityLab)

You probably haven’t heard of internet prankster Jeremy Piatt, but you may be familiar with his work. A mock GoFundme campaign to “Get Kanye out of debt” was widely covered in the press as serious, with Kanye’s camp eventually having to clarify that no, he didn’t want the money.

Piatt, a graphic designer, recently pulled off a sequel of sorts by stirring up the hornet’s nest that is the the current bike-lane debate in Minneapolis …

… But some people took his invitation seriously. On Sunday, a small crowd of about 15 to 25 people showed up to protest at the designated place, the intersection of 26th and Hennepin Avenue, including two city council candidates, Joe Kovacs and David Schorn.

The protest was even more intense than Piatt had satirically called for: As Minneapolis’s ever-present political Twitter account, @WedgeLIVE, noted, people carried signs that read “Mafia Lanes,” “Suck it Lanes,” and “Nazi Lanes.” For extra effect, sign posts were painted red to look like they were dripping with blood.