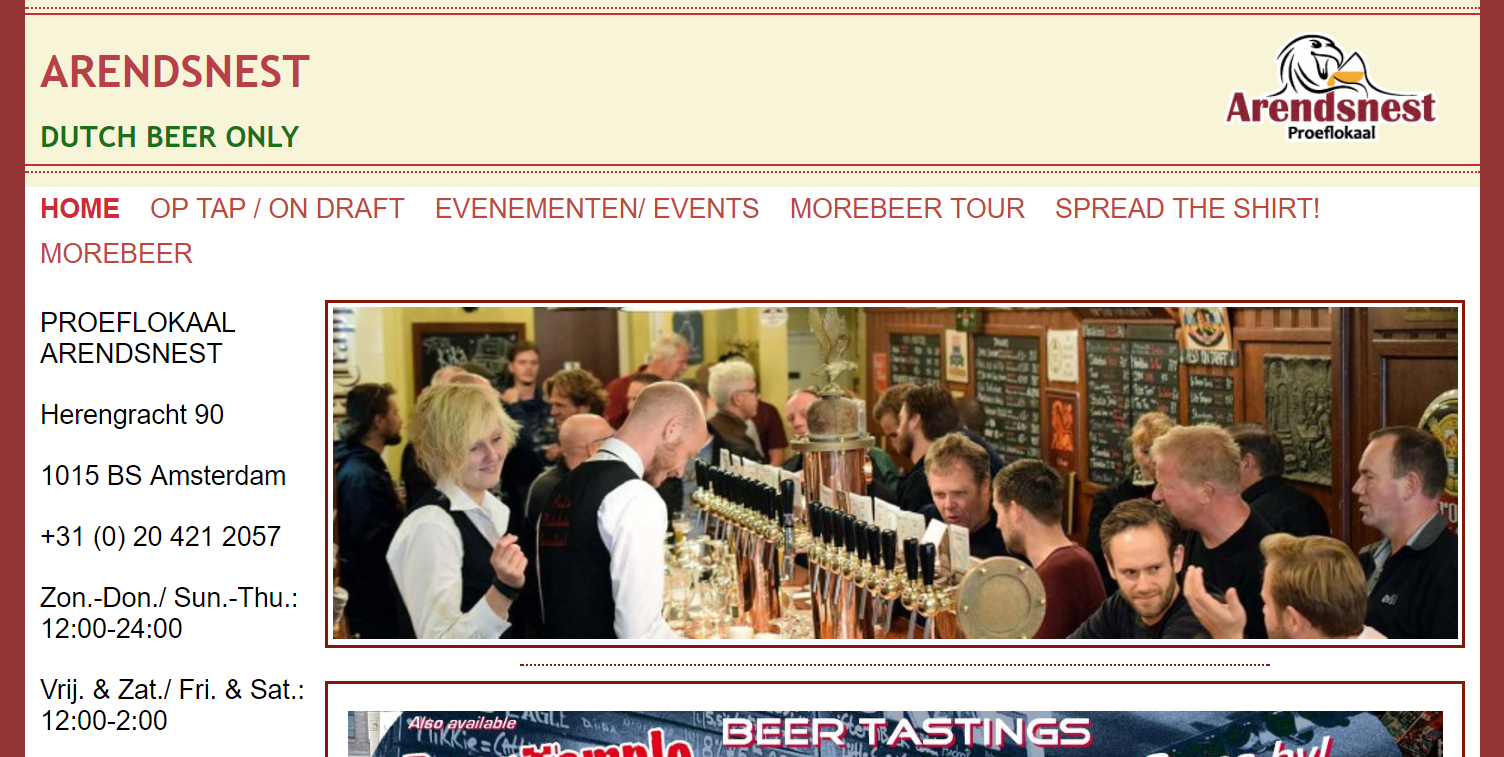 At the precise moment of this post’s pre-set publication, we’re likely eating breakfast in Haarlem, a city that is much to my liking by virtue of having friends there, as well as its proximity to Amsterdam to the east, and the sea to the west.

To tell the truth, there have been occasions when I’ve stayed in Haarlem and not even bothered to go to the bigger city 20 minutes away except to fly home.

Granted, there are distinctive museums, cultural attractions, food, drink and frivolity in Amsterdam, and yet Haarlem always has struck me as just fine in its own right, smaller and no less interesting.

Whether Amsterdam or Haarlem, one classification of pub- or tavern-being that has always impressed me in Holland is the institution of the brown cafe. Here’s a good description from a non-beer-centric source.

You haven’t really tasted Dutch beer until you’ve tasted it in Holland, served Dutch-style in a real bruine kroeg (brown cafe). These traditional Dutch bars are unpretentious, unpolished institutions filled with camaraderie, like a British pub or an American neighborhood bar. In a brown cafe, pouring another beer is much more important than dusting off the back bottles on the bar; the ritual is to draw a beer to get as much foam as possible, then to use a wet knife to shave off the head between a series of final fill-ups.

Even if you’re not a beer lover, venturing into a brown cafe in Amsterdam will give you a peek into the city’s everyday life. In old neighborhoods, brown cafes are on almost every corner — you can’t miss them. Most have lacy curtains on the bottom half of the window, and perhaps a cat sleeping on the ledge. In winter (and sometimes into spring), their front doors are hung with a thick drape to keep out drafts. Once inside, you’ll find the smoky, mustard brownness that’s unique to an Amsterdam brown cafe, the result of years — no, centuries — of thick smoke and warm conversation.

There may be booths or little tables sprinkled around, but the only spots of color and light will be the shining metal of the beer tap and, perhaps, a touch of red still showing in the Persian rugs thrown across the tables (a practice that’s typically Dutch, if you recall the old paintings). You’ll feel the eons of conviviality the minute you walk into a really old, really brown brown cafe. Some have been on their corners since Rembrandt’s time, haunted by the ghosts of drinkers past.

Naturally, the choice of beer in a typical brown cafe during the time of my first visit to Amsterdam in 1987 would have been Dutch golden lager, whether Heineken, Amstel, Brand, Grolsch or numerous others.

The whole of the Netherlands has long since exploded into pervasive beer craftiness, and I’m guessing this phenomenon has altered the selection in brown cafes just like it has everywhere else.

There are many great beer bars in Amsterdam these days, though my personal favorite is ‘t Arendsnest, which means Eagle’s Nest. It’s also the name of the man who founded it.

Morebeer is the company owned by Peter van der Arend, passionate beer lover and beerologist. He started his venture in the year 2000 when he opened the Dutch beer bar Proeflokaal Arendsnest, located at the Herengracht 90 in Amsterdam. Proeflokaal Arendsnest was the first bar to serve exclusively Dutch craft beers.

The Dutch word “proeflokaal” (test classroom) appears to be one of those only vaguely translatable concepts, although at root it implies something on the order of testing/tasting room, and may have originated from the habit of jenever (Dutch gin) distilleries operating sampling venues nearby.

When Peter van der Arend opened his specialty Dutch beer bar, there were only a few dozen breweries in the Netherlands. The number now is in the hundreds. He definitely was on the front end of a savory trend.

At the moment, breakfast. However, beer thirty will arrive, and if we’ve had the chance to explore Amsterdam this time around, hopefully a rest stop at ‘t Arendsnest has been included in the itinerary.