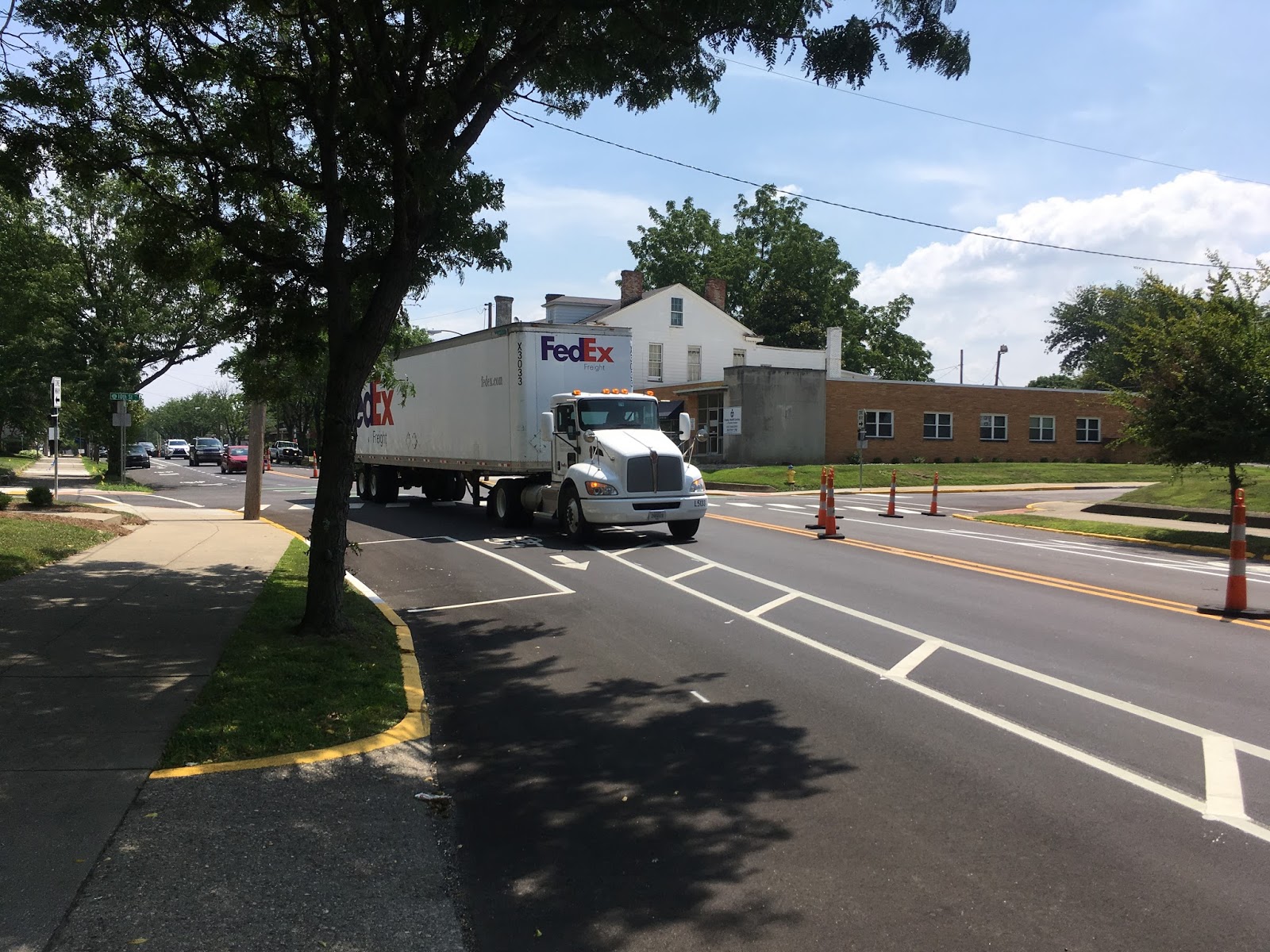 The following words summarize the scandal-plagued Gahan administration’s approach (more accurately, its absence) in using Jeff Speck’s street study as a blueprint for “grid modernization,” or, the project that dare not mention “two-way streets” publicly.

If it bikes, blame it.
If it walks, marginalize it.
If it drives, subsidize it.
— Attributed to Dan Kostelec

Speck encouraged state-of-the-art bicycling infrastructure as a considerable component of traffic calming and walkability enhancement. City Hall rejected almost all of it, for precisely the same reason it fells so many trees: minions neither bike, nor walk.

What they have not personally experienced, they cannot fathom, which is why this formerly shady walk along the river now is denuded of foliage and is cleared as wide as an interstate highway. More on this, another time. 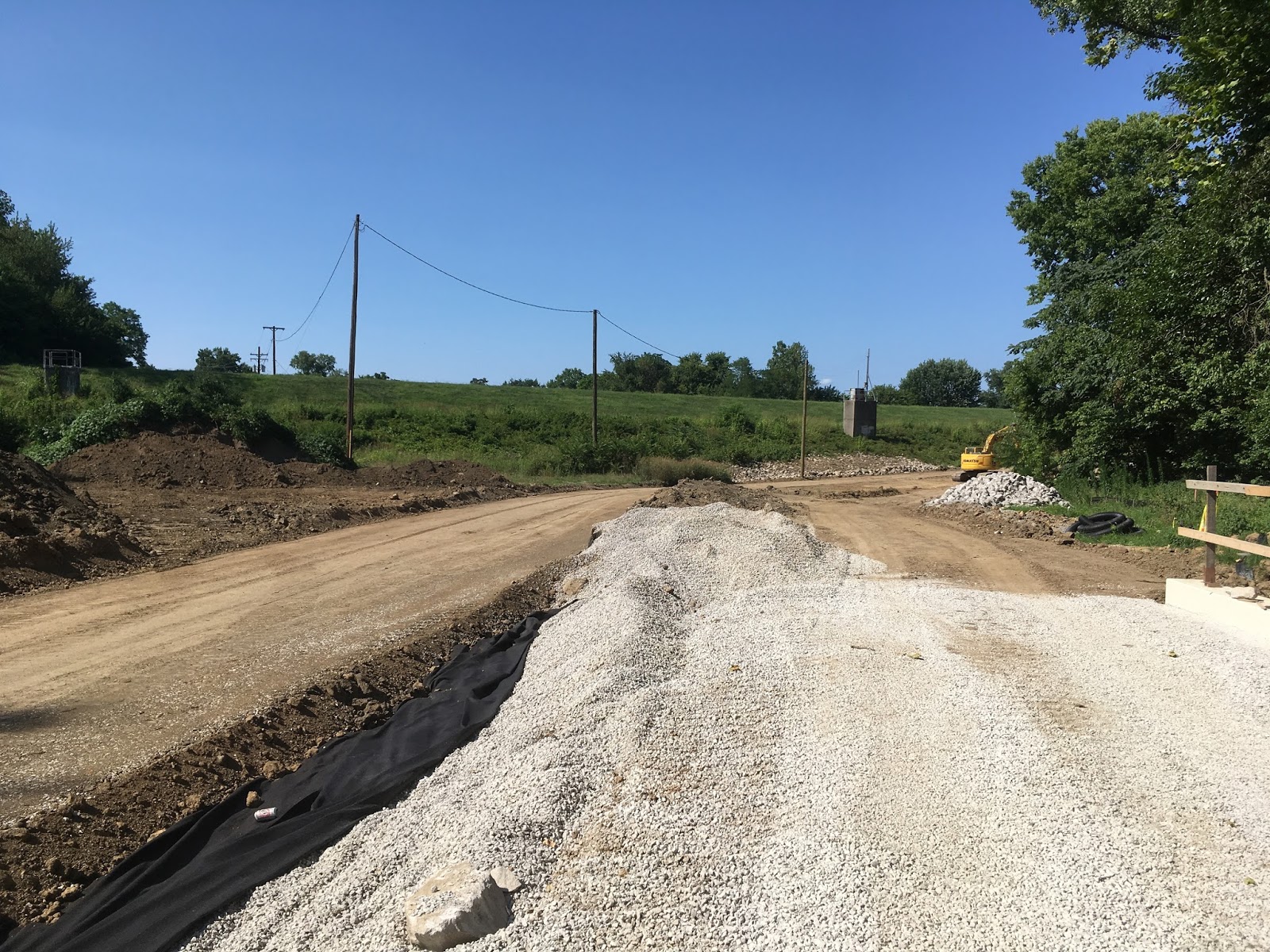 As noted previously, once Speck’s study was handed to HWC Engineering for political monetization, members of the public saw nothing of it until the striping began, at which point we’ve seen plenty, including errors and issues, from which City Hall has fled as quickly as chihuahua legs will carry its timeservers.

Among these: varying parking space measurements, misdirected cross-hatching in bike lane buffers, bus stops blocking church parking, and the future death trap at Spring and 10th (above). Recent striping on Vincennes now boasts a bike land symbol half on asphalt, and the other half on curb cut.

Returning to the point: Had Team Gahan ever been serious about grid “modernization,” bicycle infrastructure would have been vastly improved as a result of current expenditures. However, it has not been and will not be, and Speck’s study has been largely stripped of usefulness as it pertains to bicycles.

We can expect to see this plain fact obscured by the celebratory use of the most magical symbol of all, one outranking even the mud-flats-anchor in civic importance. Follow the tire tracks to spot the symbol in this photo: 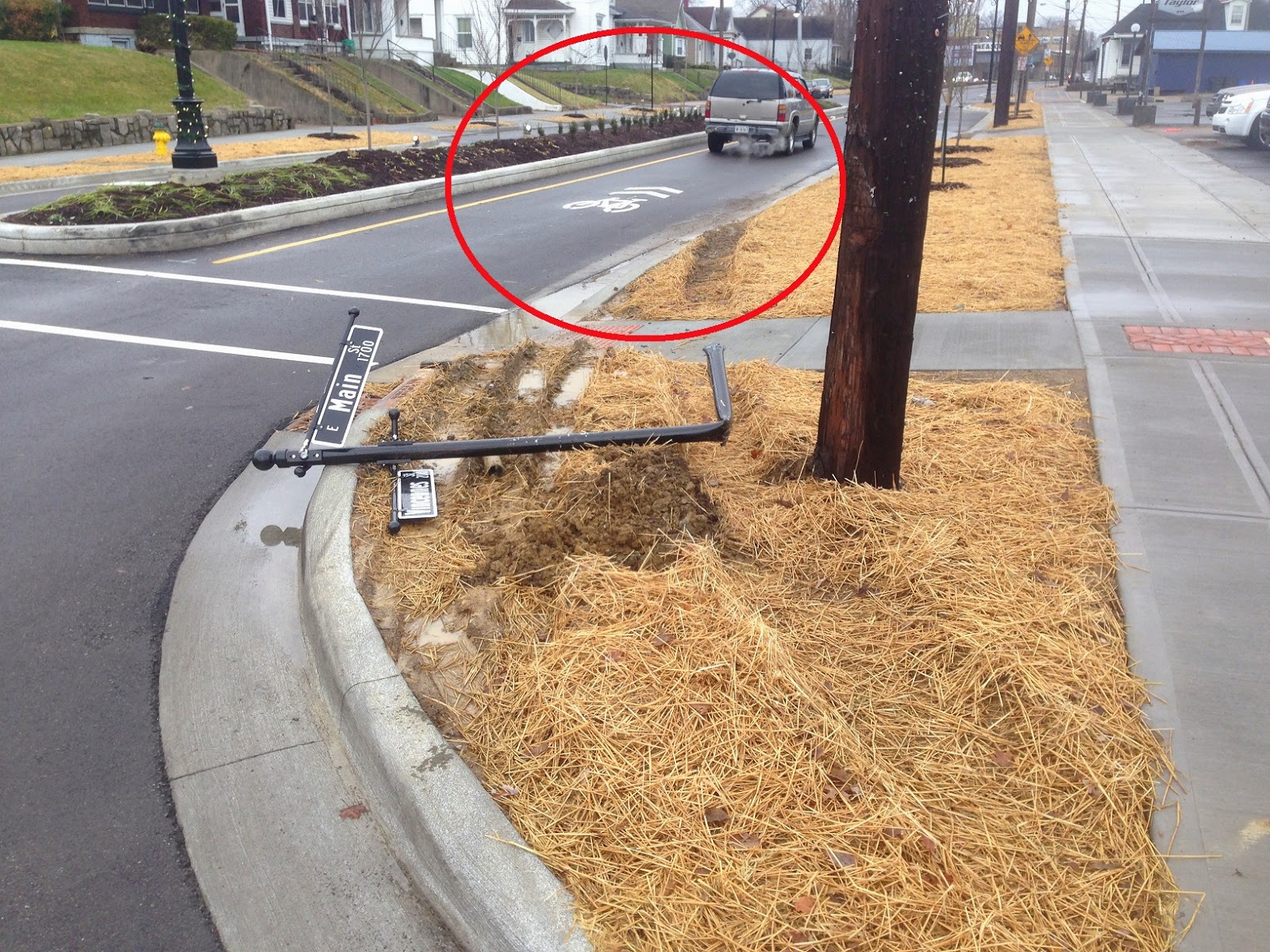 The sharrow, otherwise known as the gift that keeps on absolving planners from planning. Political willpower might keep the sharrow in remission, but in New Gahania … mayoral conscience long since got doored.

Speaking of dooring, those too-narrow parking spaces on the north side of Spring between Vincennes and 4th will increase the likelihood of dooring.

When was the last time you parked your car on a busy street and came into inches of opening your door in front of an oncoming cyclist? We’ll be honest here and tell you that it has definitely happened to us once or twice, and it is SCARY. It’s easy to forget that vehicles are dangerous, even when parked!

Now, the prospect of causing a collision when the motor is already turned off sounds like something that would be found in the “weird news” section of your town paper, but it’s something that happens all of the time in big cities. It’s called “dooring” and it can be deadly for both the cyclist and the driver.

On a slightly more philosophical plane:

When Freedom’s Just Another Word for “Get Out of My Way”, by Tony Dutzik (Frontier Group)

Over a recent vacation, I picked up Laura Everett’s new book, Holy Spokes, a meditation on the spiritual aspects of urban bicycling, which, it turns out, extend beyond praying for one’s life and calling down the wrath of God on that dude who cut you off.

In one poignant chapter, Everett, who is an ordained minister and the executive director of the Massachusetts Council of Churches, describes her sense of loss after an injury sustained in a crash kept her off her bike for a prolonged period of time:

Gone was the pleasure of moving at my own speed, on my own route, going where I wanted when I wanted. Now I was dependent on other people to take me where I want to go, on their schedule, when they wanted.

The passage reminded me of something else I’d read recently: Boston Globe columnist Jeff Jacoby’s lament for his loss of “auto-nomy” when he chose to give up his daily car commute for the MBTA Green Line following the relocation of the Globe’s offices downtown:

The similarity between the two passages got me thinking: Could it be that, deep down, cyclists and drivers – despite often being at odds – really want the same thing? Could it also be that the desire to travel comfortably and safely at the time and in the manner of one’s choosing extends beyond those categories – even to transit riders, who are more likely to use a transit service if it serves more places they want to go, faster, more frequently and more reliably?

Or, more likely, City Hall will simply capitulate when a prominent Democratic donor-to-be-named upholds the sanctity of auto-centrism.

At first, cycling advocates in Baltimore were ecstatic. After many years of lagging well behind other towns, in recent months the Maryland city made big strides to grow its bicycle infrastructure: It debuted a bike share program, a trio of protected cycle tracks, and a larger network of 122 miles of bike lanes by the end of 2016.

Then things got ugly. Residents living near the cycle tracks pushed back, raising questions over lost parking spaces and whether driving lanes were being narrowed at the expense of cars.

Team Gahan’s view of “grid modernization” has been to spend millions improving infrastructure for the unchanging dominance of vehicular traffic, while cheapening or dispensing entirely with other possibilities to enhance non-automotive use and genuinely implement modernization.

It’s a bare minimum but a huge missed opportunity, and I can only hope that some day we’re able to make good on Deaf Gahan’s crippling lack of vision — and that no bicyclists are injured or killed until such a time arrives.

Grid Control, Vol. 14: Yes, you can still park on the south side of Spring Street during the stalled two-way grid project.


Grid Control, Vol. 13: “Dear Deaf Gahan and minions: FOR THE LOVE OF PETE, STOP TRYING TO BE COOL AND DESIGNER-ISH. YOU’RE NOT, AND IT’S EMBARRASSING ALL OF US.”