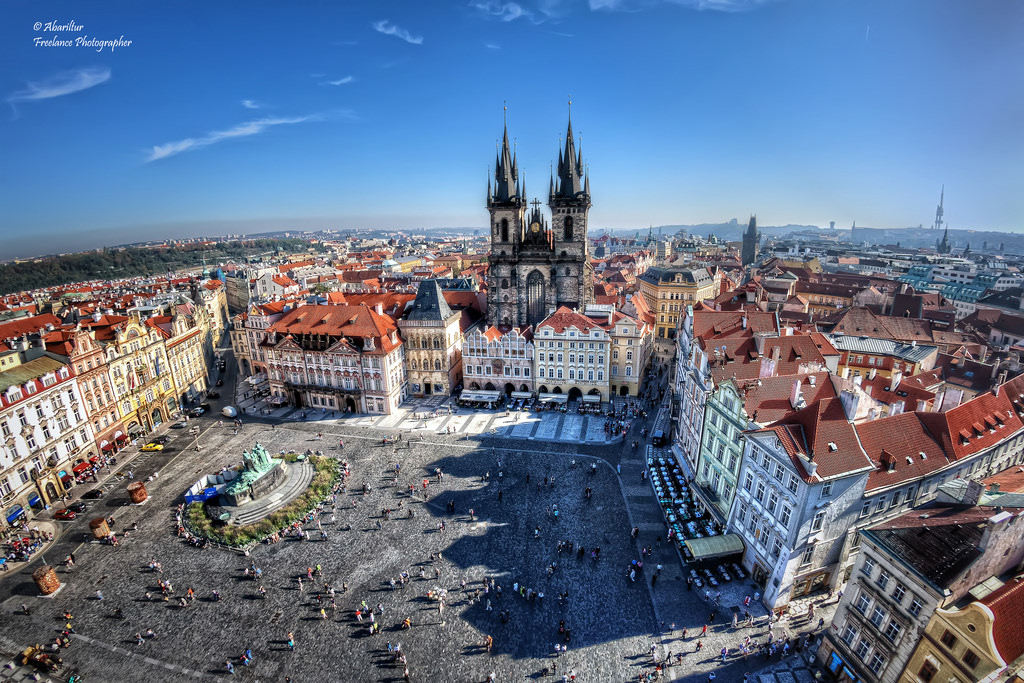 Previously: 30 years ago today: Our sports club beds, glorious Prague and beers at U Fleků.

One vital piece of Prague is missing from the 1987 narrative. It’s Staroměstské náměstí, or with fewer diacritical marks, the Old Town Square.

On many subsequent trips to the Czech capital (most recently in 2005) I’ve invariably found myself drawn to this square in spite of its recent gentrification after the fall of communism.

Very few European capitals survived the 20th century with such an urban vista intact. In the case of Prague, Old Town Square isn’t the only one — and it may not even be the most impressive.

Probably my infatuation with this vicinity stems from this basic question:

“Roger, if Staroměstské náměstít is so special to you, why didn’t you photograph it during your first visit to Prague in 1987?”

There wasn’t anything to photograph.

This requires a lengthier explanation, and so following is an extract from a much longer essay* I wrote about a deceased rock music performer roughly my own age, with the key passage underlined, only lightly edited and updated for clarity.

And, note also that there’ll be more to say about the fascinating Automat Koruna in a separate posting on THE BEER BEAT.

In 1989, during my third Europhile’s pilgrimage, I was in Prague. It was my second visit to the Czech capital, which to all appearances at the time was irrevocably Communist.

To have suggested to anyone that a largely bloodless revolution would occur by the end of the year, as part of monolithic Soviet Bloc dominoes crashing to earth all along the non-Cuban international landscape, would have marked the speaker as an enemy of the state – both in Czechoslovakia, and also in America, where the military/industrial complex hummed merrily along at the behest of the Cold War mentality that I so desperately sought to at least balance by visiting places precisely like Prague.

I’d been to Prague before, but only briefly. My friend Barrie and I spent three days in Prague in 1987, fresh from the Soviet Union and Poland, and these hours were a whirlwind of beer consumption and subsequent forced marches to our assigned beds in an unfinished sports club seemingly halfway to Olomouc, leaving us little time to explore the city’s subtleties.

However, it was a joyous introduction to the Czech capital, where vast tracts of the urban landscape still had the appearance of the 18th and 19th centuries, and where small, winding streets led to dank basement pubs populated by working men conducting conversations in low voices, their remarks spices by clinking half-liter mugs of traditional draft pilsner-style lagers.

Prague in 1987: A formerly grand storefront on Wenceslas Square, which almost anywhere else in the world would have been occupied by a trendy designer shop  – and indeed again was after the Velvet Revolution – instead hosted the Automat Koruna, a stand-up eatery, dirty and dirt cheap, where half-liter mugs of local beer went four to a dollar, unless the money had been changed on the black market, which was dutifully manned by virtually every restaurant waiter in the city.

Then you got five, maybe even six.

Among my vague, alcohol-soaked recollections of 1987 is one in which Barrie and I were walking through a vast square with a large statue in the middle. Virtually every building in the square was cloaked entirely by impenetrable scaffolding, including at least two churches and the town hall.

Old Town Square was a reconstruction zone in 1987.

According to remarks on our tourist map, it was considered one of the most beautiful in Czechoslovakia, and perhaps in all of Europe, but it was impossible to make a sensible judgment of its merits given the area’s bandaged and mummified appearance.

Besides, owing to the sloth of Communism, the square probably had been under repair for decades, and would continue to be for decades to come. We forgot about it, and went off in search of another pub – perhaps the most beautiful in all Europe; who would know until it was visited?

More than once we came to the venerable Charles Bridge across the Vltava River, and all I could think about was the majestic “Vltava” section of Ma Vlast, the Czech national tone poem written by the beloved 19th-century composer Smetana, who is buried in the cemetery on the nearby Vyšehrad hilltop overlooking the river.

Barrie and I soon left town and resumed our journey westward. Time passed, and eventually I found myself in Europe for the third time.

Very little about Prague had changed when I returned in 1989; the city still seemed to be a time capsule in a myriad of senses, both good and bad, but when I returned to the Charles Bridge first thing and set my sights on the incomparable skyline of spires along the river, and the looming presence of the Prague Castle perched atop the opposite bank, the familiar soundtrack recording of Smetana’s “Vltava” refused to cue in my brain.

Instead of the expected soft rippling of orchestral strings imitating the flow of the river itself, I heard the slow tempo of a synthesized cadence, and the words and music of a slight pop ballad that might not have attracted my attention at all if not for the visual content of the accompanying video, which had played on MTV for months prior to my trip, compelling me to lecture innocent bystanders about the beauty of Prague.

“There, look!” I would drunkenly scream, pointing at the television while everyone else in the room melted away in search of phone books to read.

The song was “Never Tear Us Apart” by INXS, the band’s only #1 hit in the United States.

The video had been filmed in Prague some time during 1988, and it featured the late vocalist Michael Hutchence and his band mates in dark and serious poses that were meant to convey at least part of the city’s very real, cloaked and nervous Cold War feeling, beginning on the Charles Bridge, then down the street from the Jewish Cemetery, and finally ending with the camera at the corner of the glockenspiel on the Old Town Hall for an incredible closing pan of the fully renovated and stunningly beautiful Old Town Square, with nary a scaffold in sight.

They’d finished the renovation, after all.

Viewing the video today, it strikes me in much the same way as my first passport photo: Youthful, pretentious, and innocent (at least in relative terms) in roughly equal measure.

There was no deeply philosophical significance to any of it, and yet I could not extricate the sound and the sight of INXS’s creation from my mind as I walked the streets of Prague in the summer of 1989 – and I haven’t been able to avoid thinking about it since, although now Smetana’s tone poem has returned to its rightful place in the canon, and can again be summoned on demand.

Next: Pounding beers at the Automat Koruna, one of my favorite pubs (?) ever.


REWIND: Not Enough Time, Part One.