Miraculously, there has been two-way communication of the sort that always eludes Jeff Gahan’s bunker-bound City Hall team.

“Hi Roger – Thanks for your question. HWC did complete design work for this project, and the bike buffer was installed in accordance with the plans. I understand your concerns, and I appreciate you sharing them with us. We’re dedicated to completing this project successfully. We are currently working with the city of New Albany to determine the safest and most effective solution. I’d be happy to provide you with an update once more information becomes available. Thanks!”

And did the topic arise at yesterday’s morning’s BOW meeting? 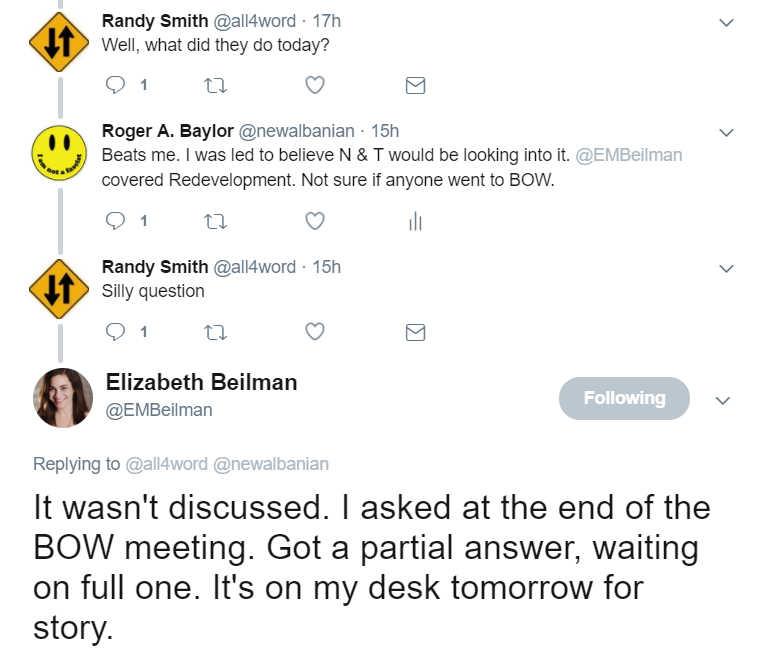 Those pretend-Democrats would sooner vote for Donald Trump — as most of them did.

HWC’s answer is cloaked in obscurantist bureaucratese, but it’s an answer. In “our-way-IS-the-highway” New Gahania, two-way conversation always is to be applauded.

Now, over to the blog’s junior editor, Jeff Gillenwater, whose Facebook comment excerpts from Friday characteristically summarize the situation.

It still blows me away that the single largest public works project in and around downtown New Albany in decades is happening in front of our house as I type and I (and everyone else) has to wait until they literally paint the lines on the street to know what it’s going to be. Everyone in city government involved in the plan – administration, council, board of public works, planning department, engineering – should be ashamed of themselves …

… Per my other post this morning, not voting for any of the minions currently involved. There’s not a currently sitting council member or administrative sycophant who’s deserving of public authority or money. I’ll actively campaign against any of them as necessary, using their own record …

… I was at the library earlier today and found the federally required environmental study for the street conversion– probably a hundred pages or so in a big, thick binder. Know what wasn’t included in all that (as legally mandated) publicly available information? A copy of the actual plan.

Of course, the “safest and most effective solution” might prove to be nothing at all, and replying to a Facebook question is a low bar, indeed. However, it’s a bar the city routinely trips over. Thanks to HWC for answering the damn question.