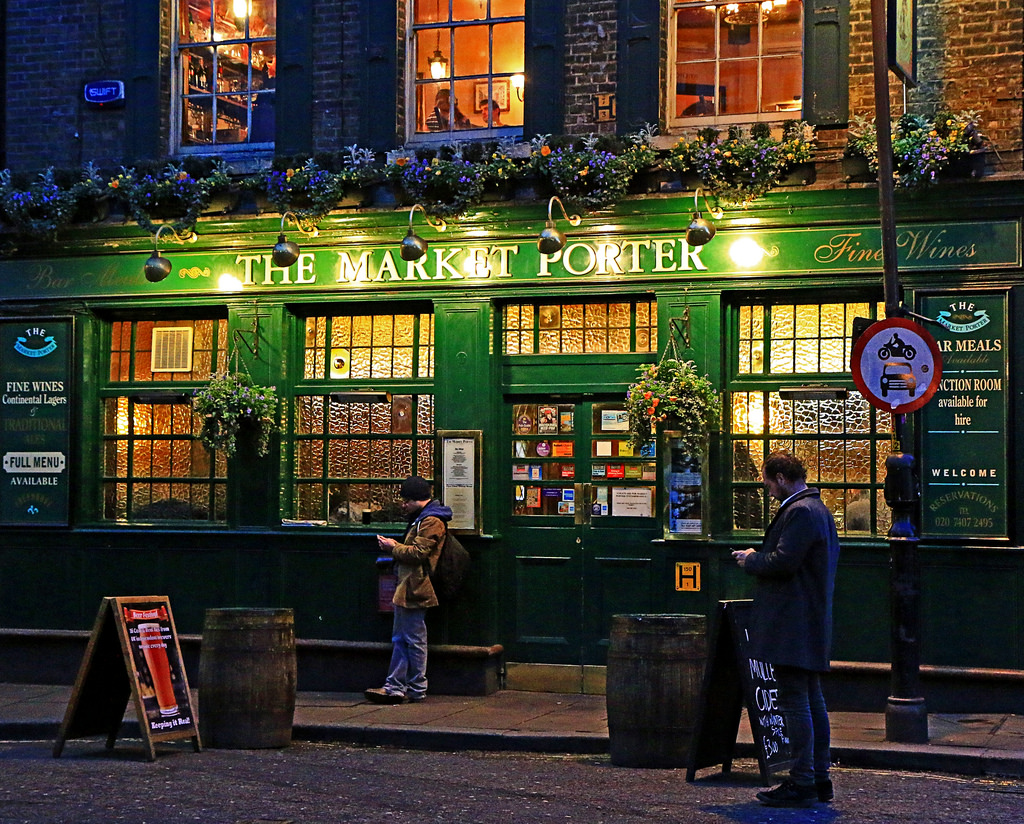 We could stay up drinking until morning, all the while arguing about the differences (if any) between Porter and Stout, but the only point of agreement might be this.

Entire quickly became popular as the workingman’s pint of choice, and as several historians seem to think, became known as “porter” because it was a particular favorite of the porters who labored at the local markets and also delivered the product to the pubs.

Historically, a porter is a person employed to carry burdens, as at a market. In the UK, what makes a “market pub” noteworthy is its exception with respect to allowable opening hours.

In Indiana, the rules are uniformly favorable. Any bar can be a “market bar,” though not many do.

Markets and their laboring porters. Porter as an ale brewed by the likes of George Washington. New Albany once had a market on … Market Street.

What a great pub name: The Market Porter.

Pints at dawn: is this last call for London’s market pubs? by Jessica Furseth (The Guardian)

Only a few pubs are still open to workers first thing in the morning – a throwback to when markets were vital to inner city life. Now these traditional early houses are being kept alive by a different type of drinker

… Four men are sat by the front door, getting a couple of pints before heading home to Southampton after a 12 hour shift on the nearby Crossrail construction. “A few of us try and come here once a week. This place is great for people like us, it’s our evening,” says Steve Webb, one of the workers.

Early houses came about due to a quirk in Britain’s alcohol licensing laws. Historically, all pubs would serve from first light, before this was stopped in the first world war because it was seen to hamper the war effort. But an exception was made for market pubs.

“Market business was often conducted in the pub. You’d go have a look at someone’s cattle or sheep, and then go into the pub and strike the deal with a drink,” says Martyn Cornell, a historian specialising in beer. “It was almost a commercial necessity to keep these places open, so market business could be carried out.”