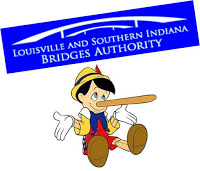 I’ll lead with Aaron Renn’s answer to a question asked in the comments section.

The toll revenue from the system is being split 50/50 between Indiana and Kentucky. Previous analysis indicated that 80% of the tolls will be paid by Indiana residents, so that’s who is paying for the project, ultimately.

One Southern Indiana is delighted. Evidently not a single humanities major was consulted.

The initial figures are in and the new Louisville bridges are on track to be as big a failure as predicted.