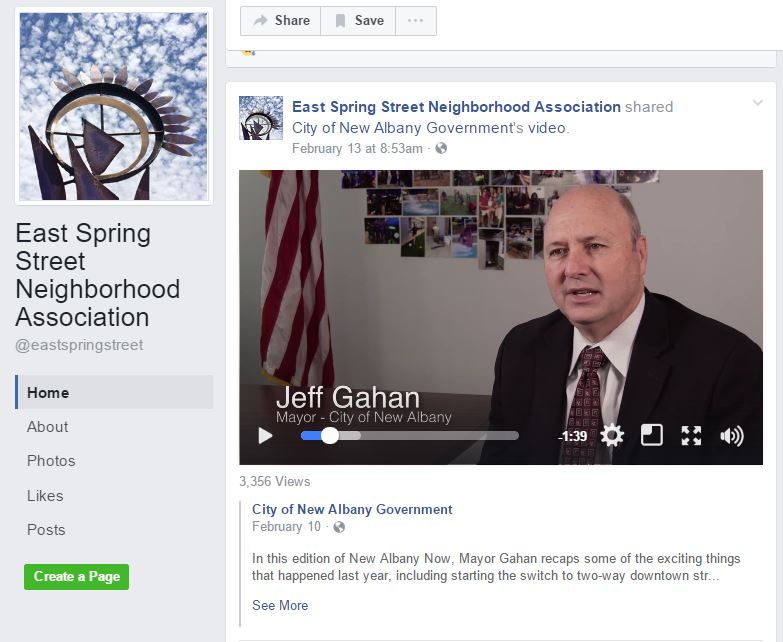 It started me thinking about a brief period when the idea almost seemed to make sense, before self-interest and inertia set in. Is the notion of neighborhood associations again viable? I’d like to think it is, but history doesn’t support optimism.

As it had tended to be from its inception, ESNA was more of a “suburban sensibility meets historic district gentrification” sort of entity, while SEJ had the makings of genuine progressivism, and benefited from the input of Ted Fulmore, who actually was a student of urbanist principles.

The idea arose to merge these two groups, so as to achieve a better economy of scale given the relatively small urban area at stake. In retrospect, it turned into a culture clash, one I should have seen coming but didn’t at the time.

However, this story “woke” me, and has informed my thinking about neighborhood matters to the present day. Here’s how it played out, in chronological order.

The ups and downs of “Midtown,” tonight.

If you’re already interested in this topic, you probably know about it. Just in case, here’s notification of tonight’s joint neighborhood association meeting:

Purpose:
Discussion (pros and cons) of rebranding the neighborhoods as “Midtown,” and the potential merger of the two neighborhood associations

Where:
St. John Presbyterian, 13th and Elm Street (use the 13th Street entrance)

For the searchable record, newspaper coverage of what should be a no-brainer.

If a decision is made to merge, the association could be called Midtown, though a name to better historically represent the areas could be chosen.

Note that I qualified this by inserting the word “should” in the opening sentence. My household supports the idea, primarily because it stands to terrify the city’s Luddites.

The respective groups will vote at their meetings in July.

ESNA meeting tonight: Merger with SEJ to be discussed and a vote taken.

I regret being unable to attend tonight owing to the resumption of my IUS beer class at precisely the same time. I’ll say this: Neighborhood involvement is good irrespective of the season, but the merger question is of potential impact, so if you’re a member (or want to be), come out, pay your dues, discuss, and vote.

Vote on merger by ballot

An e-mail from Greg Roberts (ESNA)

The discussion was had and might I say, it was a very good discussion with a lot thoughts and feelings aired. The vote was taken with 8 voting for merger and 2 against. Now we look to the future for new and exciting adventures. I think the following quote sums up the meeting last night, “Change is the essence of life. Be willing to surrender what you are for what you could become.” Unknown.

Recently when I referred to the proposed merger of the East Spring Street and S. Ellen Jones neighborhood associations, my use of the word “Luddite” was misinterpreted in some places.

My household supports the idea, primarily because it stands to terrify the city’s Luddites.

Had I written, “terrify the city’s Erikas,” perhaps the meaning would have been clearer. There is nothing more disconcerting to the lone wolf obstructionist than strength in principled unity. I’m genuinely sorry if this shading wasn’t clear at the time.

At any rate, ESNA approved the merger, and tonight S. Ellen Jones will vote. Here’s the meeting preview.

Agenda topics to include (but not limited to):

1. Repair Affair Team: Review of Project (Scheduled to be complete on 7/18). View photographs at this link.

2. Merger Vote* – Vote to determine if we should move forward with merger proposal with East Spring Street Neighborhood Association. ESNA voted to proceed on 7/8. If vote is “Yes” by SEJ, Transition Team will be formed.

3. Festival Planning – Update on planning and confirmed participants. Festival is Saturday August 15 – 11am to 3pm.

If you have additional agenda topics to include, please forward to me.

ESNA meeting tonight: Merger with SEJ to be discussed and a vote taken.

From last evening’s ESNA meeting comes word via e-mail that, “Some members expressed reservations about proceeding with the merger.”

For some reason, I’m reminded of those locals who oppose reopening the K & I bridge, reasoning that those evil Portlanders would soon come streaming across to New Albany.

Of course, the Portlanders harbor a polar opposite concern.

When times get tough, we forget the reasons why we won the Second World War. That’s too bad, because speaking personally, and in both word and deed, I support maximum unity in the city’s neighborhoods, because combining resources and concentrating efforts are the only ways to even begin checking the rot and reversing the negligence wrought by two terms of Brother Price’s Traveling Deprivation Show.

Just my opinion. I’m sure there are others.

“It was in fact a memorable meeting. However, I do not have the same attitude toward the merger. I applaud those who are rejoicing in this merger. Sorry, I’m not. I am a firm believer that if it ain’t broke, don’t fix it. I did not see the ESNA as being broke, but there were those who apparently did and they have won the battle. I guess I was just one of those narrow minded people who were the ESNA. I was proud of the ESNA. It had clout and got things accomplished. As holder of the archive information for the ESNA, it is a shame. I look through all the newspaper articles, pictures, and certificates and realize it is all gone. All down the drain. Just a thing of the past. Everything the ESNA stood for is now gone. I know for a fact, I did my share for the ESNA and everything it worked for. Everything we worked so hard to establish is now being handed. over to others who wanted no part in the ESNA. I will not be taking part after the ESNA ceases to exist. I hope you all prove me wrong.”

The combined organization will preserve and enhance the individual identities of the many smaller neighborhoods within its boundaries, and its increased clout should be useful in influencing policy. I have long been a supporter of New Albany’s neighborhoods, and I’ll be looking for opportunities to continue that support from the Statehouse.

(A year passed before the topic was mentioned at NAC. This was a time of much stress in my working world, which may account for the detachment. It is my recollection that the ESNA brain trust — having agreed to a merger with Midtown, but with certain “key” members unhappy — chose to overlook the results of the merger vote and remain autonomous. This conclusion is borne out by the wording in the image.) 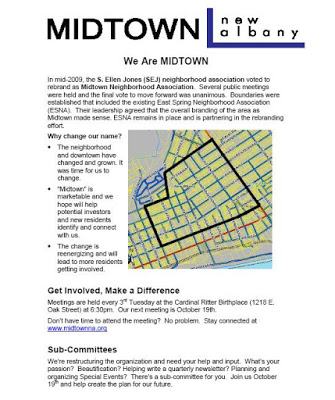 (At this point, the trail gets cold. In the aftermath of ESNA’s prevaricating merger reversal, the Confidentials became disillusioned, as the association seemed more intent on preserving its social insularity than taking it to the streets. Obviously, the merger was unceremoniously ditched. My next blog mention of ESNA in any capacity came on April 18, 2013, although there are several blog references to Midtown Neighborhood Association activities in 2011, and we attended more than one meeting at the Ritter House. In 2012, it became moot.)

I’m sending this note to those that live in the neighborhood and others who are active in the area. I’ve been engaged in community activities basically since the day I moved here almost 10 years ago. My primary role has been to provide leadership as neighborhood president. I’m going to be stepping down from this role over the next month. The Midtown meeting on Tuesday, April 17 will be the last one I preside over.

The Midtown Neighborhood Association did not survive Ted’s departure. I’ve always appreciated what he tried to do in the teeth of apathy and open opposition. It was herculean.

Beginning in 2015 or thereabouts, I tried to reconnect with the East Spring Street Neighborhood Association, but have learned (sadly though not unexpectedly) that the organization remains cliquish and suspicious of interaction and dialogue. No back-and-forth communication is allowed at the Facebook page, and e-mail notifications seem to emanate on whim. Heaven forbid a discussion break out.

Obviously, ESNA’s digression was hastened when Greg Phipps was elected to the 3rd district council seat in 2011, and in effect, the association has become something of a neighborhood campaign committee tied to Phipps — and hence, directly to Jeff Gahan, Phipps’ flawless political patron.

The Comprehensive Plan contains sterling language about the importance of neighborhood associations, but for so long as a top-down bunker mentality reigns, it’s unlikely to come to anything.

The concept makes sense only as a grassroots efforts, and grassroots efforts are not exercises in closed clannishness. Neighborhood associations cannot serve as de facto bunco clubs. There’s more to them than that, and yet in New Albany, patronage politics inevitably usurp grassroots content, as ESNA’s recent experience has amply illustrated.

The irony of all this, taken in light of our current vantage point amid the Chronicles of New Gahania, is that if we’re completely fair and unbiased in the assessment, the most highly functional neighborhood association in the entire city is the New Albany Housing Authority.

And who want to demolish NAHA?

Phipps and Gahan, that’s who.