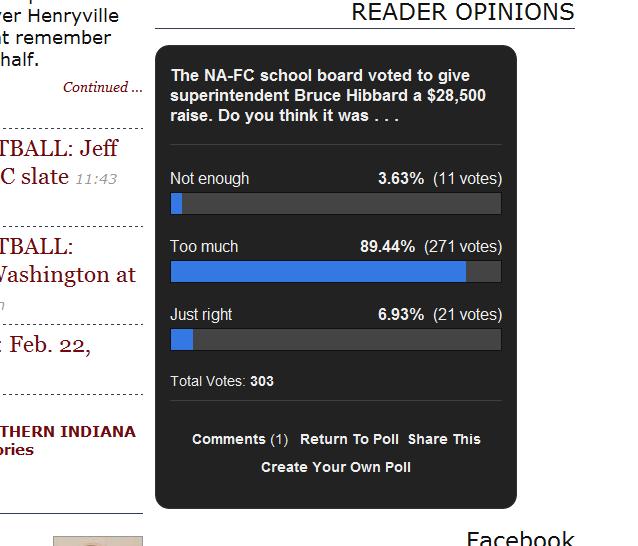 On Monday afternoon, we were feeling a bit baffled by weird Democratic Party smoke signals.

We think this means Dickey wants Gahan’s bedmate Hibbard to keep his job, but it’s such bad writing that it’s hard to tell.

On Monday evening, I started a discussion thread at Facebook.

Earlier today, the NAFC school board voted unanimously to “not let superintendent Bruce Hibbard’s contract roll over after it expires in July 2018.” He may or may not be retained by the board, but the vote is being interpreted (fairly or otherwise) as fait accompli that Hibbard’s a goner. According to John Boyle of the News and Tribune, principals in attendance stood in support of Hibbard. The Floyd County Democratic Party was evasive as usual, but seemed to be suggesting solidarity with Hibbard, and at Twitter, a city employee wrote, “The NAFC School Board should be ashamed of themselves if for no other reason than the fact that they’re willful morons.” The passion puzzles me, so weigh in, Floyd Countians; make the arguments and educate me. What am I missing? Yea or Nay on today’s action, and should Hibbard remain as superintendent? Thank you.

Go there to read what was said. Meanwhile, here is newspaper coverage.

NEW ALBANY — In front of a room packed with community members and school officials, the New Albany-Floyd County school board unanimously decided Monday to remove the rollover option from Superintendent Bruce Hibbard’s contract.

Had the board not notified Hibbard of a decision regarding the rollover clause by June 30, his contract would have automatically extended for another year on July 1, 2018. His contract is now set to expire on that day rather than roll over.