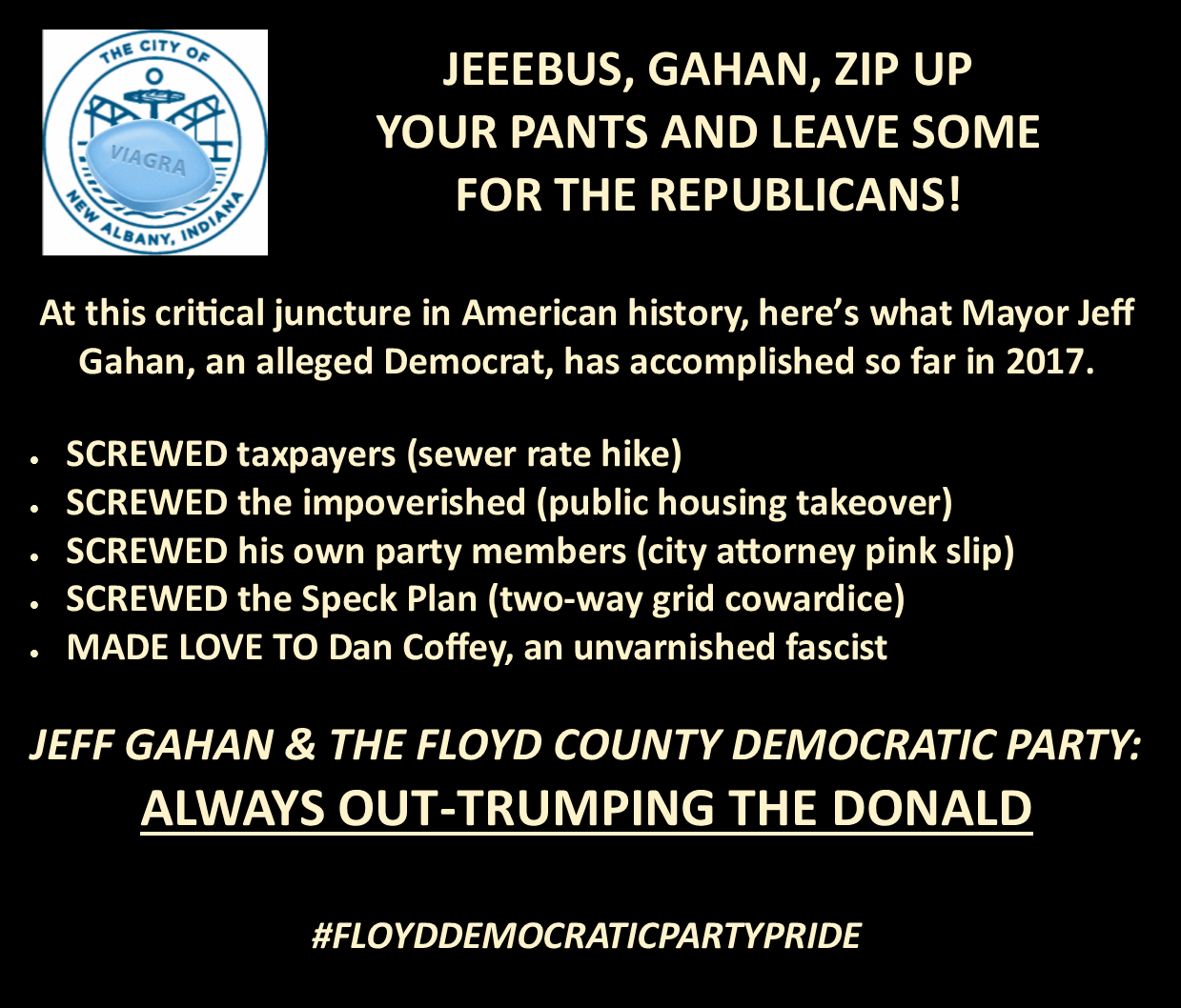 The Nation and Elle, right there on the front lines … and back here in Floyd County, we have Jeff Gahan and Adam Dickey, doing the work of good Republicans, while perpetuating the same old monetization-based exclusion of ideas that cost Democrats last fall’s election in the first place.

Let’s summarize 2017 with a Gahan and Floyd Democratic Party meme and a few essential links.

Why We Support Keith Ellison for DNC Chair (The Nation)

He will address the party’s—and the nation’s—crisis by aligning Democrats more closely with movements for social and economic justice.

… The Nation enthusiastically endorses Ellison in the contest to lead a DNC that must repurpose itself in order to derail Trump, while at the same time speaking to young voters who won’t settle for anything less than an aggressively progressive opposition party. The job of DNC chair is to build a party that can win elections on every ballot line and in every state. But in an age when party loyalties are weakening, and when movements matter more to tens of millions of Americans than partisan labels, Ellison is ready to build an activist party. In fact, the high-energy congressman (who says he’ll quit his House seat if he wins the DNC post) is already doing that: calling for mass rallies to oppose Trump’s Muslim ban, taking part in those rallies, and then appearing on the Sunday-morning talk shows to rip discriminatory policies as un-American …

… What distinguishes Keith Ellison is his experience as a progressive who has won and won and won again—and who knows that Democrats can turn red states blue by transforming their party into a movement.

Rep. Keith Ellison on What the Democratic Party Needs to do Right Now, by Melissa Harris-Perry

… It is hard to imagine an entity in American politics more irrelevant right now than the Democratic Party. This is why the decision that the 447-member body of the Democratic National Committee will make when it meets in Atlanta on February 25to choose its next national party leader is crucial. Officially it is a crowded field of contenders, but in reality a two-man race. One frontrunner is former Obama Labor Secretary Tom Perez who earned the backing of Vice President Joe Biden on Wednesday. Perez is well known and well liked among the existing party leaders. He is a known quantity likely to pursue a strategy very similar to the status quo.

The other front running candidate is Representative Keith Ellison of Minnesota. Representative Ellison was elected to the 5th district of Minnesota in 2006. Minnesota’s 5th district includes Minneapolis and its suburbs, where immigration, growing racial diversity, class identity, and concerns about economic security mirror those animating current national anxieties. Ellison was the first Muslim and the first African American from the state of Minnesota elected to the U.S. Congress. If he is chosen to lead the DNC, it will likely represent a substantial change in direction for the national party.