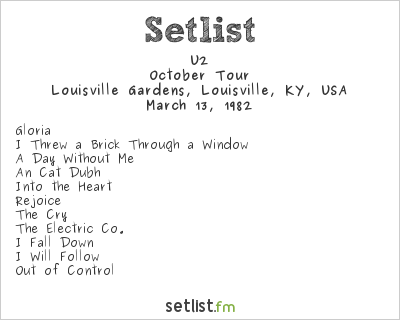 It stands to reason that this U2 clip from Werchter (Belgium) in July of 1982 would be familiar to anyone who saw the band in Louisville at the old Louisville Gardens just a few months before. I wasn’t among them; the band only came to my attention with the release of War the following year.

35 years later, Jeffrey Lee Puckett picks up the story at the Courier-Journal.

U2’s June 16 show at Papa John’s Cardinal Stadium will mark only the second time the band has performed in Louisville, and you’re forgiven if you can’t remember the first.

That was March 3, 1982, and one of history’s most iconic rock acts was just getting its start in America and opening at Louisville Gardens for the J. Geils Band, then riding a huge wave of popularity thanks to its “Freeze Frame” album.

Bono “bounded around the stage like a pinball on acid,” according to the Courier-Journal’s Michael Quinlan …

When U2 next returned to Kentucky, the band was a certified international phenomenon. On October 23, 1987, U2 performed at Rupp Arena in Lexington during the second leg of the Joshua Tree tour.

I didn’t attend U2’s second Kentucky show, either, but this time there was a better excuse: I’d already seen them play in Cork, Ireland just prior to this, on August 8. Barrie Ottersbach and I were there at the Páirc Uí Chaoimh, having spent a glorious summer day draining pints of Murphy’s Stout and watching the young kids vomiting from too much hard cider intake.

My only regret is not realizing the Dubliners were the first of three bands opening for U2; consequently, we took our seats just as UB40 was starting. Here’s the set list from that sadly distant day.

Stand By Me (Ben E. King cover)
C’mon Everybody (Eddie Cochran cover) (last performance ever)
I Will Follow
Trip Through Your Wires
I Still Haven’t Found What I’m Looking For (with ‘Exodus’ snippet)
MLK
The Unforgettable Fire
Exit (with Van Morrison’s ‘Gloria’ snippet)
In God’s Country
Sunday Bloody Sunday
People Get Ready (The Impressions cover)
Help! (The Beatles cover)
Bad (with ‘Walk on the Wild Side’ snippet)
October
New Year’s Day
Pride (In the Name of Love)

Encore:
Bullet the Blue Sky
Running to Stand Still
With or Without You (with ‘Shine Like Stars’ coda)
Trash, Trampoline and the Party Girl
Out of Control (tour debut)
40

It never dawned on me until now that there might be video and audio bootlegs of U2 playing live in Cork at Páirc Uí Chaoimh on August 8, 1987. But of course there are. Here is an excerpt.

A month or so after seeing U2 in Cork, I set foot in Sportstime Pizza for the very first time, unaware that by doing so, the next thirty years of my existence were being presaged. It’s almost exactly a half-a-lifetime ago since Cork, and that’s scary.

I’m admittedly a huge fan of U2, and we’ll be there at ridiculous expense at Papa John’s Cardinal Stadium in June. I haven’t seen the band live since 2002, indoors in Indianapolis — between Cork and Indy was a show in Prague during the Pop Mart Tour in 1997.

The members of U2 are my age, and their journey always has been a source of fascination to me. In this fractured world of increasingly brief attention spans, U2 currently seems almost as unfashionable as Phil Collins (unfairly in both instances, I think), and yet the band also is among the last of the rock and roll dinosaurs able to sell out stadiums, albeit on the strength of rock anthems from the past, reminding us that the era of such songs uniting audiences is finished.

I lament their passing. There were many indefensible aspects of human life in 1987, but as Barrie and I watched the stage being set for U2 in Cork 30 years ago, the volume on the PA suddenly went up. Beatles songs began playing, and as though it were the national anthem, everyone stood and began singing along. We joined in.

If we’ve evolved past this point of communal communion, too damned bad for us.