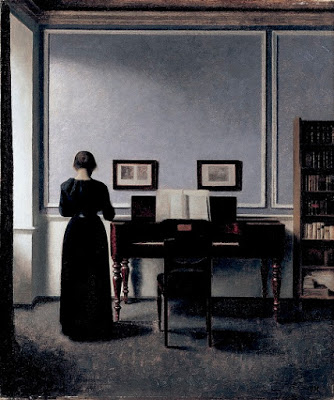 The documentary is called “Michael Palin and the Mystery of Hammershoi” (2005), more specifically Vilhelm Hammershøi, and while I’ve learned a lot about Denmark since befriending Kim, Kim and Allan, this artist had remained completely unknown to me until watching the film.

Palin tries mightily to get inside the artist’s head and learn what made him tick, but a century later, evidence remains elusive. The conclusion? Sometimes things just are. Palin’s valedictory words are very moving to me.

“He was an artist. He made paintings. The rest is silence.”

‘A heady fusion of Hopper and Vermeer’, by Michael Palin

… I don’t think Hammershoi would have liked the confessional times we live in now, when a desire for privacy is considered suspect and appreciation of any work of art seems to depend on how much we know about the artist’s personal life. He left us his quirky, innovative paintings and I think he intended them to say everything about himself that he wanted the world to know.