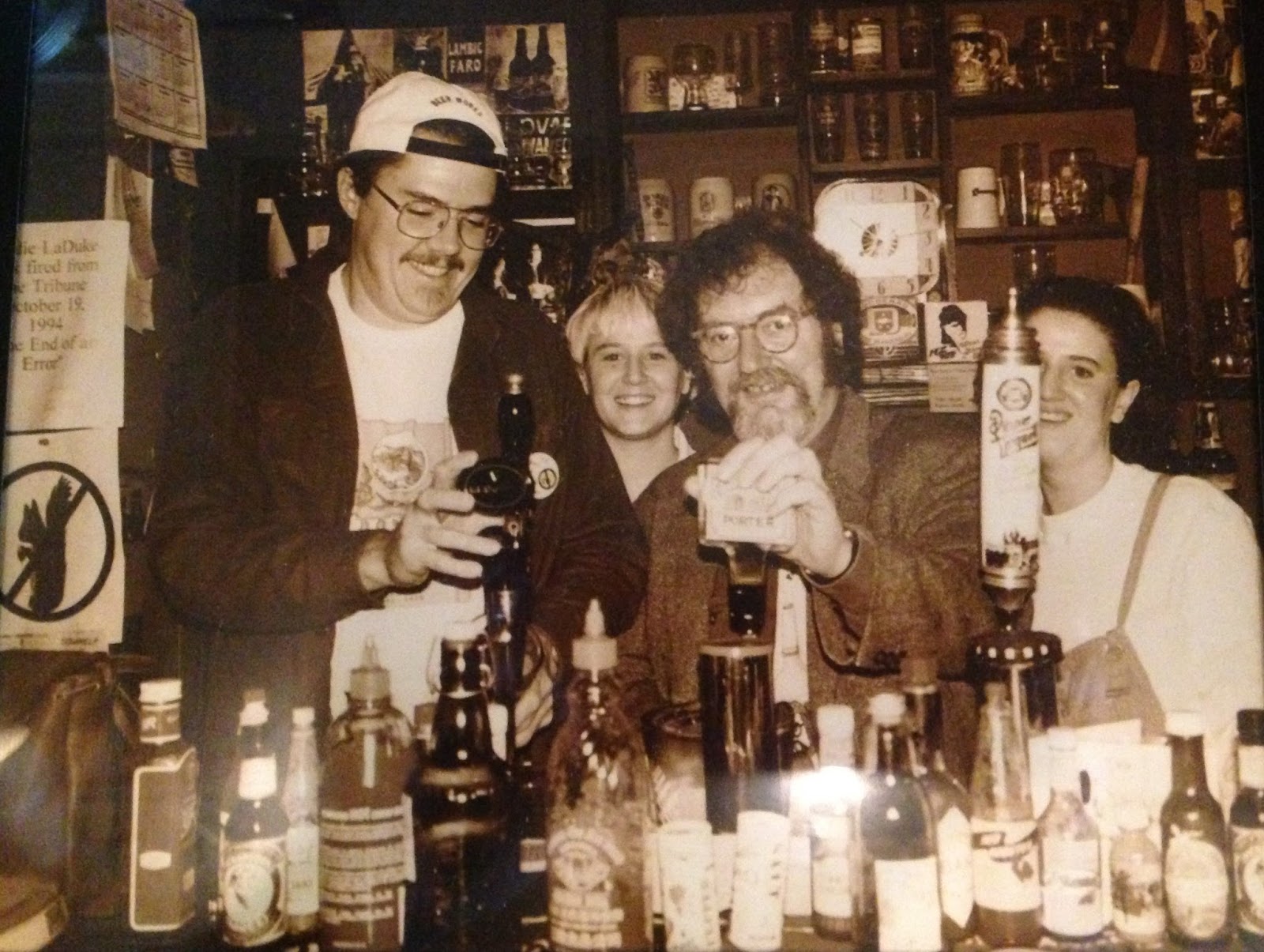 Ironically, given the book’s influence on me, I seem to have lost my copy of it. But no matter. As the years pass, it’s ever clearer to me that Michael Jackson’s World Guide to Beer perfectly captured the beer world at a crossroads between old and new.

Furthermore, having been inspired by the text, I had the first-hand opportunity to experience the historic European side of this tableau before modernity began to alter it irrevocably, then to apply all these lessons at my own pub to what became the American beer renaissance.

I’ve been very fortunate in these instances, and I was even more fortunate to meet the man himself.

By the start of 1977, Michael Jackson was a mildly successful, 34-year-old newspaper and television journalist whose biggest coups to date were editing the in-flight magazine of Dutch airline KLM and filling in for another writer on a 1976 book called The English Pub (the photo-heavy affair covered exactly what its title implied).

Jackson would exit 1977 as the leading authority on beer in the English-speaking world, maybe the whole world. For it was during that year that publishers Prentice-Hall and Littlehampton Books Services released his World Guide to Beer in the U.S. and the U.K., respectively. It was a groundbreaker in terms of explaining and popularizing beer.

This essay first appeared a few years ago at LouisvilleBeer.com, which appears to have become moribund. That’s too bad, though as we’re learning on an hourly basis in 2017, change is the only genuine constant. If you’ve read this piece previously, persevere, because there’s a twist to the reprint.

Jackson, Louisville, and the Color Red.

Michael Jackson unexpectedly visited the former Rich O’s Public House in November, 1994, a tad more than two years after we opened. If I hadn’t been drinking for much of the same day, tagging along with David Pierce as the Beer Hunter made pre-arranged appearances at Bluegrass Brewing Company and the now defunct Silo, I’d have been far too nervous to properly function as host.

I’ll be forever grateful that Jackson consented to accompany our ragged band of awed and inebriated fledgling beer enthusiasts on yet another beer hunt, this one at 9:00 p.m., from downtown Louisville across the Ohio River to an embarrassingly unfinished strip mall space that at the time could offer only three beers on tap.

Moreover, knowing that most of the regulars would be following Jackson through Louisville, we’d closed the pub for the day. Minutes ahead of the approaching motorcade, there was barely enough time to dash inside, flick light switches, sweep up and make the barroom somewhat presentable.

Coming on the heels of a long day of one-ounce samples, Jackson proceeded to order and consume a full 20-oz Imperial pint of Sierra Nevada Porter, and upon departure an hour and a half later, made this wry observation:

“I’ve been to many pubs in America, and I’ve never seen one quite like this.”

I’ll say it again: It is impossible to overstate the influence that Michael Jackson had on thousands upon thousands of beer drinkers, who continue to find in his elegant and precise prose a purposeful rationale for their pursuit of the perfect pint.

Some describe Jackson as comparable to William Shakespeare in terms of reach and pervasiveness. To me, far more flattering is the suggestion that he is the beer world’s Samuel Johnson, the 18th-century English essayist who established expository norms for non-fiction and wrote a dictionary of the English language. 150 years later, Jackson synthesized Johnson’s style and words and did the same for the language and vocabulary of beer.

Jackson did not invent the notion of beer styles, but he introduced them for the consideration of a bland lager-soaked planet, though it is Jackson’s association of beer with place that survives as the finest representation of his genius. Those 20th-century industrial monoliths complexes may have stolen beer from its traditional point of localized orientation, but Jackson stole it back — first a little, and then a lot.

Jackson generally refrained from writing about technical brewing details, possessing instead an intuitive ability to filter hyperbole of the sort favored by marketers, and to viscerally reconnect beer to its “terroir” in terms of physical geography, human culture and social conditions. He did so factually, wittily, majestically, and always with supreme lyricism.

A few years after Michael Jackson’s nocturnal pub visit, I was in Denver for the Great American Beer Festival. A few samples under my belt, I was loitering somewhere on the mezzanine, leaning against a vacant table and chatting with the beer writer Stan Hieronymus, who suddenly asked me if I had brought a book for signing. With my face registering cluelessness, he motioned behind me – and there was Jackson, settling in for another afternoon with his reading public.

Completely by accident, there I was at the head of a gradually lengthening line, and without a book to have autographed. However, I had a GABF program tucked under one arm, and it was duly proffered to Jackson as I reintroduced myself and asked if he remembered the Public House. He smiled in affirmation, adding that the FOSSILS newsletters being sent to him in London were entertaining.

“You’re quite the polemicist,” said Jackson.

I blushed crimson as Jackson pushed away the program and said, “Have I told you why your Red Room made such an impression on me?”

It surprised me that Jackson even noticed the Red Room, which had only recently come into being when he visited. It was (and remains) a small seating area at the pub, with one wall painted red and a massive three-part Soviet-era poster of Vladimir Ilyich Lenin on the wall, since augmented with other examples of Communist paraphernalia. 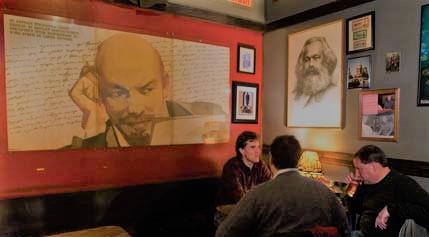 Jackson put down his pen and began telling the story.

It began in 1945 with his earliest childhood memory at the age of three: The post-war British election campaign that ended in Labour’s sweeping victory and Winston Churchill’s fall. Jackson’s father, whom he described as the family’s main political agitator, was at work, and so his mother – normally apolitical – took young Michael to a rally for their Yorkshire constituency’s Labour candidate, an erstwhile journalist who was an unapologetic Socialist.

Jackson never forgot the rally’s uniformly red buntings and campaign banners. The candidate handily won the seat and began a long and distinguished career in Parliament, so long that after the adult Jackson graduated from university in the mid-1960’s and began his own journalistic career, the same politician still held the seat he’d won in 1945.

Jackson was assigned to interview the aging MP, and he learned that the politician had lived in America prior to the second war, and had worked for …

By now I was becoming uncomfortably cognizant of a horde queued behind me. What newspaper in Louisville would fit Jackson’s description? He tried his best to jog my memory.

“The newspaper’s owners were wealthy liberals,” he said, “and they sold the paper to a huge media company.”

I blurted out: “The Binghams? The Courier-Journal?” Jackson came up out of his chair.

“Yes! The Courier-Journal, the Binghams – that’s it!”

And so it was that the member of parliament – the man whose campaign rally had been burned into Jackson’s memory by virtue of the color red – also had worked for the Louisville Courier-Journal. He had spoken of Louisville when interviewed by Jackson so many years before, and this was the cognitive impetus for Jackson’s reaction when he walked into our pub in 1994.

Red Room, geography, colors, politics and beer … all combining to make dozens of other beer lovers grudgingly wait their turns while the dots were connected for my sole benefit by the world’s greatest beer writer … well, I’ll remember these moments until the day I join Jackson at the celestial tap room, when I intend to ask the one question that most needs answering:

What was the journalist/politician’s name?*

I was lucky to chat with Michael Jackson twice more before his death in 2007, and while there’ll be no return visit to Louisville, it seems to me that in 1994, he gave the city’s re-emerging beer scene his seal of approval.

* In January 2017, I finally got busy and compared notes on Jackson’s childhood in Yorkshire with a list of parliamentary constituencies there and the results of the 1945 election, and the journalist/politician whose name I’d forgotten almost certainly was J. P. W. “Curly” Mallalieu, profiled here and here. The Courier-Journal isn’t mentioned, but the Lexington Leader is. I’ll have to think of a different celestial tap room query …