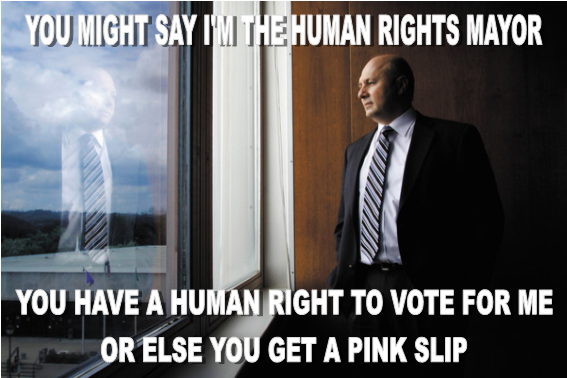 I won’t go into the lengthy and exceedingly futile history of the HRC’s most recent incarnation, though almost exactly five years ago, we thanked Phipps for taking an interest.

Kudos to CM Phipps for making the Human Rights Commission’s revival a priority.

Subsequently, perhaps no other single topic better illustrates the doctrine of Civic Gahanism than the history of our reconstituted Human Rights Commission:


Fundamental change is imperative, so long as nothing fundamentally changes.

It was never Jeff Gahan’s idea to enable a human rights commission, but in the grand scheme of political maneuvering, there was sufficient support that he acquiesced, pausing only to be assured that he’d receive credit for the sham he at first opposed, and would extract payback chits from those duly assuaged, redeemable for bonded boondoggles down the road.

Consequently, New Albany was gifted with vintage Gahan intellectual infrastructure: An entity neutered and defanged at birth, suitable primarily for posturing and press releases. The sycophants were delighted, and so little of merit occurred (for once, actually by design) that a whole other entity (Southern Indiana Equality) was privately created.

If you can find anything in this story to suggest a vote to re-elect Jeff Gahan, please let me know. While you’re pondering this, consider yet again the “human rights mayor’s” abysmal record in matters such as … well, human rights.

Often in these pages, we advocate the notion of progress by design, and since 2012, New Albany has possessed a reconstituted Human Rights Commission. Since it was formed again and duly stocked with appointees, it has had very little to do, not because New Albany is a fundamentally functional utopia of tolerance and good sense, but because City Hall’s evident design for the HRC has been that it remain unused — reserved for show and public relations pronouncements, while kept hermetically sealed and out of controversy’s way.

This has disgusted me from day one, and continues to do so. It implies that “quality of life” derives solely from capital intensive building projects, and has nothing to do with fundamental human dignity. It is both cynical and cowardly to first enable a Human Rights Commission, then render it caged and impotent.

My most recent reprinting of the following column on the topic of the Human Rights Commission was on March 21, 2011. The column itself was written in 2009. Ironically, as I read the final paragraphs, there is considerable irony. We certainly did determine that the members of New Albany’s political class could vote “for” something.

The HRC was reformed, then immediately stripped of working parts and left to rest atop blocks in City Hall’s dustiest file cabinet. This was fine with the mayor, who never wanted it to be viable, anyway, and was perfectly content to accept the plaudits for a commitment to human rights that he doesn’t possess in any discernible way, shape or form.

If Gahan, a self-described Democrat, did in fact possess such a commitment to human rights, chances are he wouldn’t be telling people that the best solution to the housing “project” is to demolish it and ship housing authority residents to the county somewhere, perhaps in tent camps, as though he were speaking of toxic waste or cordwood and not human beings.

But in the end, the saddest cut of all is that Phipps, who has danced the limbo to Adam Dickey’s increasingly discordant Democratic tune, went along with this shell game from the very start, garnering his own participation trophies and gold stars, and accepting a non-functional Potemkin facade of an institution as quid pro quo for rubber-stamping every one of Gahan’s TIF bond and “quality of life” over-expenditures that crossed his desk.

Gahan’s done nothing for Phipps. Neither has the Democratic Party. Perhaps independence is the only true way for a New Albanian to preserve even a semblance of integrity amid the chicanery, dullness and corruption taken for granted by the big fish here in this tiny bird feeder of a town.

However, the HRC was by no means the evening’s main story line. I’ll be back tomorrow with evidence of the reeking cesspool’s stench marking the spot where the Floyd County Democratic Party used to stand.

Because: Dan Coffey has named his price to lend the mayor his council swing vote, and the only question is who must be disemboweled to provide the Copperhead with his snack.