Around this time each week, anguished wails begin seeping out of the bunker’s ventilation ducts: Why all these newfangled words?

Why not the old, familiar, comforting words, the ones that sufficed during the glory days, in those simpler times before inexplicably naked greed kicked in like a bond-issue-percentage speedball, knocking you back into the turnbuckles but feeling oh so fine, and now, as the Great Elongated and Exasperated Obfuscator of comic book series fame (can Disney World be far behind?) you teach detailed principles of banking to bankers, at least when not otherwise occupied making healthy deposits into your own account?

Thankfully, even if one toils for the Peerless Leader (not to mention Peerless Faucet), a healthy vocabulary isn’t about intimidation through erudition. No, not at all. Rather, it’s about selecting the right word and using it correctly, whatever one’s pay grade or station in life.

Even municipal corporate attorneys reaping handsome remuneration to suppress information and to squelch community dialogue can benefit from this enlightening expansion of personal horizons, and really, as we contemplate CPIs, IUDs and IOUs, all we really have is time — and the opportunity to learn something, if we’re so inclined.

This weeks words are familiar, with a chronological twist: New Albanian.

1. of or relating to New Albany (as opposed to Old Albania, otherwise known as Shqipëri/Shqipëria), its inhabitants, or their psychology

2. a native or citizen of New Albany

For a very long time, we’ve been speculating as to exactly when New Albanian first was used as a descriptive term.

I’ve never been shy about my own recent part in popularizing the usage of New Albanian, which became the name of my business in 1994, but was used informally prior to the advent of the company name, often when we’d hoist steins while trying to answer the question, “What is a person from New Albany called?”

“New Albanyite” never seemed right, and New Albanian always was the logical choice. For so long as historical evidence was scant, I was delighted to claim credit, but today, thanks to local physician and city council member Al Knable, there is definitive proof that the use of the term New Albanian to describe a resident of this city extends at least as far back into the life and times of the settlement on the flood plain as the Eclipse of 1869. 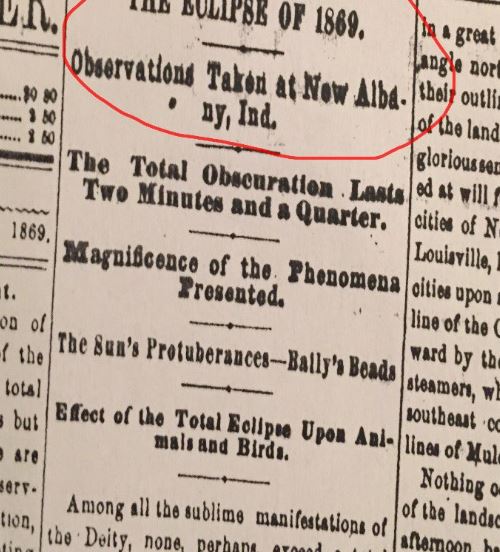 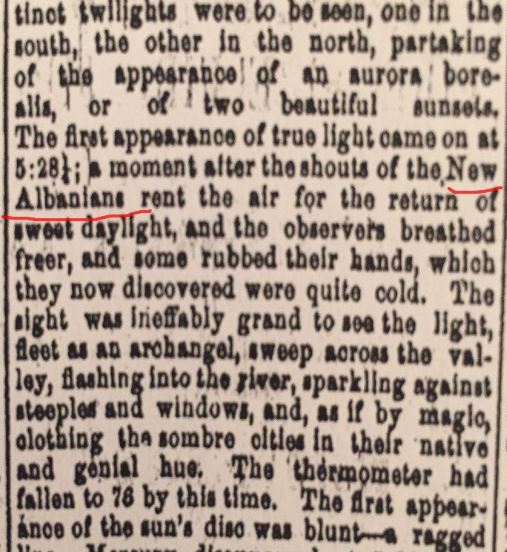 It’s from the Ledger, a Tribune forerunner. Note the multi-syllable words used in the header, among them obscuration, magnificence, manifestation and protuberances. If cannot be imagined that a newspaper editor today would view these words in any way apart from sheer unmitigated horror. In fact, the News and Tribune recoils in just such a manner, daily.

Thanks to Dr. Knable for making this major etymological contribution to our understanding of the city’s history.