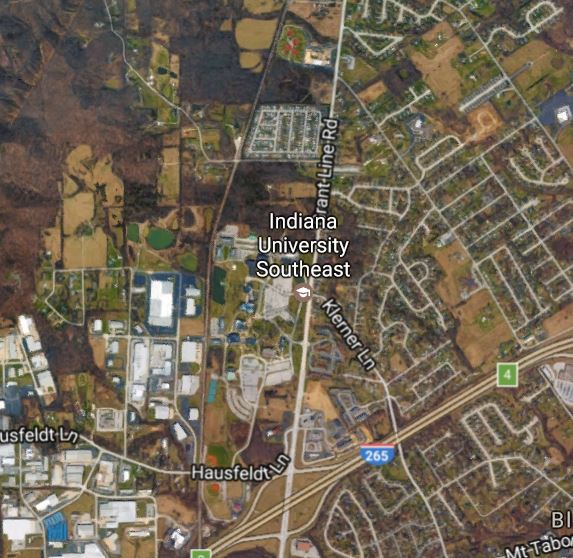 To repeat: I’m not drinking absinthe for breakfast, and this isn’t April Fool’s Day in January. Jeff Gahan’s going off the rails with a crazy stadium extravaganza, and we’re trying to make sense of the megalomania.

A source has told the Green Mouse that the site proposed by Mayor Gahan to build a pro soccer stadium in New Albany (let it sink in) is in the vicinity of Indiana University Southeast. That’s all Green was able to get. Note that land immediately north of campus is owned by Indiana University.

But the art of the deal, and all that — and if there’s enough TIF to pawn, almost anything’s possible. Last night:

Exactly where do we place a potential 20,000 seat stadium?
Exactly how much in “incentives” will it cost?
Exactly how many box seats will trickle down to BOW?

The Green Mouse’s source also suggests that New Albany’s bid is a bargaining ploy to move Greg Fischer’s philanthropy in a more positive (cough) direction, and that a stadium site in Jeffersonville is a far more likely landing spot should the stadium be built in Southern Indiana.

Meanwhile, we’re saddened to reveal that the most ideal stadium location of all has been removed from consideration.

Seems the level of toxicity is such that an EPA Superfund cleanup would be warranted, and Jimmy Hoffa might be there, somewhere — and who wants to deal with it?

Not even Duggins, that’s who.