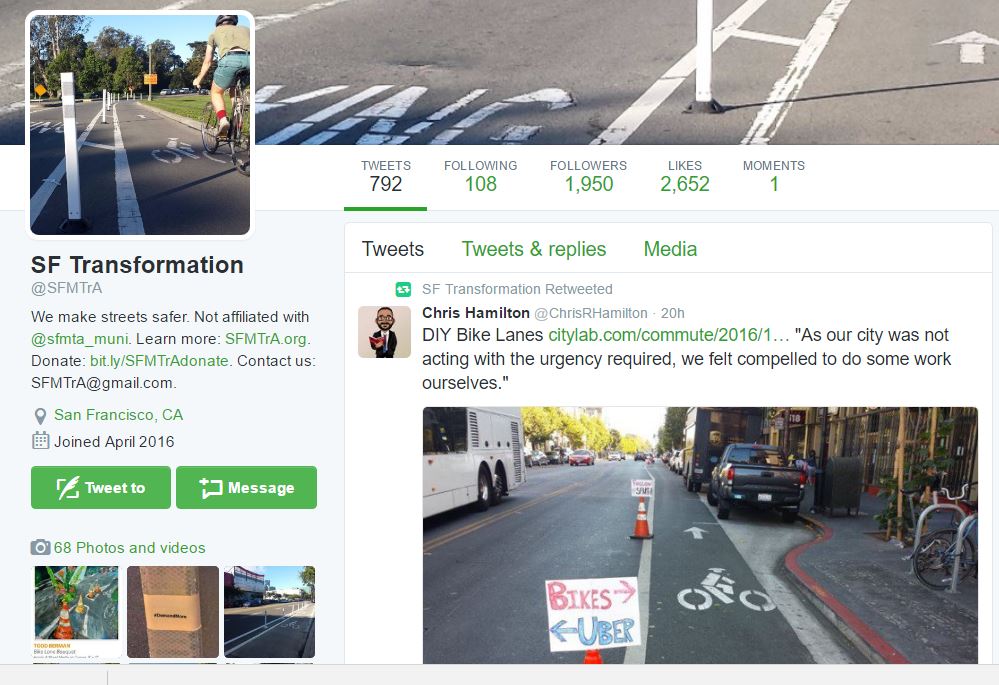 Just remember at all times that if Bob Caesar can’t comprehend what you’re talking about, it means you’re on the right (shared use) track.

We’ve linked to this Frisco coverage previously, but it never hurts to reinforce useful information, whether principled action on behalf of bicyclists, or walkers, but for the most part both.

Like Caesar, most time servers in New Albany municipal government are mystified by the notion of non-automotive transportation. We’ll have to help them understand, won’t we? The realm of ideas is a non-starter with them, so we’ll have to render these concepts tactile.

When it comes to bike lanes in San Francisco, there’s SFMTA—the official transit agency—and then there’s the thorn in its side known as SMFTrA. Their names may look the same at first glance, but don’t be confused.

The San Francisco Municipal Transformation Agency is a group of anonymous traffic-safety activists who formed in response to two deadly hit-and-runs on local cyclists on the same day in June. They’ve performed scores of interventions in areas known to be hazardous to cyclists and pedestrians, typically fortifying bike lanes by lining them with orange traffic cones, or even installing white soft-hit posts in the road.

They’re building the protected bike lanes they want to see around town, and they’ve caused a bit of a headache for local planners this year. Officials have complained the illicit cones and posts violate the city code, impede the work of street-sweepers, and must be removed. As such, the installations usually only last for a day or so. But in October, the SFMTrA scored a victory when the city bowed down and allowed one of their enhanced lanes to remain.

CityLab contacted SFMTrA to find out more about why they do what they do. This conversation has been edited and condensed.

What do you make of your campaign, given it’s one San Francisco ideally shouldn’t need? And how far are you willing to go?

We wish that we never had to do this. Our city should be responsible for ensuring the safety of all citizens using our streets, not just the convenience of drivers. But because our city was not acting with the urgency required, we felt compelled to do some work ourselves.

We are willing to use any reasonable strategy to increase safety for street users and put pressure on city officials to rapidly increase their work to create safe streets.