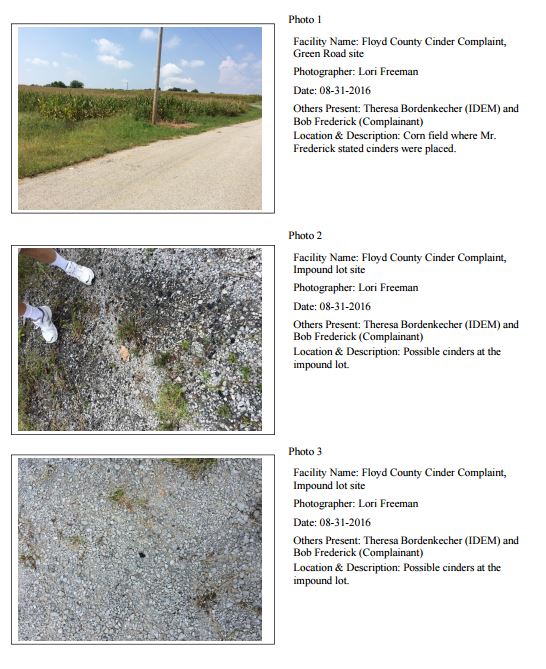 The Green Mouse has been working on this one in his fleeting spare time, and the ironies are wondrous, as just today the News and Tribune’s chief eulogist Chris Morris honors commissioners Steve Bush and Chuck Freiberger, who retired from office and was defeated in a re-election bid, respectively.

SPOILER: Their names appear in the report below.

But let it be said here first that the two made positive impacts on the county through their action and inaction. They both, for the most part, were always professional and courteous to those they dealt with at meetings, including old reporters. They also answered every question I asked through the years, whether after a meeting or on their own time. They always treated me with respect, and while I know the media is used and played at times by elected officials, I never felt that way with these two.

Oddly, the Green Mouse is told that the newspaper’s Morris wasn’t interested in pursuing this potentially important environmental abuse story. File under: Things that make you go hmm …

What appears below, verbatim, is available for public scrutiny at the Virtual File Cabinet of the Indiana Department of Environmental Management’s web site.

There may be a discrepancy in this document, in that the impound lot is located at 1706 and 1610 Hwy 111 on properties owned by realtor Pat Harrison; 1738 is former mayor Doug England’s house.

These tangled webs aside, it’s fascinating reading. Positive impact? The jury’s out on this conclusion, Chris.

TO: Heitkemper Property/New Albany
DATE: 08-31-2016
Impound Lot, VFC File
FROM: Lori Freeman
THRU: Theresa Bordekecher, Chief Industrial Waste Compliance Industrial Waste Compliance
Compliance and Response Branch
Office of Land Quality
SUBJECT: Tempo Complaint # 66455; Green Road and Hwy 11 (.45 mile West), Elizabeth, IN
47117 and 1738 Hwy 111, New Albany, IN 47150
Office of Land Quality (OLQ) Site History:
On August 8, 2016, IDEM received a complaint (Tempo Complaint #: 66455 and 66501) alleging that Floyd County deposited cinders in two locations (one in Harrison County and one in Floyd County). One of the locations was a sinkhole where they allegedly placed approximately 50 truckloads. The complainant also stated that there is a spring approximately .25 mile across the field from where the cinders were placed. On August 12, 2016, Mr. Bob Frederick (Complainant) emailed copies of aerial maps of the “sinkhole” site from 2010, 2011, 2014, and 2012 (see attached). Mr. Frederick indicated that in the 2010 aerial you could see the pile of cinders that had recently been placed at the site.
Inspection Findings:
On August 31, 2016, IDEM staff (Lori Freeman and Theresa Bordenkecher) met with Mr. Bob Frederick (complainant) in Georgetown, IN. Mr. Frederick then proceeded to give background information on the cinder dumping. Below is a summary of the information Mr. Frederick provided verbally on August 31, 2016.
Approximately five years ago, Floyd County was in the process of switching from using cinders on the roads in the winter to salt and needed to remove stockpiled cinders. The cinders were probably fly ash and were obtained from the Jewish Hospital in Louisville, KY. There are two places with cinders and Terry Lawson might know of a third location. One of the locations was a “sinkhole” on Green Road and the other was the Police Impound Lot in New Albany.
Mr. Frederick got several calls about cinders being hauled to the “sinkhole” by citizens five years ago and looked into the issue. Mr. Terry Lawson told Mr. Frederick that he spread and hauled the cinders to the “sinkhole” location. A company called CCE also hauled cinders to the impound lot and county employees helped CCE. Approximately 700 tons were put into the Green Road site and more were placed in the impound lot site. Steve Hall (consultant for the county) and Kevin Fedders (former county employee) were aware of the problem. Mr. Hall said that cinders could be a big problem.
Mr. Frederick claimed that dirt was placed over the cinders in the “sinkhole” but he didn’t know where the dirt came from. Mr. Heitkemper bought the portion of the property with the “sinkhole” where the cinders were placed. Mr. Frederick does not believe that Mr. Heitkemper knew about the cinders. Donna Heinze lives on the corner from the “sinkhole” site and she didn’t know that cinders were bad but Mr. Frederick heard she was now very upset about it.
Theresa Plass works for Don Lopp, Floyd County Manager, and she knew about the cinders. Ms. Pass stated that they tested the cinders and there was nothing in the cinders. When Mr. Frederick asked about seeing the results, Mr. Lopp came in and said to never talk about it again.
Mr. Frederick believes that someone called the DNR about the cinders and used his name. Mr.
Frederick also thinks someone from the DNR called Floyd County and said they had a complaint. Mr. Frederick didn’t mention the cinders again for about 4 years while he worked for the county.
In addition to the cinders, Mr. Frederick claimed that the county has had other issues in the past. One of the incidents was a fire at the county highway department garage. During the fire, paint cans burst and went to the oil/water separator. Mr. Frederick believes it was pumped out and dumped into a creek. Mr. Frederick spoke with the Fire Marshall about the paint but Mr. Seabrook yelled at him for mentioning the paint to the Fire Marshall. Mr. Codwell ran the pumper truck for the county. Some oil barrels were dumped in a fill site on private property by the county. The fill site was called Hintner’s Dump.
During the conversation with Mr. Frederick, he also provided a list of people who had knowledge
of the cinders, these are: 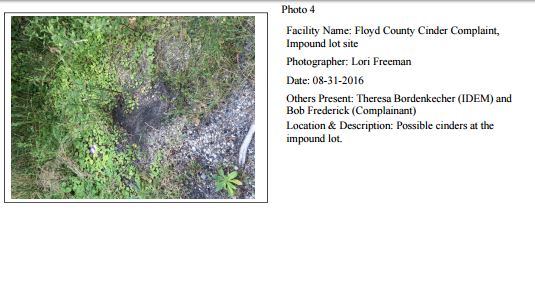 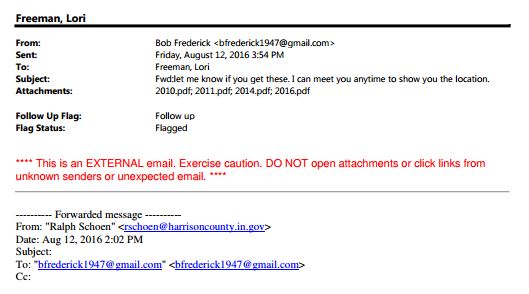 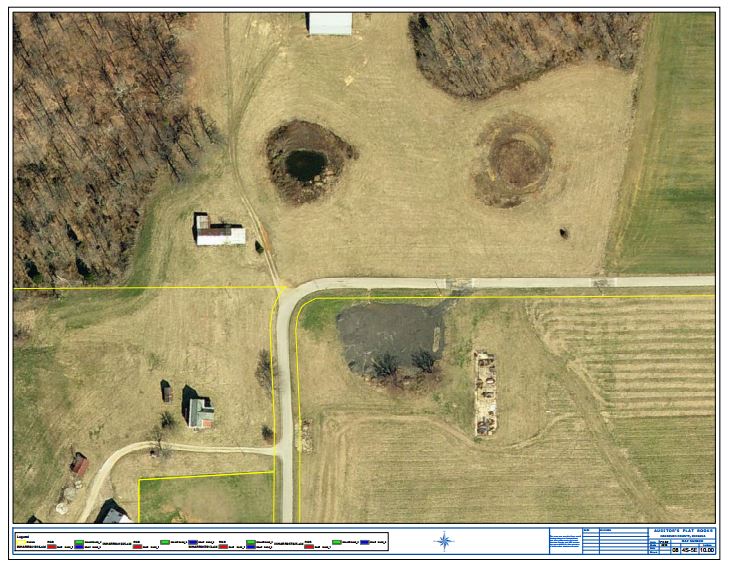 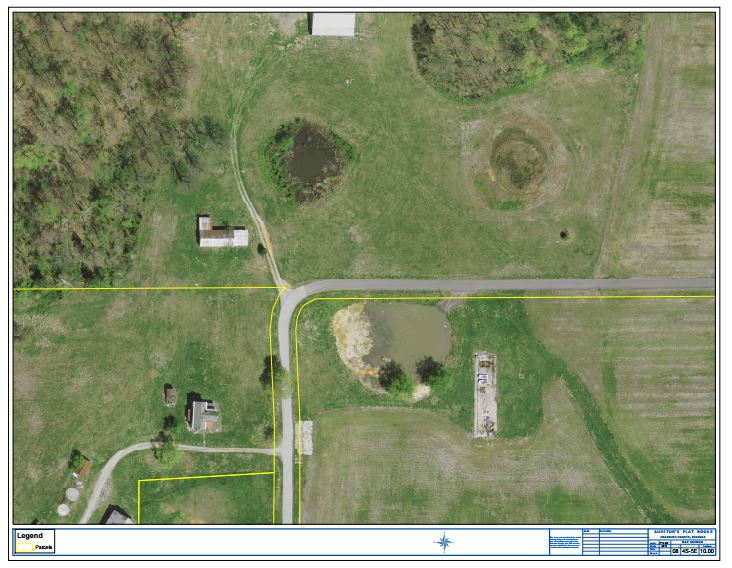 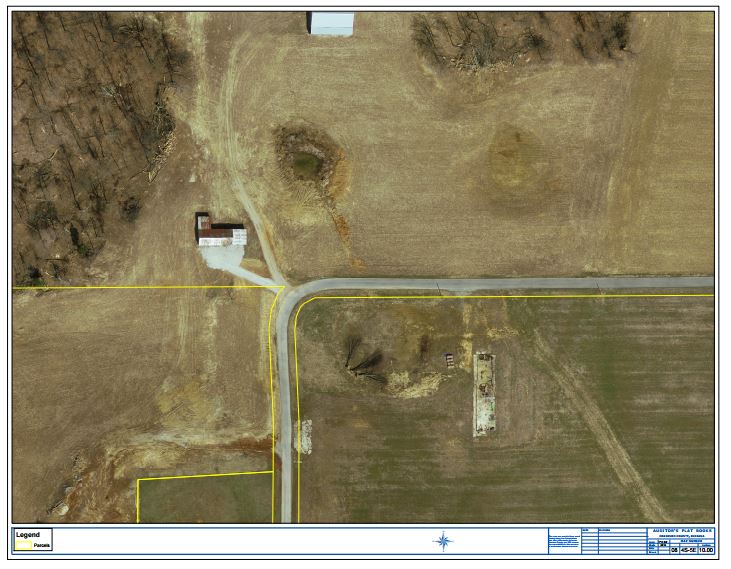 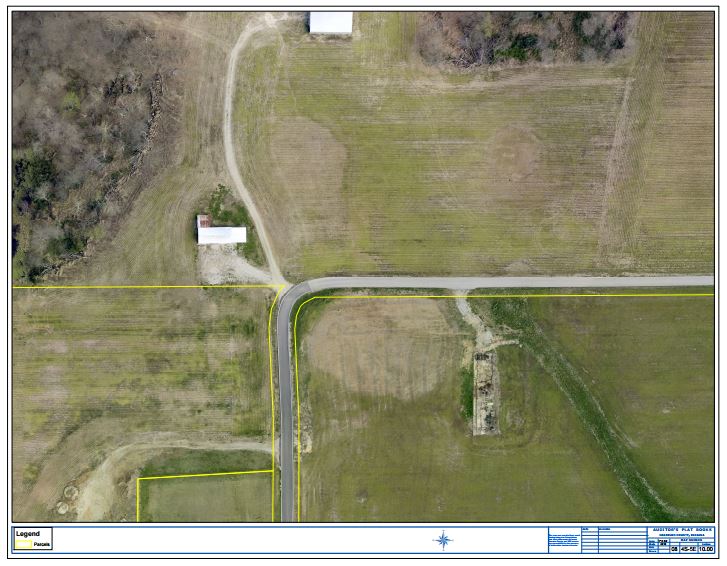