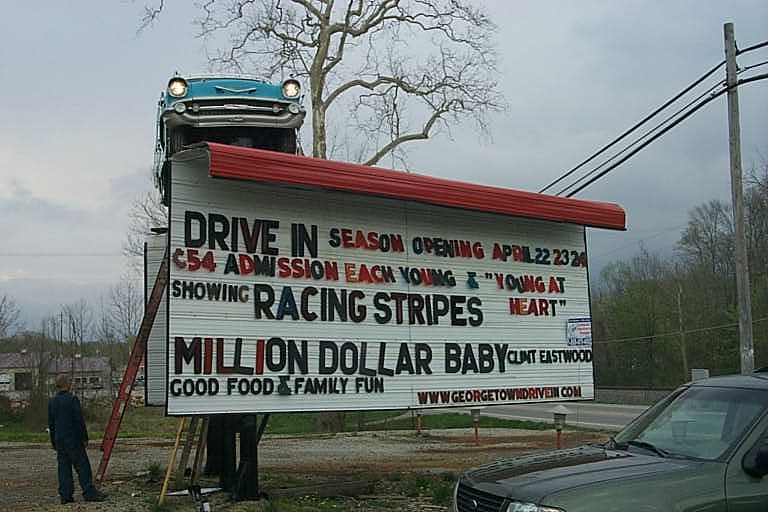 When I was a kid, Georgetown was a place that had an identity of its own. Perhaps more importantly, until 1967 Georgetown had a high school, which was folded into Floyd Central amid the consolidation trends of the 1960s.

If you ask me, Georgetown’s identity crisis began just then, and has proceeded apace during the subsequent half-century.

I’m supportive of any plausible suggestion to restore the “there” to there, but if hopes for renewal hinge on the creation of a boondoggle akin to New Albany’s Bicentennial Park, I’d recommend overt and continuing skepticism.

In short, as we discussed exhaustively in 2012, Bicentennial Park’s design makes little sense according to any coherent criteria, apart from being an excellent way to spend more than $800,000 on flawed symbolism.

Bicentennial Park, Part One: “Whom Does Design Really Serve?”

Bicentennial Park, Part Two: “When did the public input process into this park’s location, imagined functions, design, and construction occur?”

Park comparisons get worse: Breaking ground on an overpriced copy.

Legacy Square? Nah, pie are round, cornbread are square.

Yes, folks certainly enjoy Bicentennial Park when summertime concerts are staged there, but these spectacles cannot take place without an ongoing weekly subsidy from City Hall — thousands of dollars per event, spent over and over again just to make the park functional for a use that apparently no one bothered anticipating.

Good luck, Georgetown. The single best question residents might be asking themselves is how one restores vibrancy to a bedroom community primarily maintained as a component of a pervasive culture of auto-centrism. Just imagine if residents of Georgetown and places like it could make the suburban/regional transit station a centerpiece of its renewal.

One thing’s for sure: If a single New Albany city official appears at your gates to offer advice, you’d be wise to send him or her packing.

… That space could be a park, like Bicentennial Park in New Albany, possibly with temporary stages, playgrounds and a splash pad. A “far out” future plan, for after the town square is finished is what McCllelan’s dubbed “Georgetown Village.”