Now more than ever, we must do what we can to support bastions of free thought.

I plan on doing this by means of heightened financial support for principled journalism (The Nation, CounterPunch) and advocacy (ACLU, Planned Parenthood), and of course the Freedom from Religion Foundation falls into this grouping.

There’ll be others, but for now, given that New Albany’s perennially inappropriate Mayor’s Prayer Breakfast is tomorrow, let’s begin with the FFRF. Below is the organization’s e-mail newsletter, which speaks for itself.

The Freedom From Religion Foundation, based in Madison, Wis., a 501(c)(3) nonprofit educational charity, is the nation’s largest association of freethinkers (atheists, agnostics), and has been working since 1978 to keep religion and government separate.

Continuing to fight for our country


Not surprisingly, the elections were our focus this week here at the Freedom From Religion Foundation. But we didn’t let that monopolize our attention.


We did a lot of work around voting issues in the run-up to the balloting, and we continued that until the eve of the elections. On Monday, we warned everyone about electioneering by churches around the country in violation of their nonprofit status. We educated the public and the media about what is and isn’t permissible as a tax-exempt organization and highlighted some recent egregious infringements.


Then, on Tuesday the elections happened, and we grappled with the results.


“The Freedom From Religion Foundation is not a partisan office or group. But we are realists,” our Co-Presidents Dan Barker and Annie Laurie Gaylor said. “Those who care about the separation between religion and government, as well as religion’s continuing grip on social policy in the United States, must be cognizant that Nov. 8 was a game-changer — and not a positive one for our essential work to buttress the Establishment Clause of the First Amendment.”


(It must be pointed out that we did get some victories on state-church battles that we were intensely involved in: A Colorado death-with-dignity measure passed, and an Oklahoma referendum to put a Ten Commandments plaque back in the statehouse was defeated.)


FFRF Staff Attorney Andrew Seidel had poetic insights to offer on the consequences of the elections:


“Dark and difficult times may lie ahead, but know this:


Andrew wrote a pointed blog on Ben Carson possibly becoming our next Secretary of Education. “One name reveals why the Freedom From Religion Foundation will be essential in a Trump-governed United States: Dr. Ben Carson,” Andrew wrote. He went on to describe the shocking views that Carson holds. “FFRF is going to keep our schools secular. We are going to defend the Wall of Separation. We hope you’ll join us,” he concluded.


Andrew also provided us with some solace this week. A Georgia school district scrapped plans for a proposed bible class partnership with a local Christian group after Andrew complained on FFRF’s behalf. There were some shocking happenings in the district, including the intense harassment of a non-Christian student, and FFRF hopefully mitigated some of that, too. (Keep a look out for other victories next week.)


We had a comforting Veterans Day commemoration Friday at our office in downtown Madison, attended by a number of veterans and other members. It started at the “Atheists in Foxholes” monument at our Rose Zerwick Memorial Garden and Courtyard with short speeches by Dan and Annie Laurie and a special photo-op for veterans at the monument. It then moved to our capacious auditorium for refreshments. To honor veterans, we also took out an ad in a special edition of USA Today. “You’ve been fighting for our secular Constitution and our freedom — let us fight for you,” it said and featured a photo of World War II veteran and FFRF Board Member Joe Cunningham in front of the “Atheists in Foxholes” monument. 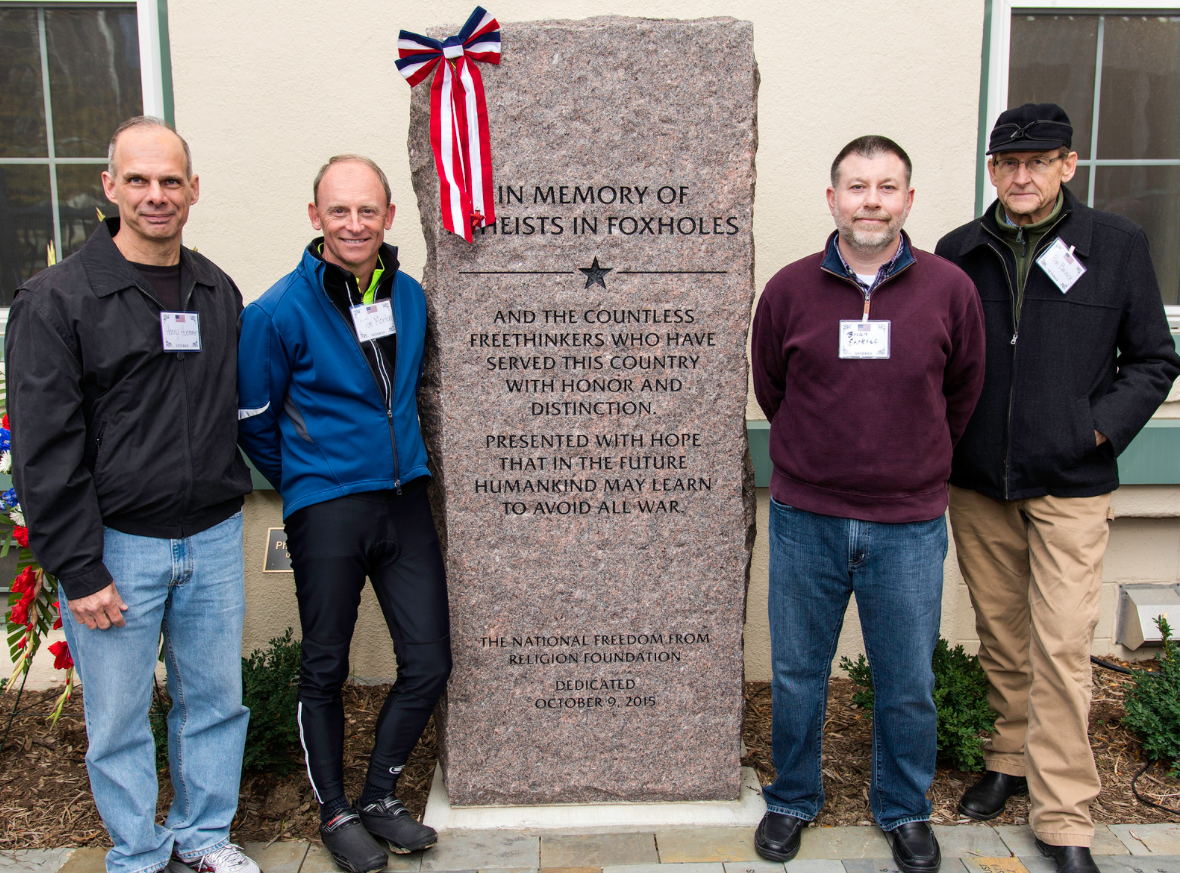 
Alas, on Friday, we received a bit of insulting news: Our local station is cancelling our “Freethought Radio” show because the station is radically changing its format from talk radio to all-Christmas music! Don’t worry. Our show is very much alive. We’re still on in a number of other cities. And you can always listen to our podcast. This week’s show talks about the elections as it relates to the direction of the Supreme Court, plays a defiant version of Woody Guthrie’s “This Land Is Your Land” by Sharon Jones, reports recent FFRF legal victories, and includes an interview with a former nun who is now a none (as in no religion) and has a new book about the experience. We’re looking for a replacement station in Madison, treating the cancellation as an opportunity rather than a disruption.


Whether it was our elections work, our special commemorations, our radio show or our legal victories, we were able to accomplish a lot, and all of it because of your support.