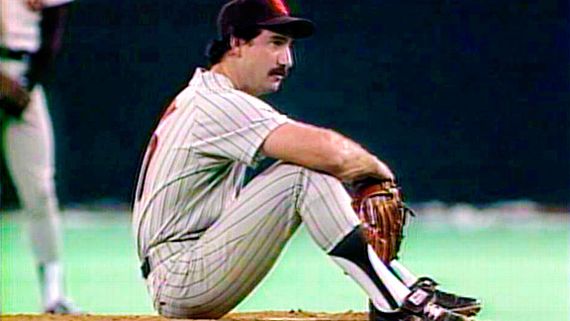 The World Series was enjoyable. As an A’s fan and a history buff, it didn’t matter to me which team came out on top. Either way, “old school” values were being served — except when Jon Lester refuses to throw to first. That’s just bizarre, and it’s something John McGraw wouldn’t have tolerated.

Sitting at home, drinking beer and watching the games, there was plenty of time to kill, and one of the joys of being a baseball fan in the electronic era is instant recall, statistically speaking. In spite of being mathematically challenged, I’ve always loved looking at baseball stats.

Full disclosure urges me to reveal that when it comes to baseball statistics, I’m a proud and unrepentant Luddite. WAR is where my dad was from 1942 – 1945, not “wins above replacement,” the calculation of which I’d be unable to explain with the proverbial gun held to my temple.

It’s unclear to me how a break in the action led me to Baseball Reference Dot Com, though it’s probably because the San Diego Padres famously defeated the Chicago Cubs in the playoffs in 1984. Whatever the reason, soon I was scanning rosters from 32 years ago (say it ain’t so), and there was the name of Padres pitcher Eric Show (pronounced Schau, if memory serves).

He died young, didn’t he?

I had no idea just how young, or knew anything about the back story. It’s a long, sad read, which begins with Show surrendering Pete Rose’s career record-setting hit.

SAN DIEGO — Back then, the news came in on Teletype, not over the Internet. Pete Rose had just slapped two hits at Wrigley Field, bringing his career total to 4,191, and somewhere up there, Ty Cobb was fidgeting  or having a gin and tonic. One more base hit and Rose would break Cobb’s all-time hits record, a mark that had stood for nearly 60 years. Everyone in baseball wanted a bird’s-eye view, but one team in particular was about to see it up close and maybe too personal: the woebegone 1985 San Diego Padres.

A year after reaching their first World Series, the Padres had gone into something of a tailspin. On Sept. 8, the day Rose tied Cobb, a talented San Diego club that featured Tony Gwynn, Steve Garvey and Goose Gossage was in third place, 10 games out. The team was toast. The only good news, depending on how you looked at it, was that the Padres were headed to Cincinnati for three games with the Reds. They’d probably get to witness history, although, on the other hand, one of their pitchers would have to serve up history. One of them was going to live in infamy.

Who was it going to be? As the team dressed in its home clubhouse that Sunday — about to board a flight to Ohio — all eyes turned to the next three men in the starting rotation. One of them was a left-hander, Dave Dravecky, his hair slicked back after a shower, his pulse strikingly calm. Another was LaMarr Hoyt, a former Cy Young Award winner who already was planning to jam Rose with inside fastballs. But a third pitcher sat disconnected at his locker, eyes darting, frown palpable. On his shelf were a book by Ayn Rand and a cassette player full of American jazz. His clothes were black and purple. He carried a guitar. He looked out of place. His own catcher, Terry Kennedy, liked to call him “Angry Young Man” to his face, partly to get under his skin, but also because Kennedy sensed “bad s— always seemed to follow him around.”

So this was what the Padres were going to throw at Rose the next three days in Cincinnati. And as the team bus pulled out of Jack Murphy Stadium, the players couldn’t help but think of Jack Murphy’s Law: Anything that can go wrong will go wrong for Eric Show.