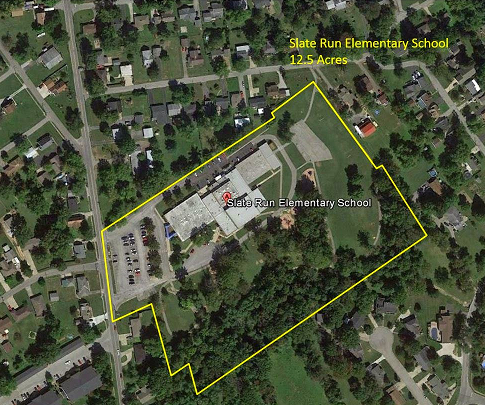 
The “yes” arguments favoring the 2016 variant of the school corporation’s bond referendum are essentially the same as before, when it was defeated by voters during the 2015 primary election. Perhaps unsurprisingly, so are the “no” arguments. Here is one of them. See also:


Our big fat Hibbardendum (2): The more things stay the same, or our school bond referendum, 2016.


ON THE AVENUES: It’s our big fat Hibbardendum, and Jeff Gahan is carrying the superintendent across the threshold as Metro United Way tosses rice and One Southern Indiana steals all the liquor.

Unctuous, thy name is Bruce Hibbard.

Back in February, when the reigning superintendent of the NA-FC schools appeared at a city council work session along with Brad “Actually Earns HIS Pay” Snyder to tout the May referendum, at-large councilman John Gonder cut straight to the chase and said aloud what everyone in the room should have been thinking.

Gonder said school officials didn’t actively lobby the public in support of Silver Street Elementary School when it was on the chopping block.

Now the system is wanting to build larger facilities while a school that children once could walk to has been closed, Gonder added.

“I do think that the school corporation has a strong responsibility to neighborhoods in the city,” he said.

Of course, “neighborhoods in the city” have tended to be the last thing on the school corporation’s mind, apart from demolishing houses near existing schools (does Dan Coffey get a cut of that CCE action, too?), but if we were expecting introspection from Hibbard, it wasn’t happening.

The decision to close those schools — which was made almost five years ago — was in reaction to state funding cuts and other issues facing the system at the time, Hibbard said.

In short: The school corporation, without which Hibbard’s pay packet is rerouted to a tar paper-lined sewer ditch on West 9th Street, must live even if our neighborhoods die.

A subsequent suggestion that “efficiencies” in school administration might include periodic examinations of past policy failures and current golden parachutes was greeted with disingenuousness in the form of Hibbard’s gurgling sounds and palpable condescension; apparently Snyder is quite accustomed to dual duty as primary plan presenter and bucket o’sawdust-bearing cleaner of his boss’s puke piles.

Marohn on transportation funding: “Facing the Unknown with Courage.”

… We’re locked into a transportation system that requires us to lie to ourselves about what we can know about the future and then spend huge amounts to support that lie. When we underestimate our needs, it confirms our bias for building more. When we overestimate, we can explain it away – if we are ever asked to, which we hardly ever are – by citing factors beyond our control (oil price, recession, fickle humans, etc…). This is a dumb system.

JeffG, from whom the link was borrowed, then used Marohn’s main point as a mirror, and held it up to the school corporation.

(Marohn’s point) pretty well sums up the upcoming school referendum, too, in which the school corporation seeks to solidify its commitment to a driving oriented, suburban school model for the foreseeable future.

NA-FC buses already drive enough to circle the globe multiple times in less than a week. We know that’s extremely costly and not sustainable. We know that children, neighborhoods, and our biosphere do better with walkable, neighborhood schools. But, when I suggest refocusing efforts on such walkable schools, I’m told I’m rehashing previous decisions.

The truth is, the current $120 million plan is the one looking backward, extending and exacerbating the misguided trends of the 50s and 60s while ignoring current and future reality. We can’t afford the vehicles, roads, and fuel usage we have now, so what’s the school plan? To use what’s being called a rare financial opportunity to make sure we keep it that way for as long as possible.

We’ve often made the argument that the single worst aspect of New Albany’s archaic one-way street grid is the way it incessantly rows in the opposite direction, 24 hours each day, negating all expenditures and well-intentioned efforts to revitalize urban neighborhoods. The school corporation often functions in similar fashion. It would be easier to support this referendum if it might somehow be a part of a deal to bring Hibbard to the table, to improve the school corporation as a participating stakeholder in the process of civic improvement, rather than an entity seemingly always pursuing autonomous agendas. Pie in the sky, perhaps.

From what can be seen on-line and in social media, pending corrections, the only two May primary candidates to make public their views on the referendum are Al Knable (at-large council) and Cliff Staten (6th district council), both in favor.

There doesn’t seem to be an organized anti-referendum effort, although the comments appended to two posts from January in the Floyd County IN, GOP group at Facebook, most of them by former Floyd County Republican Party chairman Dave Matthews, amply summarize the opposition from a “no new taxes” perspective.

First one
Second one

The pro-referendum case is made on Facebook at Families for Floyd County (the group’s web site is here).

… (Snyder) said the district’s reasoning with the .1937 rate was to anticipate some growth in the assessed valuation of properties across the county.

The DLGF came back and told them to avoid assuming any growth in the values and keep them essentially flat, slightly raising the estimated rate.

Let’s avoid the TIF discussion for now, shall we? It’s only Monday morning, and we’re already exhausted.