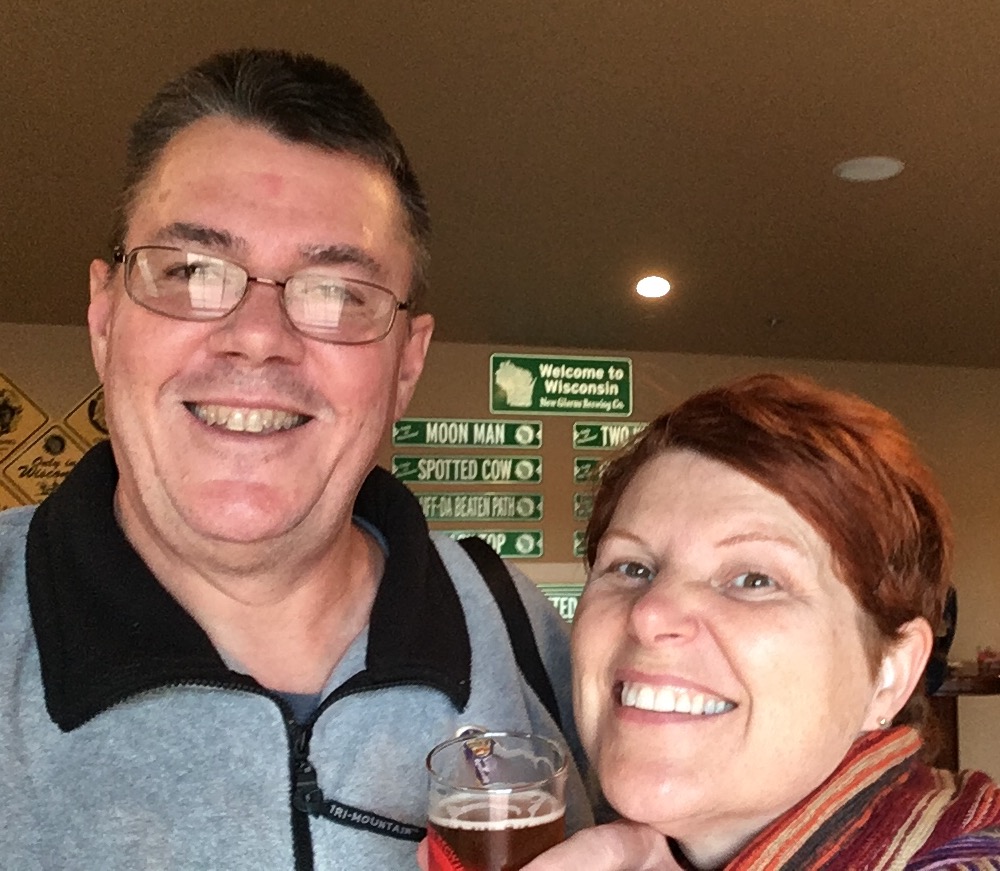 When there’s a combined coffee shop and wine bar only a minute’s walk from your Airbnb, that’s where breakfast is: Barriques on Park Street in Madison, and a fine way to begin the day — with espresso, not pinot noir, although be aware that this establishment boasts an amazing list of $10 wines.

Friday morning’s destination was New Glarus, a small, tidy Wisconsin town situated roughly 25 miles south of Madison. It bills itself as “America’s Little Switzerland,” albeit lacking Alps, but with flair enough that folks who know nothing about “craft” beer still visit for the Old World charm.

We indulged in a round of thrift shopping on the route out of Madison, and I disgorged this perfect $1.00 musical accompaniment for the drive. Think oom-pah with yodeling, and you’ll be close.

It’s hard to imagine many sightseers in New Glarus leaving without learning about the big (and growing) brewery on a hilltop overlooking town.

This is the “new” New Glarus Brewing Company facility, opened a decade ago, where more than 200,000 barrels of beer are brewed yearly. The “old” plant just down the road adds more than 50,000 barrels to the total, all of which is available only in the state of Wisconsin.

To place these numbers in context, consider that the state of Indiana only recently has breweries even approaching the 50,000 barrel level.

New Glarus Brewing Company is a case study in excellence, and this is true in so many ways that enumerating them in depth would require a university business course term project, something far beyond this brief sketch.

Nonetheless, an overview includes the uniform quality of the beer itself, the decision some years back to distribute only in Wisconsin, the beer tourism approach embodied by the hilltop brewing shrine, the architectural design of this shrine, employee ownership of the company and female management of it … and I’ve only scratched the surface.

This year was our fourth or fifth visit to the brewery, which we’d toured previously. This time the sampling bar and gift shop proved sufficient, with a beer enjoyed outside in the garden. In recent years, this comfortable expanse has been augmented with mock abbey ruins and other clever amenities like the rinsing station, a retrofitted vintage console from a German brewhouse. 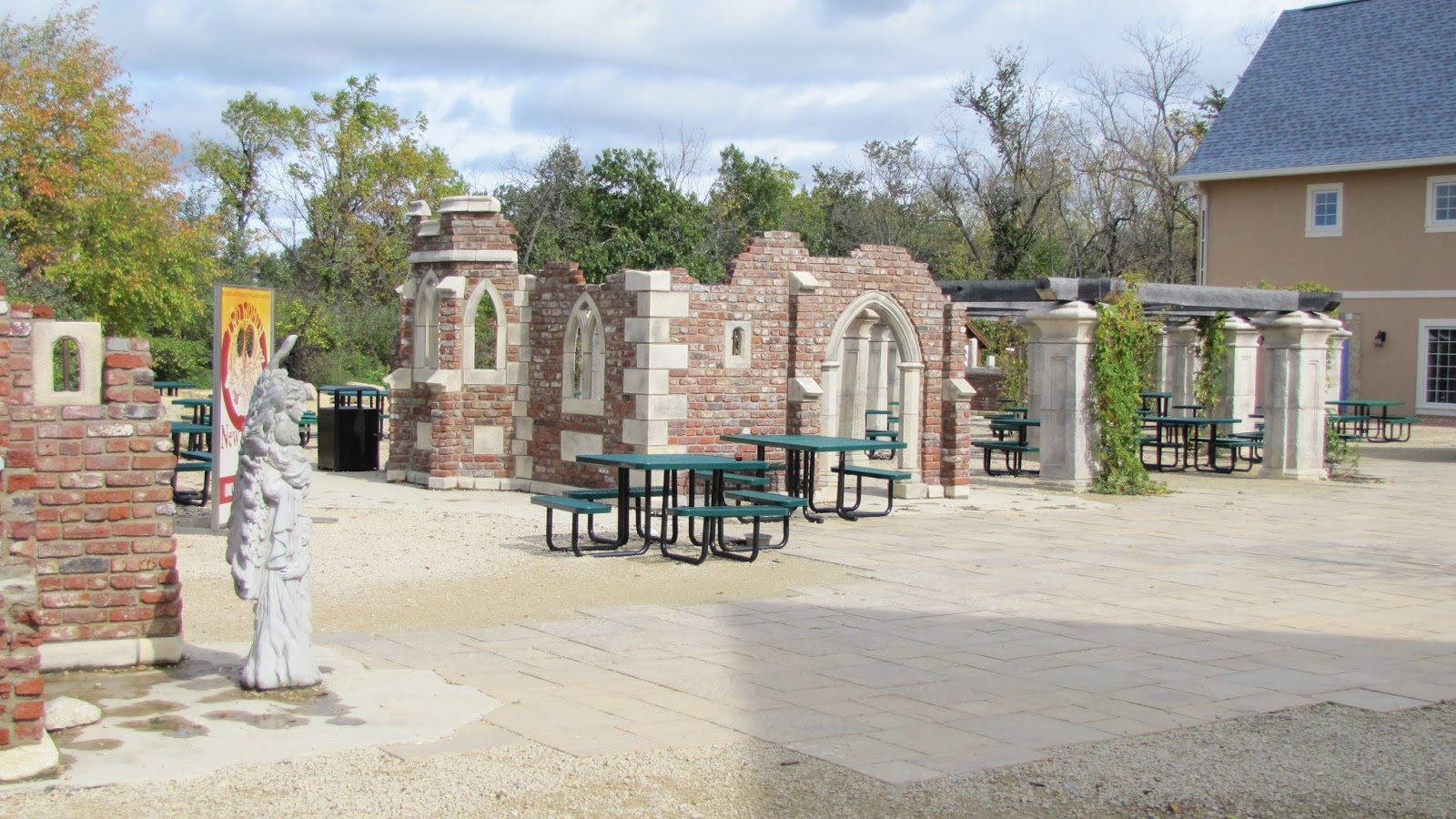 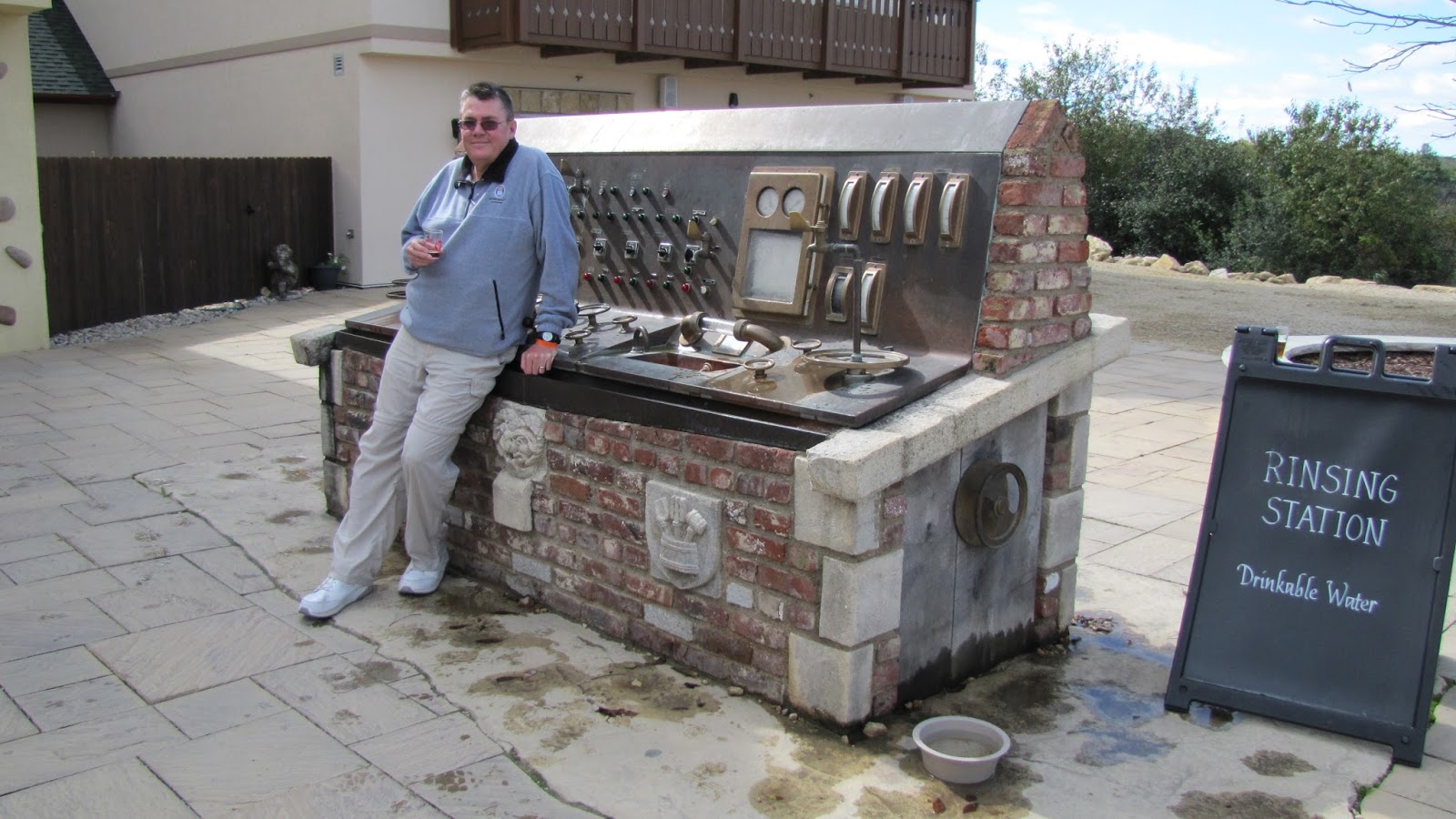 As always, the final stop was the takeaway beer warehouse. To visit the brewery during the second weekend in August on the occasion of the Great Taste of the Midwest is to learn that incoming brewers from out-of-state emulate swarms of locusts, generally removing more ought-after brands from the shelves. Going in the off-season (those 51 other weekends) is better.

I pay little attention these days to beer ratings, but at least several of New Glarus’s renowned fruit-based sour ales were available for purchase, along with plenty of the brewery’s delicious styles from the German pantheon: Staghorn Octoberfest, Zwickl, Two Women Lager and Uff-da Bock.

I’m glad they had two-wheelers.

After loading the trunk at New Glarus Brewing, and before considering where the luggage would be stowed on the return trip, it was time descend the hill and proceed to Glarner Stube, a perpetually packed Swiss-German restaurant with New Glarus beers on tap and sauerkraut the way it’s supposed to be, this being a particular passion of mine when dining out. My choice of beer was Spotted Cow, because … when in Rome.

Out on the main street of New Glarus, I had fun walking back and forth in the crosswalk, from one side to the other, experiencing the amazing sensation (for a New Albanian) of having drivers actually yield to pedestrians, just the way they’re supposed to do, but don’t, because Irv Stumler says no one in our sity speeds or drives hazardously.

Later, back in Madison, there was cocktail hour at the Wonder Bar Steakhouse and a much needed nap before dinner. Located a short walk away from the pad, Mini Hot Pot was the choice for our evening meal, and make no mistake: We need one of these in Louisville.

The new Mini Hot Pot on South Park Street is particularly inviting on a cold, windy, gray day. The small restaurant’s specialty is bubbling broth in individual hot pots, served with colorful plates of meats and vegetables that diners cook themselves, fondue style.

Owner Vincent Chang explained that hot pots are traditional in northern China, where the winter weather is similar to Wisconsin’s. Historically, he said, an entire family would gather around one boiling cauldron of seasoned broth, dipping in ingredients and sharing the soup.